The project tracks the impact of Islam in Europe throughout history, focusing on positive achievements in medicine, philosophy, architecture, and food, as well as the migrant crisis and recent terror attacks.

The exhibition includes items of historical interest, as well as “artistic” installations showing the full-face veil and fake terrorist bombs.

The project, in the EU’s capital, has cost the European taxpayer €2,500,000 according to the website of the European Commission, the unelected executive branch of the EU. A statement claims:

“The historical evidence displayed by the exhibition – the reality of an old-age Muslim presence in Europe and the complex interplay of two civilisations that fought against each other but also interpenetrated each other – underpins an educational and political endeavour: helping European Muslims and non Muslims alike to better grasp their common cultural roots and cultivate their shared citizenship.”

Isabelle Benoit, a historian with Tempora, the organisation that designed the exhibition, told AP: “We want to make clear to Europeans that Islam is part of European civilisation and that it isn’t a recent import but has roots going back 13 centuries.”

However, after the Paris attacks in November 2015 and the Brussels bombings in March 2016, authorities and organisers were forced to postpone the arrival of the touring exhibition in the city. Organisers also struggled to find a venue as many were concerned that the event would attract controversy.

The exhibition finally opened on the 15th of September at the Vanderborght Building, which is owned by the Brussels city authorities.

“Should we cancel it or at least postpone it until happier circumstances? Definitely not, we believe,” the website insists. “It is precisely because the timing is tragic that it is important to show our contemporaries the extraordinary richness of this history, which has helped to make us what we are.”

In fact, the event’s website claims that the timing of the event, during a wave of Islamic immigration and terror, is significant and some installation references the migrant crisis and Islamist attacks. 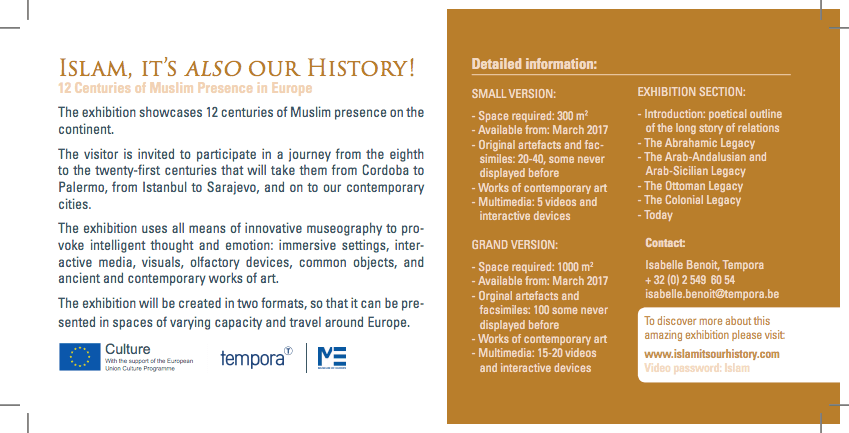 An installation by Danish artist Nikolaj Bendix Skyum Larsen commemorates migrants who have drowned attempting to cross the Mediterranean Sea, and an installation by a U.S. artist, Gregory Green, shows a Louis Vuitton case with a fake bomb inside.

The website says: “It turns out that our exhibition comes at a very relevant time in history when the meeting between Europe and Islam is witnessed by citizens from the continent in all its tragic manifestations – massive and chaotic waves of immigration, senseless terrorist violence, feelings of alienation, incomprehension and hostility.”

The opening of the exhibition comes as the EU releases a report claiming Muslims are discriminated against in the labour and housing markets in Europe due to their names and the way they dress.

A third of Muslims in Europe said they had faced discrimination when looking for jobs in the past five years, according to the report published on Wednesday by the EU Fundamental Rights Agency (FRA).