Up to 30 Tory MPs are thought to be gearing up to sign a letter calling on the prime minister to resign after her disastrous conference speech, which reportedly left Theresa May “extremely distraught”.

After losing the Tories their majority in the snap election, Mrs. May’s address was supposed to reassert her authority and reassure the party she was ready to lead the nation through Brexit talks and into the next general election.

The speech, however, was marred by a coughing fit so persistent it looked as if she might not finish, the set collapsing behind her, and a professional prankster handing her a P45 notice of unemployment form, purportedly from her rival and Foreign Secretary Boris Johnson.

Whilst the Cabinet and party members rallied around her in public, loyally rising for a standing ovation, in private many were frank about their pessimism for her future.

One Tory MP told The Telegraph she was “limping like a broken horse into oblivion” and suggested discussions of her departure will have to be “accelerated”.

A Cabinet minister said she was “extremely distraught” after the speech, which her allies were hoping would help her bounce back after the failed election campaign.

According to the paper, on Wednesday night, as many as 30 Tory MPs were thought to be prepared to sign a letter calling for her to resign, with one drawing comparisons to the Labour Party “sleepwalk into defeat” under Gordon Brown. 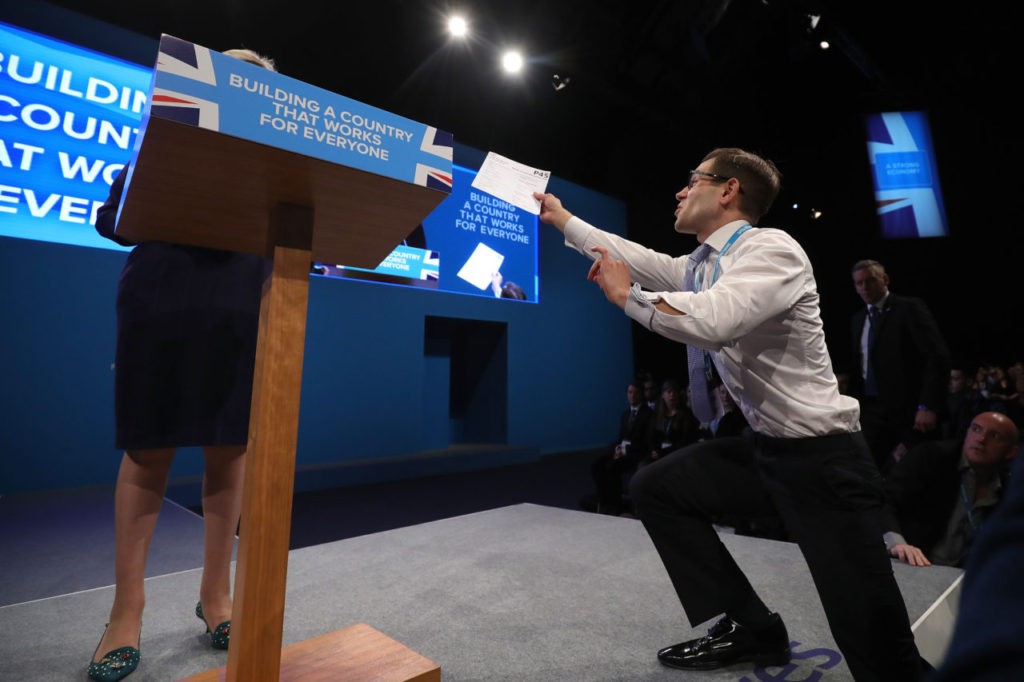 Comedian Simon Brodkin, aka prankster Lee Nelson, hands Prime Minister Theresa May a P45 during her keynote speech to delegates and party members on the last day of the Conservative Party Conference at Manchester Central on October 4, 2017 in Manchester, England. (Christopher Furlong/Getty)

A senior Conservative source said: “The public are far more brutal about these things. They will see a Prime Minister who looks ill, with the stage set falling down. It will compound many of the views that they already have for her. It should be a wake-up call at the moment.

“There were great policies in her speech, and nobody will be talking about them. We’ve not just been unlucky here, there have been some real, real failings.”

Another minister said: “Things are moving quite quickly. Conversations are being held. The plates are moving more fundamentally now. She has to decide.”

During her speech, Mrs. May announced a series of policies that could be seen as a shift to the left, towards Jeremy Corbyn’s Labour, including a cap on energy prices and millions spent on social housing.

However, her apology, and acceptance of responsibility, for the Conservatives’ disastrous snap election campaign overshadowed the policy announcement.

She said: “We did not get the victory we wanted because our national campaign fell short. It was too scripted, too presidential, and it allowed the Labour Party to paint us as the voice of continuity, when the public wanted to hear a message of change.

“I hold my hands up for that. I take responsibility. I led the campaign. And I am sorry.”