A European Union (EU) bank could refuse to return billions of euros of British taxpayers’ money for more than 30 years, whilst the bloc demands the UK pays tens of billions towards a so-called Brexit ‘divorce bill’.

As a shareholder, the UK owns 16 per cent of the European Investment Bank, but might not get its cash back until 2054, the bank’s vice president Alexander Stubb has said. Britain’s share is jointly the largest, equal in size to Italy, France, and Germany’s.

Mr. Stubb described Brexit as a “travesty” but denied the move was a punishment. “The EIB has leveraged the economy of the UK many, many fold over the years,” he told BBC Radio 4’s Today programme.

He also rejected claims in a House of Lords report earlier this year that the bank may owe the UK £9 billion taking into account reserves and profits, claiming the UK has just 3.5 billion euros (£3.1 billion) of capital at the bank.

He said, “actually, that figure is not exactly correct,” implying the UK’s relationship with the bloc could “go sour” and the UK owes 35 billion euros to the EU. 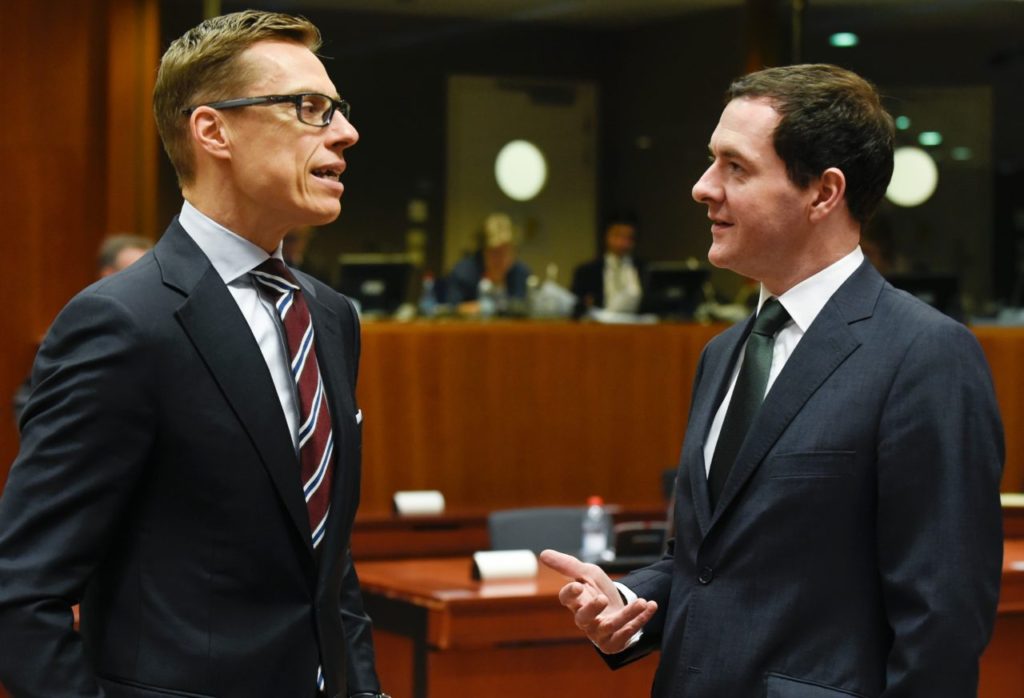 Alexander Stubb (L) speaks with George Osborne (R) during an Economic and Financial Affairs meeting at the EU Headquarters in Brussels on December 8, 2015. (JOHN THYS/AFP/Getty)

He said: “You can divide it into two bits. The first bit is what we call ‘paid in capital’ so that is what the United Kingdom has paid into the EIB since 1973 and that amounts to approximately £3 billion [3.5 billion euros] and then there is something called ‘uncalled capital’ which is like a guarantee that if things go sour the UK will pay and that figure is 35 billion [euros].

“I think everyone on both sides of the negotiating table agrees that we have to pay back the 3.5 billion [euros] basically in cash and that will happen over a long period up until 2054 because that is when the loans are amortised over the years.”

Mr. Stubb was then asked if that meant that it would take the best part of 30 years for the UK to get the £3 billion back and he replied: “It does.”

“Obviously if we lived in a perfect world the United Kingdom would continue as a member but our statutes and the EU treaties don’t allow that.”

So far, Prime Minister Theresa May has hinted the UK will pay a 20 billion euro Brexit divorce bill, although EU negotiators have demanded much more.

Since February, the EU’s Brexit negotiating team, led by Michel Barnier, have been threatening to block talks progressing until the UK pays the unspecified sum, which could be as high as 100 billion euros.

A House of Lords committee and UK negotiators have insisted the bill has no legal basis and Brexit minister David Davis has called on the EU to be more “pragmatic” and “flexible”.

Mr. Barnier, however, said his team would not move “one iota” from the mandate given to them by the other 27 member states and has attempted to push back and delay trade talks.