Brexit leader Nigel Farage told Breitbart News Daily listeners that visiting historic battlefields will help them understand the sacrifices their countries made as the U.S., Britain, and Europe begin to re-embrace the nation-state.

Speaking to hosts Breitbart Chief Executive Stephen K. Bannon and Breitbart London Editor in Chief Raheem Kassam on the 99th anniversary of Armistice Day, which coincides with American Veterans Day, the World War One French battlefields aficionado remarked on how the Great War ushered in a new world: the fall of the Ottoman Empire, the rise of Communism, and a century of bloody conflict.

“World War One was also the first time ordinary people volunteered in their millions to go and fight in the British army… It’s a war involving all the citizens,” he told Sirius XM listeners on Saturday.

Asked by Mr. Bannon if he thought the people of that time were fundamentally different to people now, Mr. Farage noted that “the values that people had back then in many ways made them better people than they are today.”

“They had quite a strong fundamental Christian belief that went right through society. They believed in country, they believed in family, and they were prepared to make sacrifices to defend the nation and to defend their people. And I’m not quite sure, 100 years on, that we’re the same society, sadly.”

However, Mr. Farage pointed to the sea-change that began in 2016, when “the nation-state had a comeback”.

“It was the year people said, ‘We’re not prepared to live with globalism, with liberalism, with being embarrassed about our culture, our heritage, who we are as a people.”

"When you go home, tell them of us and say: 'For your tomorrow we gave our today.'" https://t.co/2WNCSve73h

Pointing to the Brexit and Trump victories, as well as the gains for populist parties in Austria and the Czech Republic, Mr. Farage said, “there is definitely a reawakening of the concept of nation”.

With that rise in belief in the nation-state comes a resurgence in interest in the world wars, the UKIP Member of European Parliament observed, stating that Vimy Ridge alone sees three-quarters of a million visitors a year.

“When I used to visit sites in France and Belgium 30 years ago, you’d arrive at a major battlefield or cemetery and you could park at the front. Now, there are coach loads of people there.”

“Brits are going to these [battlefields and cemeteries] in unprecedented numbers to try and understand what they mean.” 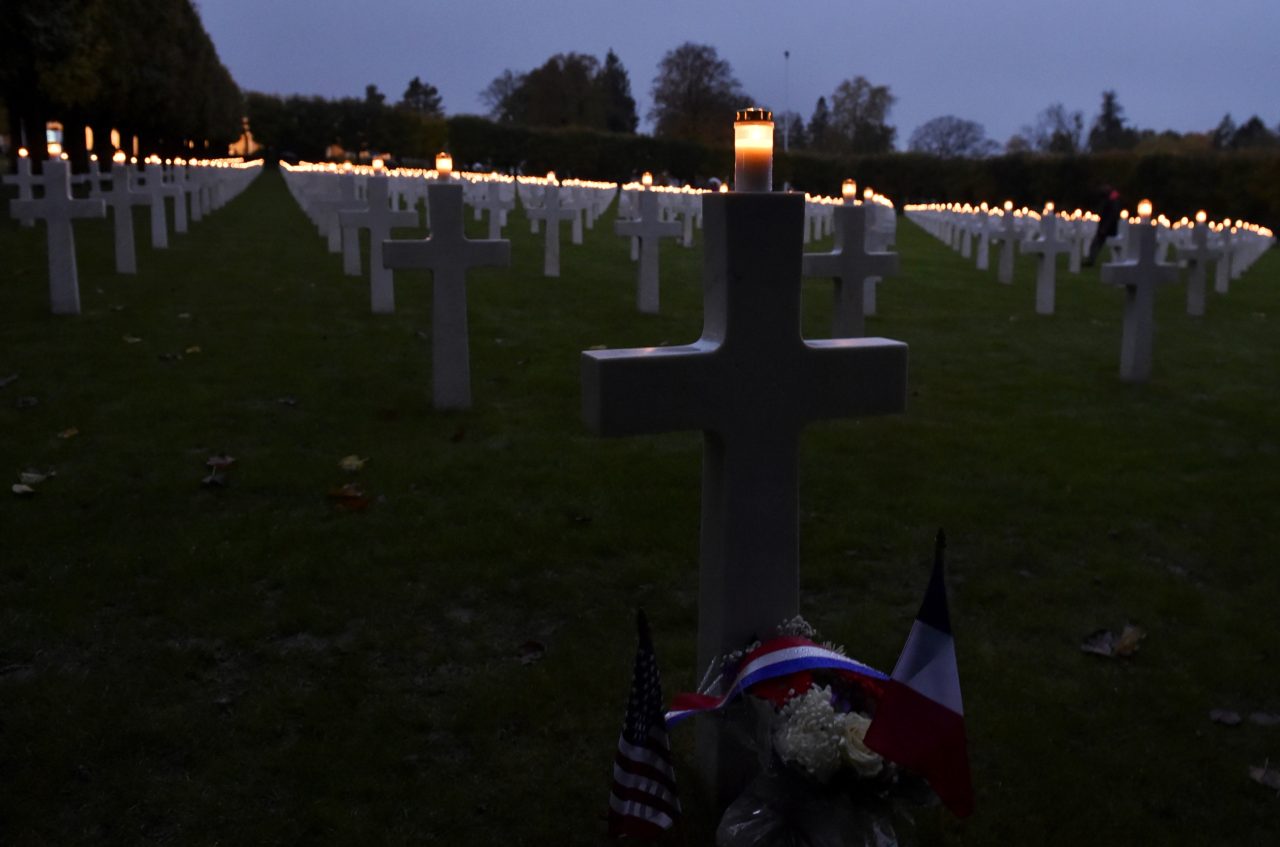 Headstones with lighted candles are pictured at the Meuse-Argonne American Cemetery and Memorial on November 11, 2017 in Romagne-sous-Montfaucon, eastern France, during the Armistice Day commemorations marking the end of WWI. (Photo by JEAN-CHRISTOPHE VERHAEGEN/AFP/Getty Images)

Defending the reputation of France, a bloodied battlefield in two world wars barely two decades apart, from criticism because she fell in 18 days in 1940, Mr. Farage said: “Literally, France gave everything and more in the four and a half years of the First World War.”

“And not just devastating losses to soldiers, but vast parts of the French countryside were laid to waste. Germans retreating blew up churches and set fire to libraries. Everyone says, ‘Oh, of course, all that barbarity was pure Nazism.’

“No it wasn’t. there was something actually there within German imperialism that was deeply unpleasant. And it had to be fought, and it had to be beaten,” Farage noted, and referenced Jack Pershing, the general in charge of the Americans on the Western Front, who wanted Germany’s unconditional surrender – not an armistice – for fear that, in 20 years, Europe would be engaged, as it was, in another devasting war.