Brexit leader Nigel Farage has blasted “mad” European Union (EU) fishing rules at a protest on the Thames outside Parliament against the government’s “capitulation” on fisheries after Brexit.

The former UKIP boss was joined on Wednesday morning by pro-Brexit Tories, including MP for Aberdeen South Ross Thomson, at the demonstration against Theresa May’s decision to bow to EU demands for the UK to follow the Common Fisheries Policy (CFP) for years after Brexit.

Leading Tory Brexiteer Jacob Rees-Mogg watched from the river bank, explaining he had a committee meeting to attend later in the morning.

The protest was organised by Fishing for Leave, which explained in a statement that the terms of the so-called ‘transition period’ will, in fact, be worse for the fishermen than current arrangements, as they will remain bound by EU rules for two years with no say in setting them. 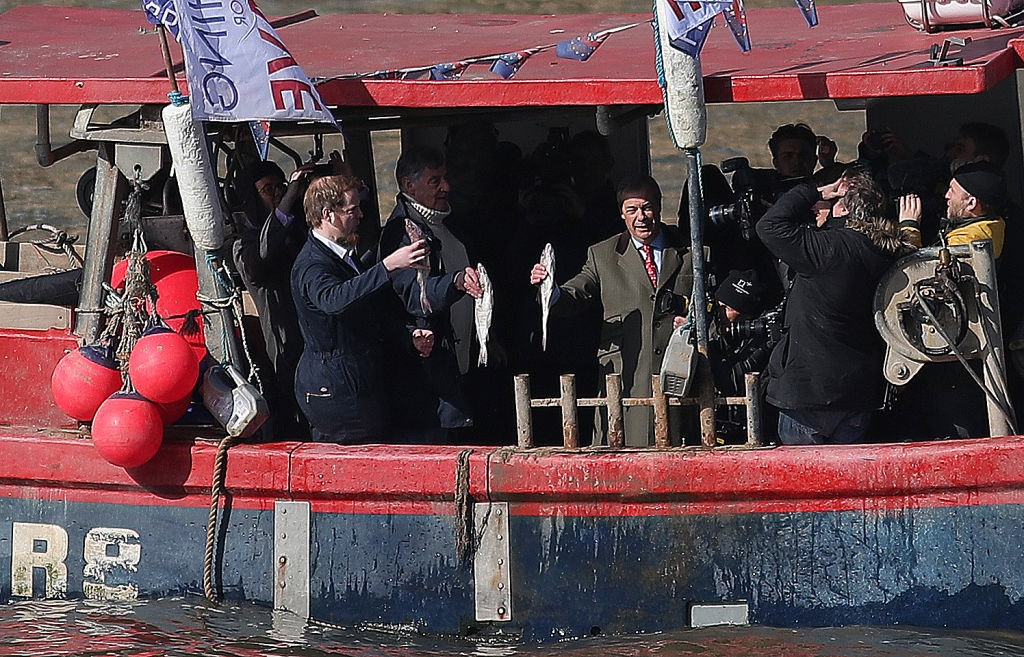 A boat decorated with flags and banners from the pro-Brexit ‘Fishing for Leave’ sails past Britain’s Houses of Parliament to allow fishermen, and former UK Indepence Party (UKIP) Leader Nigel Farage (C), to throw fish into the River Thames in London on March 21, 2018, in protest against the proposal for Britain to effectively to remain in the Eropean Union’s Common Fisheries Policy for almost two years after Brexit day in March 2019. / AFP PHOTO / Daniel LEAL-OLIVAS

They added: “Fishermen are furious that, in having to obey EU rules but with no resource, the EU could implement and enforce detrimental legislation to cull what’s left of the British fleet along with abolishing current rules such as the member state 12-mile limit which protects inshore and shell-fishermen.”

Under European Union rules, British fishermen take on average just 90,000 tonnes of fish from UK waters, while the EU flagged fleet takes some 760,000 tonnes — compelling UK trawlers to throw much of their catch back into the sea to meet catch quotas — wasting tons of precious food. By throwing the already caught and dead fish into the river Thames, the protest will hope to hammer home this unnecessary and deeply damaging waste forced by EU rules to legislators and the public.

“This government doesn’t have the guts” to take back control of our waters. @Nigel_Farage says “hundreds of fishermen could go bust” during the Brexit transition period pic.twitter.com/Pvv8eovZZ8

Mr. Farage has previously described regaining control of fisheries as the “acid test” for a successful Brexit, and even the Tory environment secretary Michael Gove indicated Tuesday he was disappointed with the “sub-optimal” deal.

From a fishing boat on the river, Mr. Farage told Sky News that, “anyone [who] criticises these fish being put back into the Thames, just go a few miles down the river, and you will see, every day, thornback rays being chucked back to rot on the seabed.”

“The whole thing is a disaster,” he blasted, before launching a pair of dead fish into the water in front of the House of Commons. 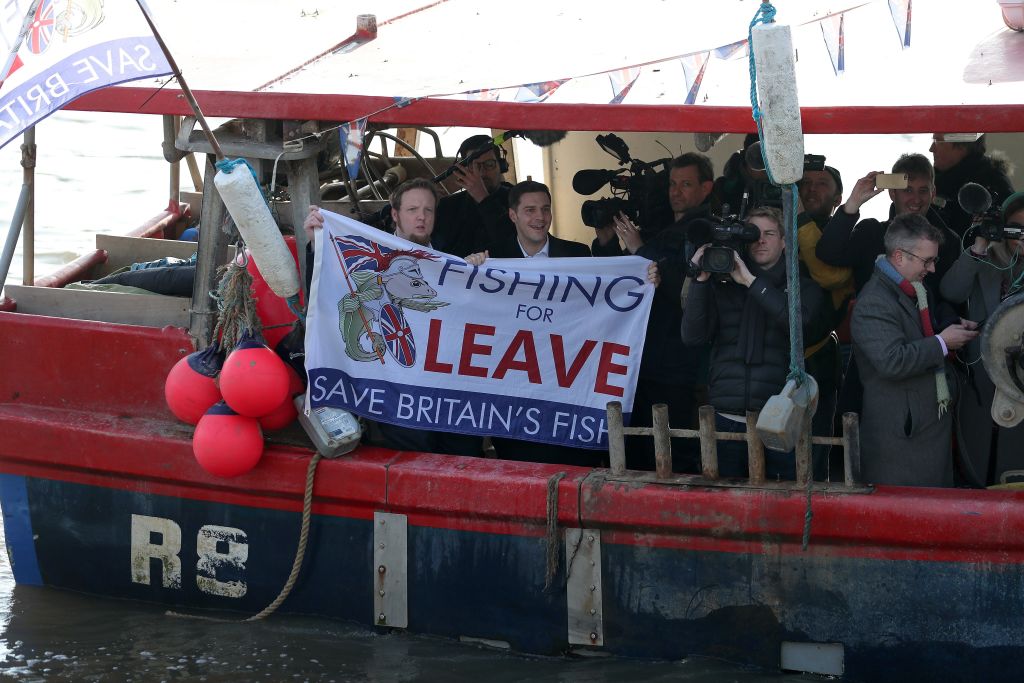 “The only thing we are missing is Bob Geldof,” he added, referring the pop singer who mocked pro-Brexit fishermen demonstrating before the referendum in scenes dubbed the ‘Battle of the Thames.’

The fish have been dumped in the Thames… @Nigel_Farage dropped a couple in and the drama is over here at Westminster. First of many #Brexit protests to come by Fishermen. @GMB pic.twitter.com/59eCOCIZCv

Mr. Farage continued: “Promises were made, and they haven’t been kept. Secondly, we can talk about the fishing industry and jobs within it.

“The ludicrous situation is haddock stock in the West Country at the moment are very good indeed. Yet, the total allocation for haddock, the British fleet gets nine per cent.

“What it means is guys are going out fishing for other specifies, catching haddock because they can’t avoid them, and having to throw them back. It’s just mad – the whole thing.”

Fishing for Leave added: “The CFP forces British fishermen to discard half the fish they catch (the approximate equivalent of 1 billion fish portions), they then have to catch and kill more just to find the “right” species their quota allows them to keep.

“Brexit would have allowed a change to new UK policy of limiting time at sea in return for landing all catches so vessels catch less but land more allowing a bright future for fish, fishermen and coastal communities.

“Being trapped in the transition means being subjected to the EU discard ban where vessel will have to cease fishing on exhausting their lowest, most pitiful quota and will reluctantly go bankrupt.”

Mrs. May is currently leading a minority government, and a number of pro-Brexit and Scottish MPs have already threatened to rebel over this issues, which could stall the entire Brexit process.

The rebel Tory members of Parliament sent a letter to the Prime Minister this morning, making clear if the fishing issue was not resolved she could expect to have her Brexit bill defeated in Parliament — an act which could imperil the government. The Guardian reports an excerpt of the letter, which states:

The commission’s draft withdrawal agreement envisages that the UK will remain in the CFP during the implementation period but with no say over EU policy or annual quotas. The effect of ending discards during this period without compensating measures will be a further disaster for the UK’s already shattered fishing fleet, particularly for the inshore fleet, further eroding prosperity in vulnerable coastal communities. These demands are completely unacceptable and would be rejected by the House of Commons.