Fishermen around the United Kingdom rallied Sunday to protest the government’s apparent betrayal of their industry during Brexit negotiations, with Brexit leader Nigel Farage attending a symbolic boat burning in Kent.

Around 200 vessels around the country protested Theresa May’s Brexit deal which would see Britain’s fishing industry forced to remain in the European Union Common Fisheries Policy during the so-called ‘transition period’ from March 2019.

Throughout Britain’s time in the European Union, harsh fishing quotas imposed by the European Union for the benefit of continental fishermen saw the British fleet lose 60 per cent of its strength and around 100,000 jobs.

Fighting for freedom. The time to protest is now. 🔥 pic.twitter.com/4IB9qzm7bK

Nigel Farage, who previously said control of Britain’s waters was an “acid test” for whether Brexit had been successfully completed said in an address to fishermen and fishing supporters Sunday that the present deal wasn’t good enough. He said:

“Brexit was about taking back our sovereignty which means our territorial waters, and the government are saying for the transition period we are going to stay part of the [Common Fisheries Policy], that’s a disaster… it’s not good enough it isn’t honouring what people actually voted for. Isn’t it funny, this industry was sold out on the way into Europe, and it is being betrayed on the way out as well. ” 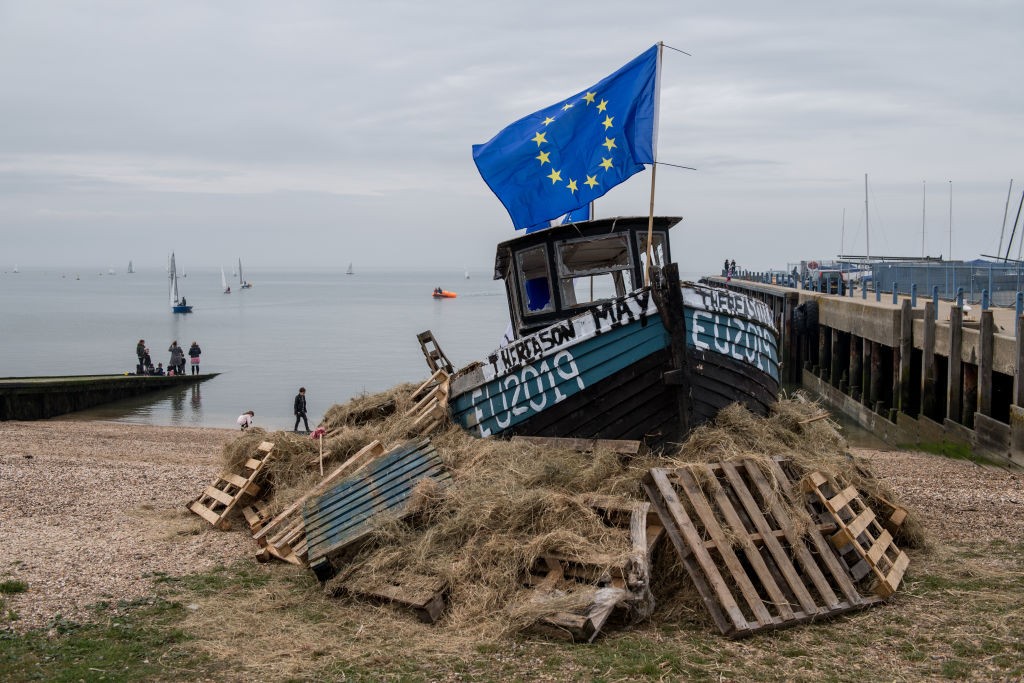 WHITSTABLE, ENGLAND – APRIL 8: A boat is seen on top of a bonfire prepared to be set alight as fishermen take part in a nationwide protest against the Brexit transition deal on April 8, 2018 Chris J Ratcliffe/Getty Images 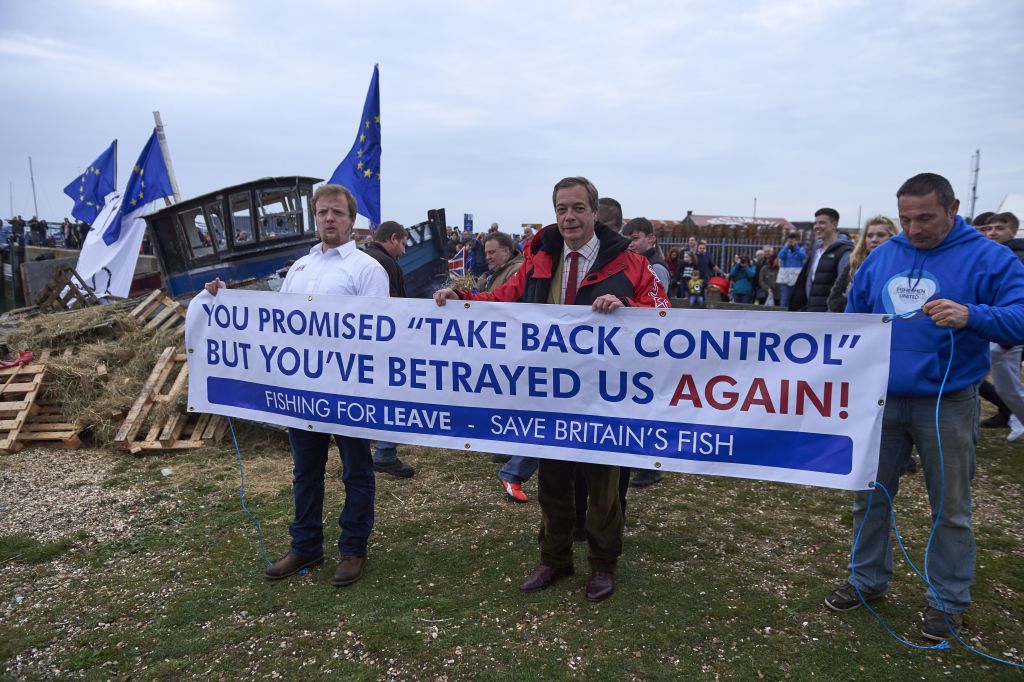 The #CoastalCommunitiesCount protest was organised by pro-Brexit group Fishing For Leave, the same body which took a anumber of fishing boats up the river Thames in the final weeks before the 2016 Brexit vote. Met outside the houses of Parliament by aged rocker Bob Geldoff on what was described as a “floating in palace”, the ensuring scrap between depressed working class fishermen and the extremely wealthy musician proved a major publicity coup for the leave-supporting side.

Besides Whitstable, other protests took place around the country in Milford Haven, Newcastle, Portsmouth, Plymouth, and Hastings. 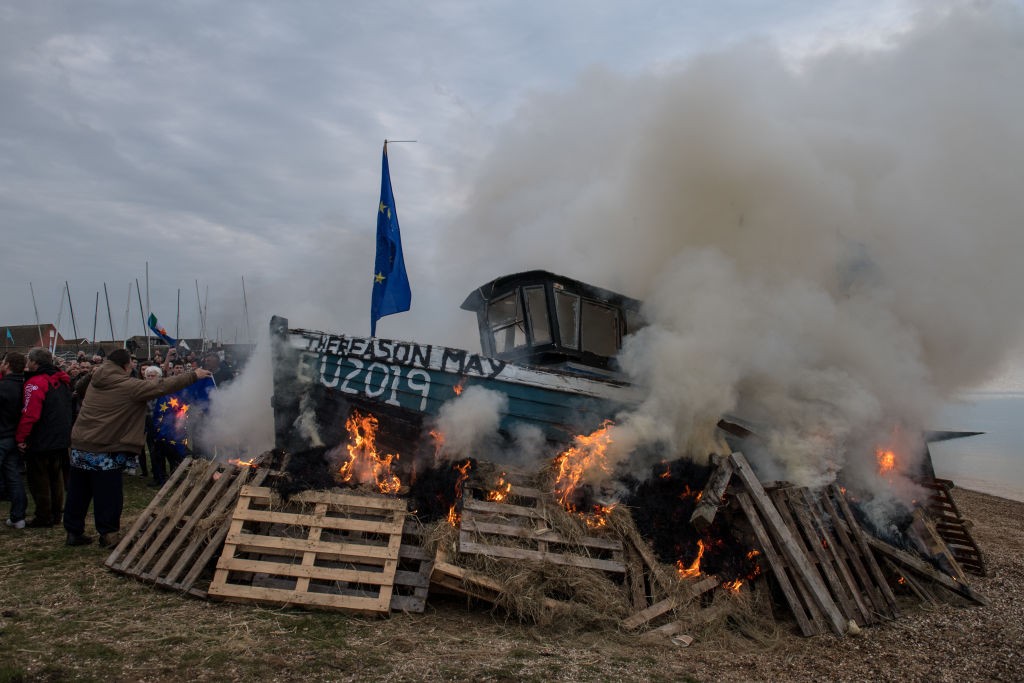 The fire is lit / Getty Images 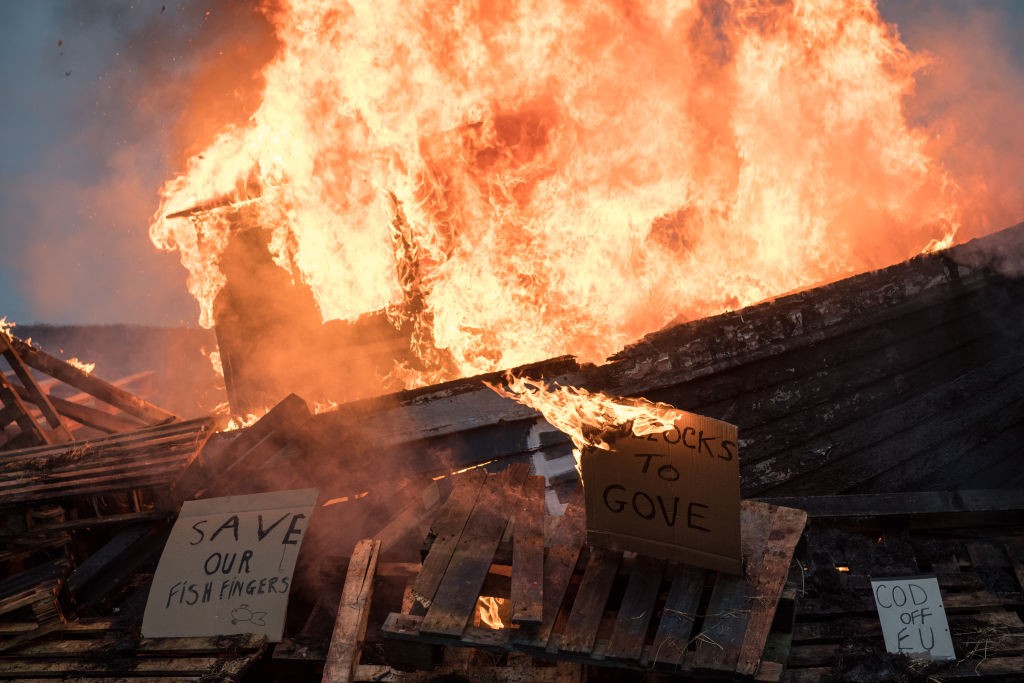 Breitbart London reported the remarks of a Fishing for Leave spokesman, who made clear the importance of not allowing Britain’s fishing fleet to remain subject to the CFP for years after Brexit. He explained: “The ‘transition’ is not just a 21-month delay but a death sentence for what’s left of the British fishing industry, as the EU will be free to enforce and impose detrimental rules on us to cull what’s left of the UK fleet.

“This would then allow the EU to use international law, UNCLOS Article 62.2, which says if a nation no longer has the capacity to catch its own resources it must give the surplus to its neighbours,” he explained.

“The EU would be free to easily eradicate what is left of our fleet and has every incentive to do so.” 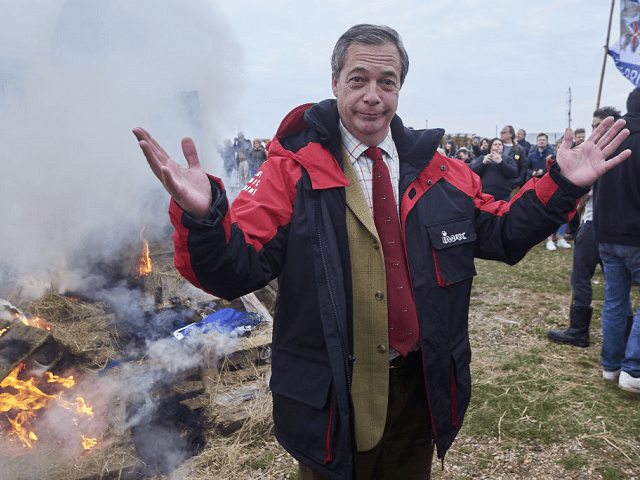 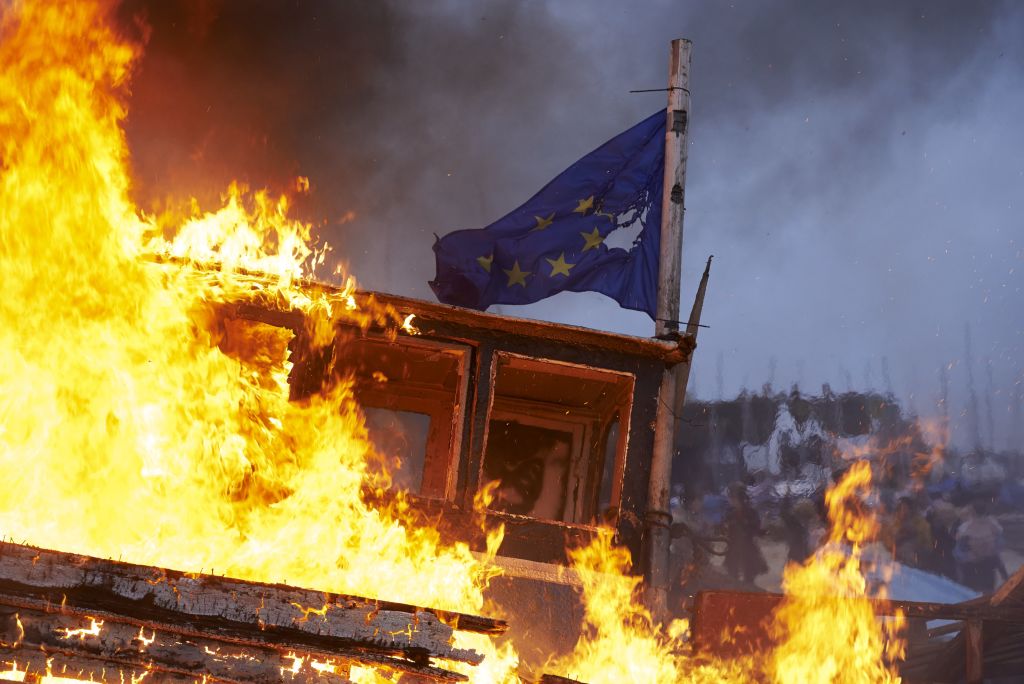 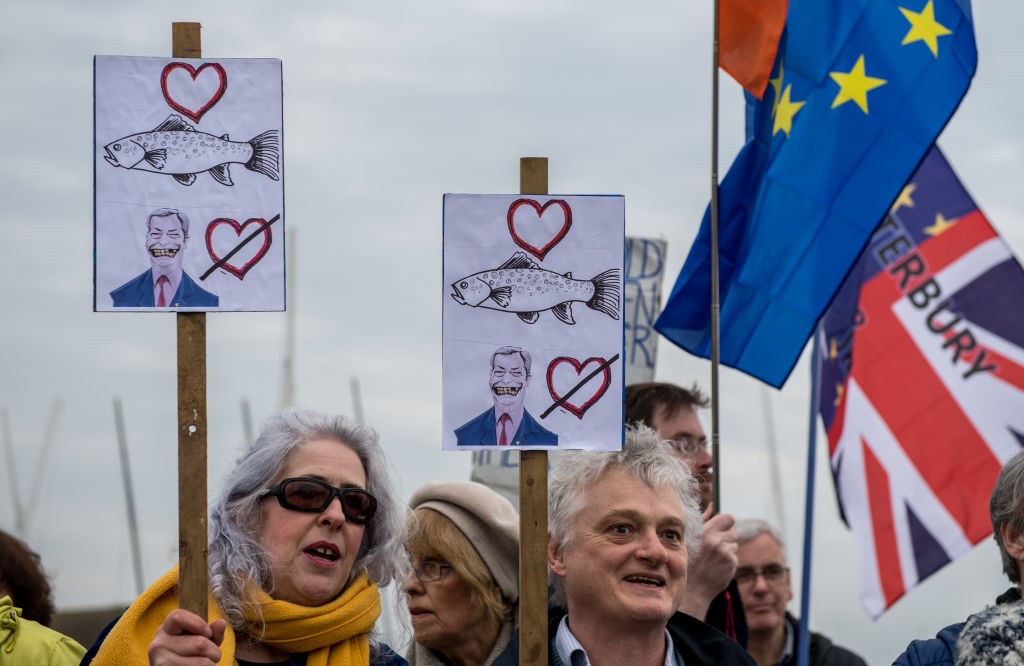 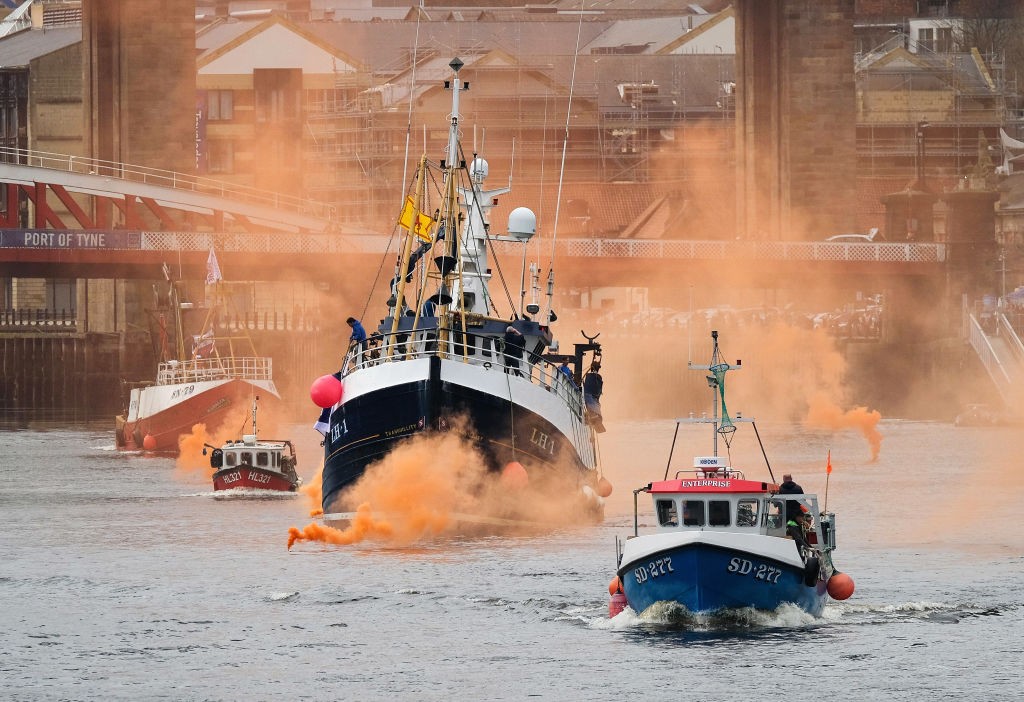 NEWCASTLE UPON TYNE, ENGLAND – APRIL 08: Fishing boats head downriver on the River Tyne as fishermen take part in a nationwide protest against the Brexit transition deal on April 8, 2018 / Forsyth/Getty Images 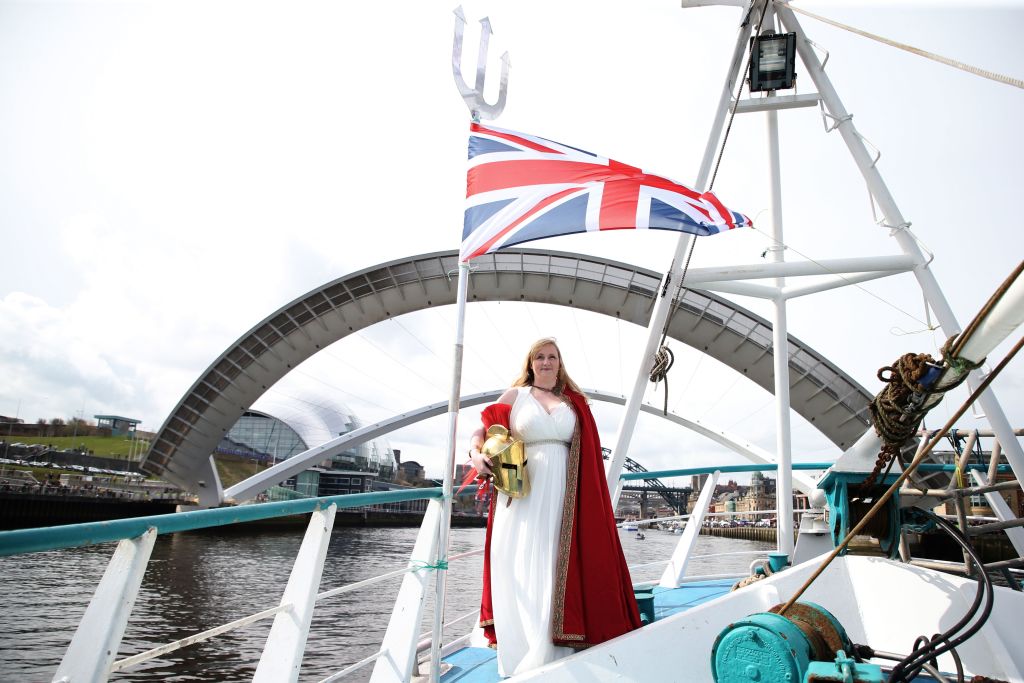 A woman dressed as Britannia, poses on deck as a flotilla of fishing vessels passes under the Millennium Bridge in Newcastle, northeast England on April 8, 2018, during a protest against the Brexit transition deal that would see Britain continue to adhere to the Common Fisheries Policy after formally leaving the EU. / AFP PHOTO / SCOTT HEPPELL