Far-left extremists fighting alongside Kurdish militia groups in Northern Syria have expressed support for their fellow far-left compatriots in France who have been recently evicted from several major squats, saying they may return and help fight the French state.

The group “Antifascist Forces in Afrin” released a video statement, which has since been removed, on their Facebook page claiming that they were willing to engage and resist the French government following clashes between French police and anarchist squatters in Notre-Dame-des-Landes and Tolbiac University over the last month.

The eviction from Tolbiac University in Paris, which occurred last week, saw minor clashes with police but according to a report from newspaper Le Parisien, the squatters, who were occupying the building since March, had caused more than a million euros in damages.

Screenshots of the video along with the accompanying description still exist on social media thanks to French journalist and terrorism expert Nicolas Henin who posted them on Twitter. The image and a statement are also posted on the notorious far-left Indymedia platform which previously hosted the now-banned German Antifa website linksunten.

The extremists compared the Turkish military operations in northern Syria to the evictions in Notre-Dame-des-Landes saying: “We lost Afrîn, at least for now. We refuse to lose Notre-Dames-des-Landes.”

The group then described sabotaging infrastructure in France as well as blocking off roads and train tracks in response to the actions of the French state.

“We fought al-Qaeda and al-Nusra. We fought the Islamic State and the Turkish State. We will fight the French State with the same determination. We will no longer allow them to interfere in every aspect of our lives. The enemy started this war, not us. But we will be the ones who put an end to it,” they wrote.

“Our priority targets are the Turkish state and the French state, as well as all the fascist groups,” they wrote and added that they wanted to practice “guerilla” tactics and will target police, military, and intelligence officials who they claim are “powerful but not invulnerable”.

Antifa groups in Germany, who are also allied with Kurdish groups like the Kurdistan Workers’ Party (PKK), took responsibility for at least one firebombing attack on a Turkish mosque earlier this month following a number of other attacks on Turkish mosques and Islamic centres.

Last month, a pair of activists affiliated with the group in Thuringia were caught by police with chemicals, high-explosives, and a mobile bomb factory. At least one of the extremists had ties to a member of the Left Party in the region. 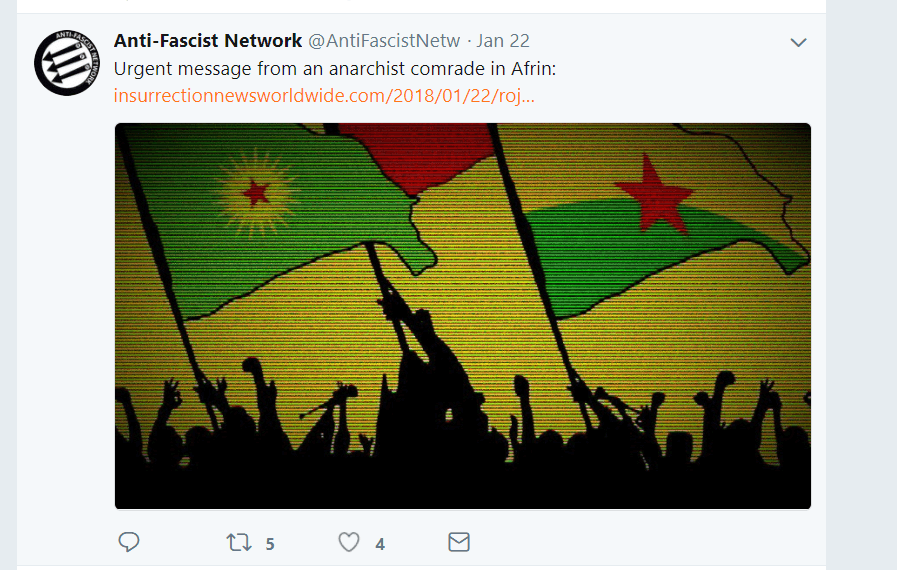 In the UK, the Twitter account “Antifa Network” has shown support for Antifa members fighting in Northern Syria. They also recently helped spread the location of a private conference held by the anti-mass migration Generation Identity UK group where Antifa engaged in violence with one extremist being arrested by Kent Police.

The conference location was initially published by far-left activist organisation HOPE not Hate (HnH) whose head researcher Dr. Joe Mulhall has previously tweeted out to “Antifa Network” when the HnH released a report on the UK Identitarian movement and back in 2015 when he asked for their thoughts on a documentary he filmed in the Kurdish area of Northern Iraq.