The European Court of Auditors has estimated that 18 per cent of legal residents in the European Union — over 90 million people — are first- or second-generation migrants.

The Court estimated that around 4 per cent of the population — 21 million people — were first-generation legal migrants from outside the EU, with the jump to 18 per cent when second-generation migrants are taken into consideration, highlighting how mass migration continues to transform receiving nations beyond the initial influx.

It issued its extraordinary estimates in a briefing paper on “integration”, which conceded the bloc faces the significant “challenges” integrating the many newcomers, and highlighted the alarming increase in the number of migrants arriving via the asylum route claiming to be refugees. 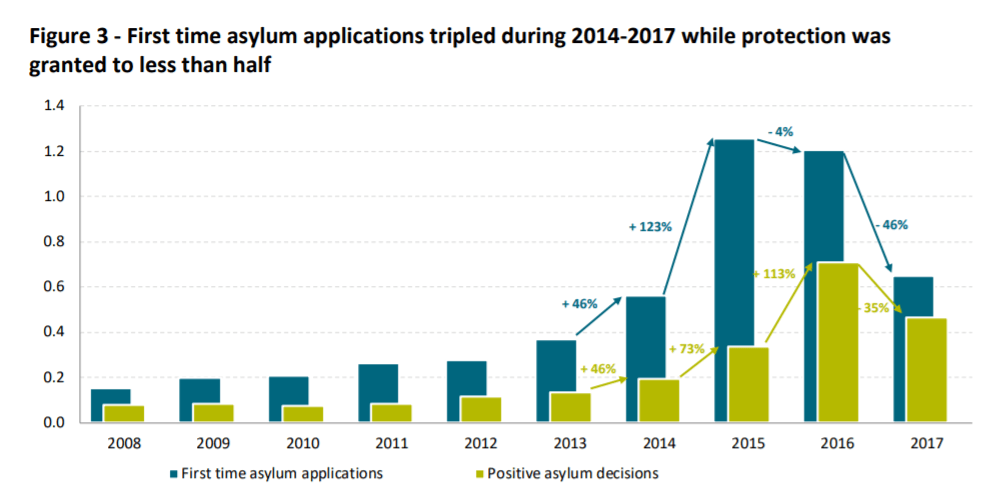 However, the briefing paper notes that the plurality of the migrant population living in the EU without EU citizenship — 39 per cent — has established itself through chain migration via family reunion.

This is a migration route the Donald Trump administration in the U.S. is attempting to restrict, but the Court of Auditors — somewhat paradoxically — actually recommended it as an “essential” integration tool in the EU.

Individual EU member-states — including the United Kingdom, at least until after Brexit goes through and the mooted Brexit ‘transition’ period ends — would have difficulty restricting family reunion-based chain migration on their own initiative, as the European Council deems it a “right” under EU Directive 2003/86/EC.

We need a 21st century MERIT-BASED immigration system. Chain migration and the visa lottery are outdated programs that hurt our economic and national security. https://t.co/rP9Gtr2E5N

It should be noted that the briefing paper does not appear to consider the migrant-descended population beyond the second generation, which is considerable in countries such as Britain, France, and Germany, which have been bringing in large numbers of migrants from North Africa, South Asia, and Asia Minor for decades.

The briefing paper explicitly does not consider the migrant population which is resident in the European Union illegally, which is also considerable — with the illegal migrant population of Britain alone estimated at over a million by David Wood, former Director-General of Immigration Enforcement.

The Court does note that the migrant population is concentrated in just five EU member-states, with Germany, Spain, France, Italy, and the United Kingdom playing host to 77 per cent of the total migrant population — while countries which have resisted mass migration, like Hungary and Poland, remain overwhelmingly homogeneous.

The European Court of Auditors is well known in the United Kingdom in the context of the Brexit debate, having failed to give the European Union budget a clean bill of health 22 years in a row up to 2016, when it issued a “qualified” opinion on the accounts rather than an “adverse” one for the first time.

A year later, MEPs increased the Court’s “entertainment” budget by €45,000 to €270,000 so it could “cover the costs of several events linked to [celebrating] the 40th anniversary” of its operation — a move which raised eyebrows among eurosceptics.