PARIS (AP) — Police on Wednesday cleared out about 1,000 people from the largest makeshift migrant camp in the French capital, which became a focal point in France’s immigration debate.

The mainly African migrants were moved out of their tent camp along a canal used by joggers and cyclists on Paris’ northeast edge, put in buses and taken to gymnasiums in the region as bulldozers ripped out the tents. Several hundred migrants apparently fled before the evacuation.

Two migrants drowned this month in canals along encampments and others have been injured amid rising tensions in the filthy, crowded camps, adding pressure for authorities to act. But the evacuation was delayed for months amid bickering over what to do with the migrants.

“To stay one month here is very, very, very bad for me. All the people have sicknesses and not have food,” said Farouk Ahmed from Sudan.

The encampment held at least 1,400 migrants, local officials have said, but 1,016 were evacuated. Two other makeshift camps in Paris holding some 1,000 migrants are expected to be cleared next week. 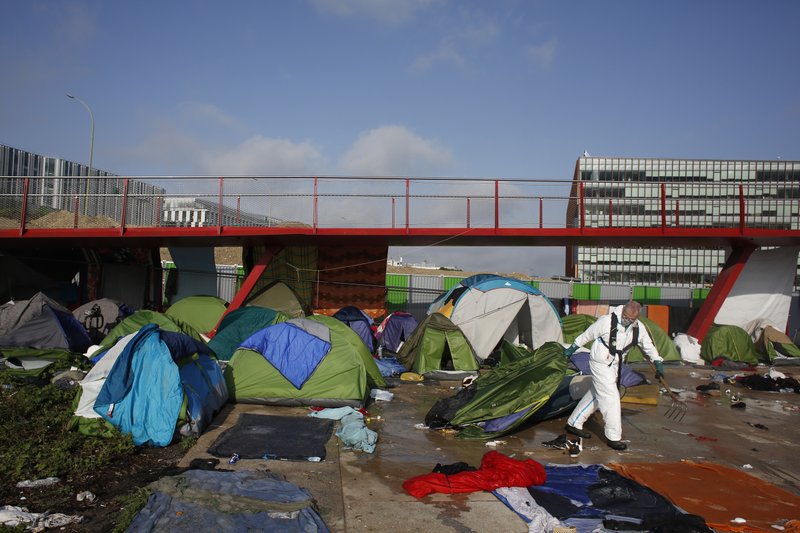 A Paris town hall worker clears a migrant makeshift camp, in Paris, Wednesday, May 30, 2018. The mainly African migrants were being moved out of their tent camp along a canal used by joggers and cyclists on the city’s northeast edge, put in buses and taken to gymnasiums in the Paris region. Bulldozers then tore down the tent city along quay. (AP Photo/Thibault Camus)

Police have cleared out some 28,000 migrants from Paris camps in the past three years, but the arrivals continue.

President Emmanuel Macron wants a tough response to migrants arriving in France. Two days ago, he nevertheless opened the way to citizenship and a job for a Malian migrant who scaled a building and saved a young child dangling from a balcony in what Macron called “an exceptional act.” A video of Mamoudou Gassama’s feat went viral, gaining him the nickname “Spiderman.”

“This is very good for refugees … refugees are helping people,” Ahmed said of Gassama’s heroism, claiming that the French regard refugees as “bad.”

A migrant from Chad who was moved to a shelter said he had applied for asylum — meaning he should not have been living in an encampment.

“It has been hard here. It’s dirty. There is no toilet. No shower to wash in … You don’t eat well here,” Ousmane Tahir said. 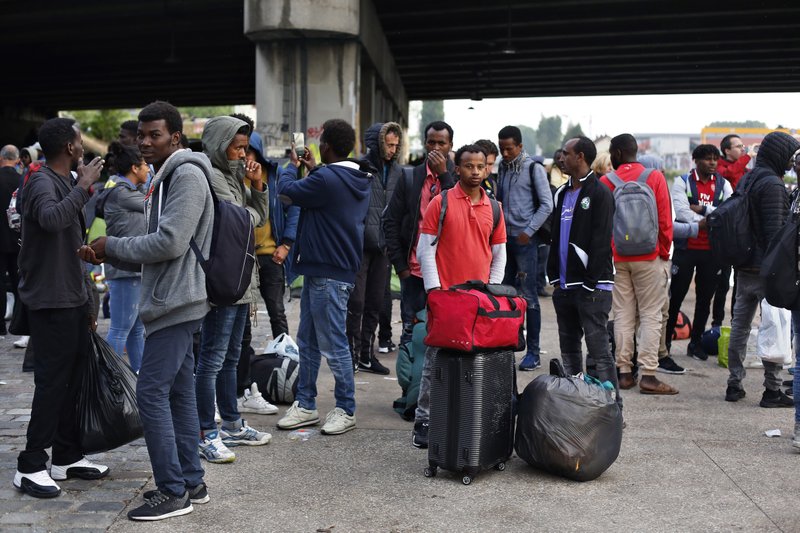 Migrants line up in a makeshift camp during its evacuation, in Paris, Wednesday, May 30, 2018. Authorities moved in early Wednesday to the so-called Millennaire tent camp on the city’s edge alongside a canal used by joggers and cyclists. It is the largest of several around Paris. Two migrants drowned this month in canals along the encampments. (AP Photo/Thibault Camus)

The camps have been at the heart of a political debate between French Interior Minister Gerard Collomb and Paris Mayor Anne Hidalgo over how to handle migrants. The mayor and dozens of associations pressed for the migrants to be sheltered once dislodged from their encampments, as in the past. The minister dragged his feet.

Hidalgo, who has paid weekly visits to the encampment, said she felt good that the migrants were being taken to shelters, but “I think we could have done without the four-month wait.”

“This is an issue of dignity,” said Pierre Henry, head of an aid group, France Terre D’Asile. “Street camps should not exist in our country.”