Immigration is now seen as the most important issue facing the European Union (EU) by people in every member state apart from seven countries, where the top concern is terrorism, an official survey has found.

The revelation comes from the Eurobarometer, a series of public opinion surveys conducted for the European Commission, the bloc’s executive branch, and corroborates the results of a YouGov survey from May.

As recently as 2014, immigration and terror were perceived as less of a concern for the bloc than the economic situation, member states’ public finances, and unemployment.

When people were asked this year what “are the two most import issues facing the EU at the moment,” 38 percent said immigration was the most important issue in 21 member states.

Furthermore, immigration was named as the second most important concern in all the remaining member states except for Portugal.

The second most named issue was terrorism, with 29 percent mentioning it, putting it in the first position in seven countries. 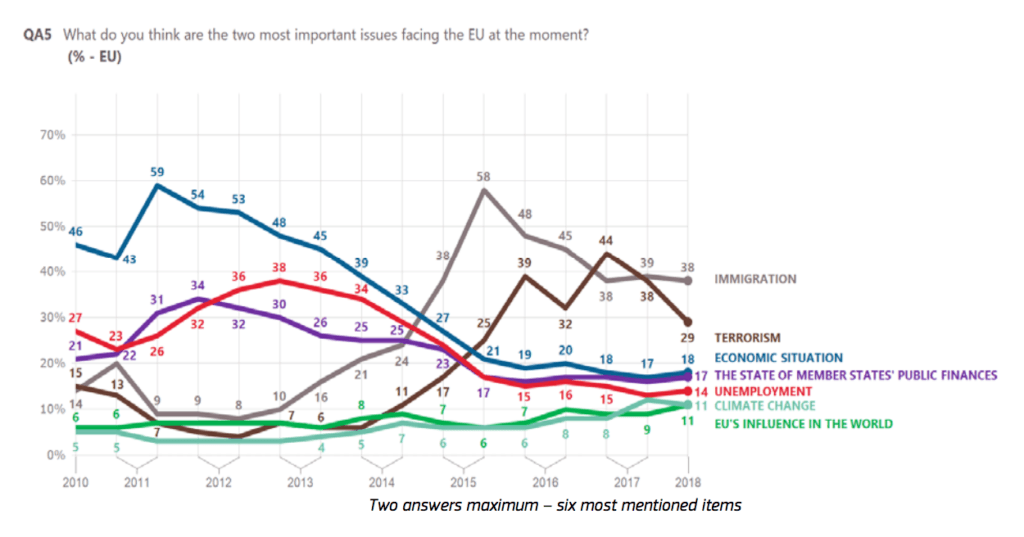 However, terror was also very widely cited in the second position in the Czech Republic (47 percent), Bulgaria and Poland (both 42 percent), and Latvia (41 percent). Overall, it emerged as the second most important issue in 15 member states.

The economic situation came in the third position overall and was mentioned commonly in Greece (30 percent), Cyprus (26 percent), and Spain (25 percent).

At a national level, the two most important issues for people’s home countries were seen as unemployment and health and social security, with immigration falling to the third most cited issue.

In May, a YouGov poll found the top two issues facing the EU according to people in Britain, Denmark, France, Germany, Greece, Sweden, Finland, Poland, and Lithuania was immigration and terrorism.

The only nation where another issue occupied one of the top two spots was Italy, where they were they were immigration and unemployment.