Sea-Watch announced the detention of their vessel, the Sea-Watch 3, on Sunday through a statement on their website which claimed the ship had been detained without reason and called the move “a political campaign to stop civil rescue at sea”.

Sea-Watch 3 Captain Pia Klemp argued that the ship was registered to fly under the Dutch flag, which other vessels were accused of illegally flying by the Italian government.

“Our ship has a proper registration and is fully entitled to fly the Dutch flag. We would be the best equipped and trained rescue crew in the area of operation and there is no legal ground provided so far to justify the detention of our vessel. We expect the authorities to let us sail immediately,” Klemp said.

On Monday, Maltese courts heard testimony in the case of the captain of the Lifeline NGO vessel, operated by Mission Lifeline, who was charged for failing to have correct registration paperwork.

According to investigators, Captain Claus-Peter Reisch is in possession of a ship master’s ticket but it only allows him to command and oversee vessels which do not go more than 30 nautical miles off any given coastline. 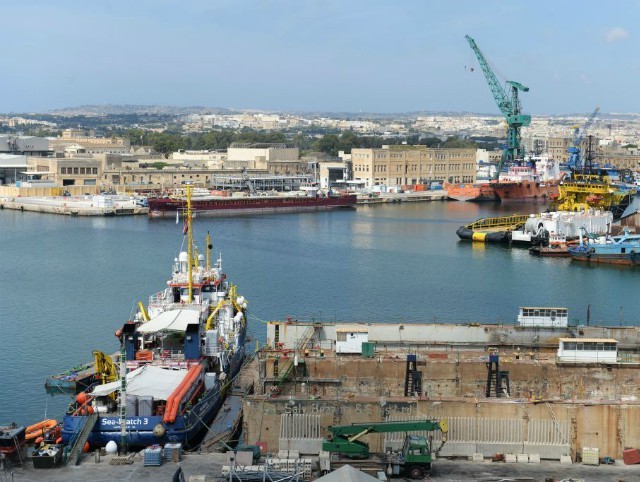 The Dutch search and rescue vessel Sea Watch 3 (L), lies berthed in a dock in the harbour of Marsa in Malta, undergoing repairs on June 24, 2018. (Photo by Matthew Mirabelli/AFP/Getty)

Police Inspector Mario Haber added that the NGO ship was registered at a Dutch yacht club although the Netherlands has claimed the ship is not registered with them.

These incidents mark the latest setback for the migrant transport NGOs following their ban from all Italian ports last month at the order of populist Italian Interior Minister Matteo Salvini.

The closure of Italian ports led the migrant transport NGO ship the Aquarius, operated by SOS Méditerranée and Doctors Without Borders (MSF), to travel to Spain instead where it unloaded over 600 migrants picked up off the coast of Libya.