Around two-thirds of Brits do not think a second Brexit referendum, or so-called “People’s Vote”, is likely.

Support for a re-run of the 2016 referendum is only marginally higher among ‘Remain’ voters compared with ‘Leave’ voters, the YouGov poll published Tuesday also revealed.

It found that just under a quarter – 24 percent – of people think a second referendum on whether to stay inside or exit the European Union (EU) is likely.

In contrast, 63 of respondents felt the second vote is unlikely, despite pro-EU campaigners claiming support is strong.

Leave voters are even less inclined to think a second membership referendum is going to happen. Just 14 percent of this group said such a vote is likely compared to 75 percent who do not.

Younger Britons are the most expectant that there will be a second referendum, despite the fact the result of the first vote has not even been implemented. 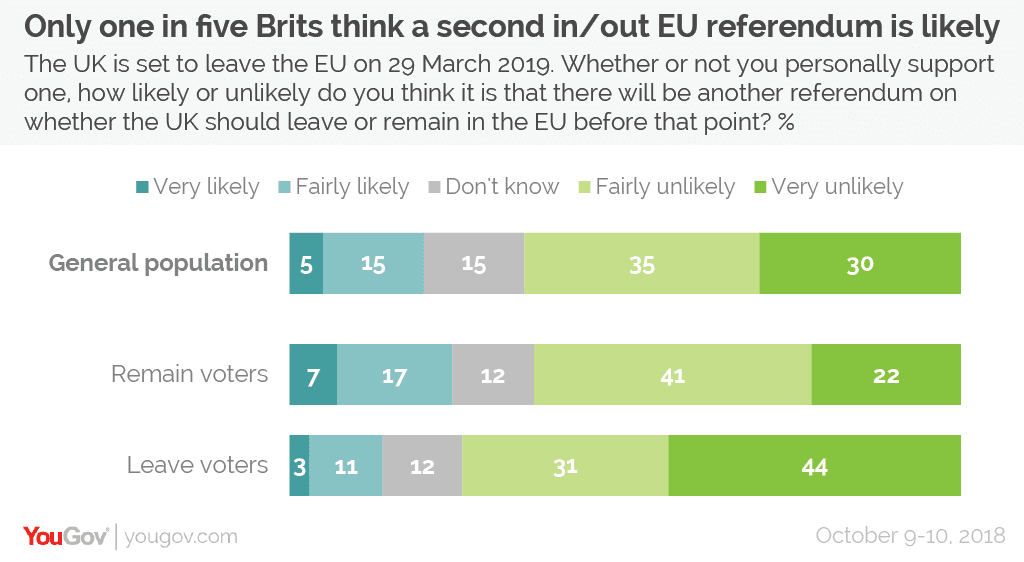 Close to a third – 31 percent – of those aged between 18 and 24 years old think it is likely that there will be another public vote.

In contrast, as with all other social groups, the majority – 54 percent – do not anticipate a second referendum.

Over the weekend, protesters demanding a second referendum gathered in London for a “People’s Vote march”, with supporters claiming it attracted approximately 700,000 people.

The march was held at the same time as a pro-Brexit rally in Harrogate, organised by the group Leave Means Leave and led by former UKIP leader Nigel Farage.

Mr Farage said: “The evidence suggests about a third of those that voted remain now say we’re democrats and think the government should simply get on with it.

“And that’s our message – get on with it, fulfil your promises to us, you said if we voted to leave it would happen, it needs to.”