The father of 11-year-old Stockholm terror victim Ebba Åkerlund has claimed that, on multiple occasions, what he identified as an illegal immigrant has vandalised the gravesite of his deceased daughter.

Stefan Åkerlund made the claims on his Facebook account Sunday saying that the illegal migrant, who he said has been ordered to leave Sweden, has been attacking other graves in the cemetery for over a year.

“Since late March, he’s damaged Isabell’s tomb at Ebba’s cemetery so badly that her mother had to replace the headstone. About six weeks ago, Olof Palme’s headstone was totally destroyed by [candle wax] that won’t come off. Ebba’s tomb has been desecrated over 30 times,” he wrote. 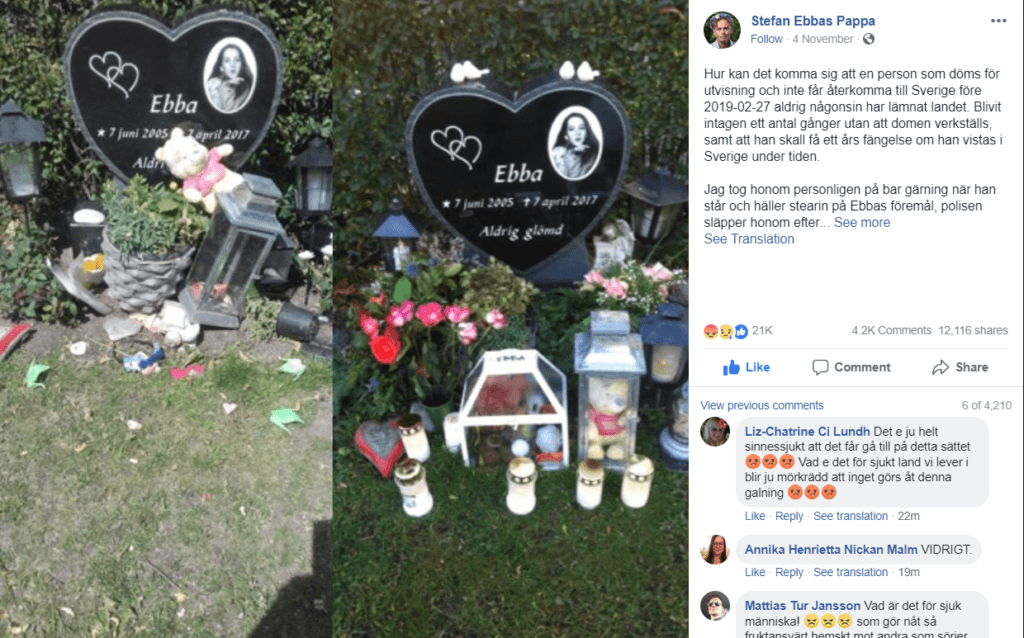 Åkerlund even claimed that he had witnessed the man vandalising his daughter’s grave, saying, “I personally caught him in the act of desecration, when he was pouring [candle wax] on Ebba’s grave; the police released him after only one hour in custody,” and added, “That’s what my nightly visits to the graveyard were worth.”

The migrant, who was not identified, is alleged by Mr Åkerlund to have been given a prior deportation order and is supposed to be banned from the country until 2019 but still remains in Sweden.

“How can a person condemned to expulsion and barred from Sweden until 2019-02-27 have never even left the country in the first place?” he said.

“What happened to the wonderful Sweden that I once grew up in?” Åkerlund wrote, and slammed the government saying that his daughter had to pay the price as “law & order does not work in this country.”

The comments come after Mr Åkerlund demanded an investigation into Sweden’s immigration rules to explain why Islamic State supporting terrorist Rakhmat Akilov had not been deported before he could commit the 2017 Stockholm terrorist attack that killed his daughter and four others.

“The fact that the Migration Board and the police did not do their job and deport a person who was here illegally, resulted in my daughter losing her life which forever destroyed my own life,” Åkerlund said.

His demands for an investigation came just as a European Union report leaked that showed Sweden to have the worst border controls in the entire political bloc. According to the head of the border police Patrik Engström, the noted problems could take up to five years to fix.