Annunziata Rees-Mogg joined Nigel Farage on stage on Friday to confirm she would be standing as Brexit Party candidate in the European Parliament elections to help “rescue our democracy” and return the power of Government to the people.

Ms Rees-Mogg, a journalist and former Tory Party candidate, told the audience in Coventry that she had left the Conservative Party in response to Prime Minister Theresa May ignoring not just her party membership but the 17.4 million people who voted to leave the EU by continuing to delay Brexit to avoid a no deal.

“I can’t sit by and let her do it. It is our fight and we must fight to win,” 40-year-old married mother of one said.

“The politicians need to listen to what the people have said,” Ms Rees-Mogg added, continuing, “We’ve got to rescue our democracy, we’ve got to show that people have a say in how this country is run.

“Politicians are not our masters; they are to do our bidding and we must fight back not only of control of the European Union but fight back for control of our own democracy. The stakes are that high.”

The younger sister of Tory Brexiteer and European Research Group (ERG) chairman Jacob Rees-Mogg, she is the daughter of former Times editor William Rees-Mogg and ran for MP for the Conservative Party in 2005 and 2010.

Ms Rees-Mogg is a long-time Eurosceptic, having campaigned against the UK joining the euro currency and founded  Trust the People in 2003 which sought a referendum on the European Constitution.

ERG Jacob Rees-Mogg chairman told MailOnline of the announcement, “‘The Brexit Party is fortunate to have such a high calibre candidate but I am sorry that Annunziata has left the Conservative Party.” 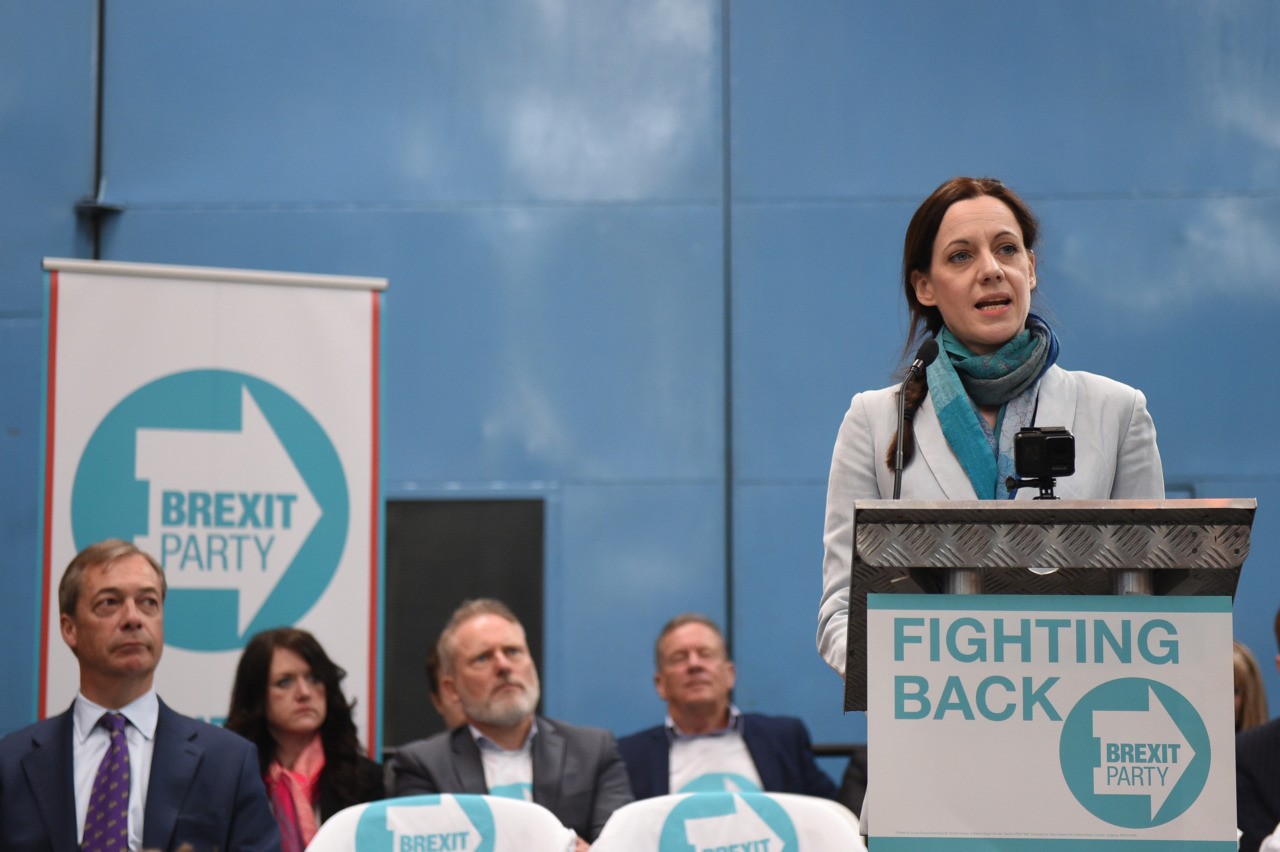 British journalist Annunziata Rees-Mogg (R) speaks as British politician and The Brexit Party leader, Nigel Farage (L) looks on at the launch of The Brexit Party’s European Parliament election campaign in Coventry, central England on April 12, 2019. – UK nationalist Nigel Farage launched his Brexit Party’s campaign for the European Parliament elections — a vote Britain was never meant to take part in that is being seen as a referendum on its stalled drive out of the EU. (Photo by OLI SCARFF/AFP/Getty Images)

Mr Rees-Mogg said of his sister in the summer of 2018, “Annunciata is my Brexit conscience who ensures I do not go soft. As I cannot even persuade her to spell her name correctly the chance of brainwashing her is slim.”

The issue of the younger Rees-Mogg’s name made headlines in 2011 when the Daily Mail reported that ahead of the 2010 general election then-Tory Party leader David Cameron asked Annunziata Rees-Mogg to change her name to the less-posh ‘Nancy Mogg’ to supposedly improve her chance of winning.

The Telegraph reports Ms Rees-Mogg said, “Well, I think it’s phoney to pretend to be someone you’re not. I was christened Annunziata.”

Brother Jacob later said the request was made in jest.

“She has been treated disgracefully. We think she’s been rejected because she turned down Cameron’s request to change her name, or he can’t stomach her Eurosceptic views,” a source told the tabloid.

“And in the age of coalition with the Lib Dems, they don’t want a formidable candidate such as Annunziata having another crack at unseating David Heath, who is now a Minister,” they added.

The Brexiteer will stand as MEP candidate in the May 23rd to 26th European Parliament elections. Mr Farage registered The Brexit Party in February in anticipation of Mrs May betraying Brexit by extending Article 50 so far beyond the agreed leaving date of March 29th that the UK would be forced to take part in the EU-wide elections.

BREXIT PARTY LAUNCH LIVE– Farage: A Brexit Party win in Euro Election will put 'the fear of God' into those in Britain's Parliament who betrayed Brexit https://t.co/OpNSp7493H