The man who threw a milkshake at Nigel Farage during an election campaign walkabout in May has been spared a custodial sentence but has been ordered to pay £520 and perform 150 hours of unpaid work.

Paul Crowther, 32, threw a milkshake at Brexit Party leader Nigel Farage in Newcastle upon Tyne in May, one of a series of similar assaults against right-wing politicians and activists during the European Parliament election campaign in the United Kingdom. Images from the scene showed Crowther smiling as he was arrested, and he told journalists present that he believed throwing things at politicians should be considered a legitimate form of protest. 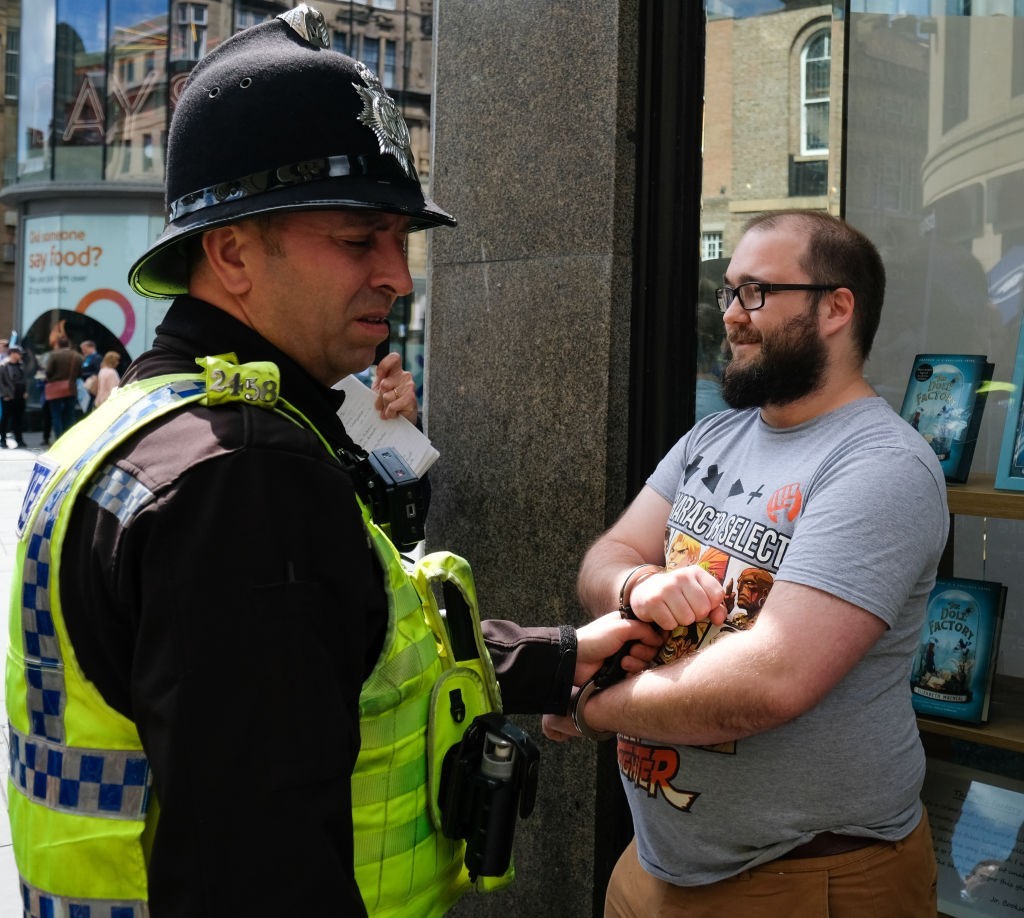 NEWCASTLE-UPON-TYNE, ENGLAND – MAY 20: Paul Crowther (R) is pulled away by security and held by police after throwing what was thought to be milkshake over Brexit Party leader Nigel Farage in Northumberland Street in Newcastle Upon Tyne during a whistle stop UK tour on May 20, 2019 in Newcastle Upon Tyne, England. (Photo by Ian Forsyth/Getty Images)

Crowther appeared at North Tyneside Magistrates’ Court Tuesday and admitted to Common Assault, but was not jailed for the attack, instead being handed an order to perform 150 hours of unpaid work, which in the UK generally takes the form of volunteering in the community. He was also ordered to pay £350 to Mr Farage for damage to his suit of clothes and a lapel microphone he was wearing.

The court also ordered Crowther to pay an £85 victim surcharge — a contribution to a government-controlled pot of money used to compensate the victims of crime — and £85 in legal costs, the Daily Telegraph reported. Meanwhile, a crowdfunding page set up to support Crowther has raised the man over £1,700 in donations.

The case has been compared to the recent assault on Jeremy Corbyn by a member of the public, who struck the Labour leader with an egg. The perpetrator was sentenced to 28 days in jail.

The newspaper also reported the remarks of the prosecutor in the case, who pointed to the rising number of acid attacks taking place in the United Kingdom, and stated that in the first moments after the attack Mr Farage could not have known whether the liquid was harmless or something more sinister.

Crowther had been an employee of Sky Television, a UK broadcaster which controls one of the country’s two major 24-hour news stations, but subsequently lost his job after being filmed throwing a milkshake over an elected politician.

Less than a week after the common assault on Mr Farage, an elderly military veteran volunteering for the Brexit Party was also attacked with what was described as a milkshake.

The incident also inspired a series of claims from left-wing figures that rather than being covered in milkshake, Nigel Farage should have battery acid thrown at him instead. Police investigated one such set of comments, made on a radio comedy show by BBC personality Jo Brand, and in another case, a happiness charity employee left their post over the remarks.

Read more: James Delingpole on the mainstream left’s tacit endorsement of violence against the political right: