Brexit Party leader Nigel Farage has just been assaulted with a milkshake.

Burger King must be so proud!

The attack happened while Farage was in Newcastle Upon Tyne, as part of a whistlestop tour which is taking him to all corners of England for his final campaign push before Thursday’s European election.

Farage was unharmed, though his suit most definitely wasn’t. You can well understand why he was so very peeved – not least at the failure of his tight security to prevent what could have been an assault by something far worse than milkshake. 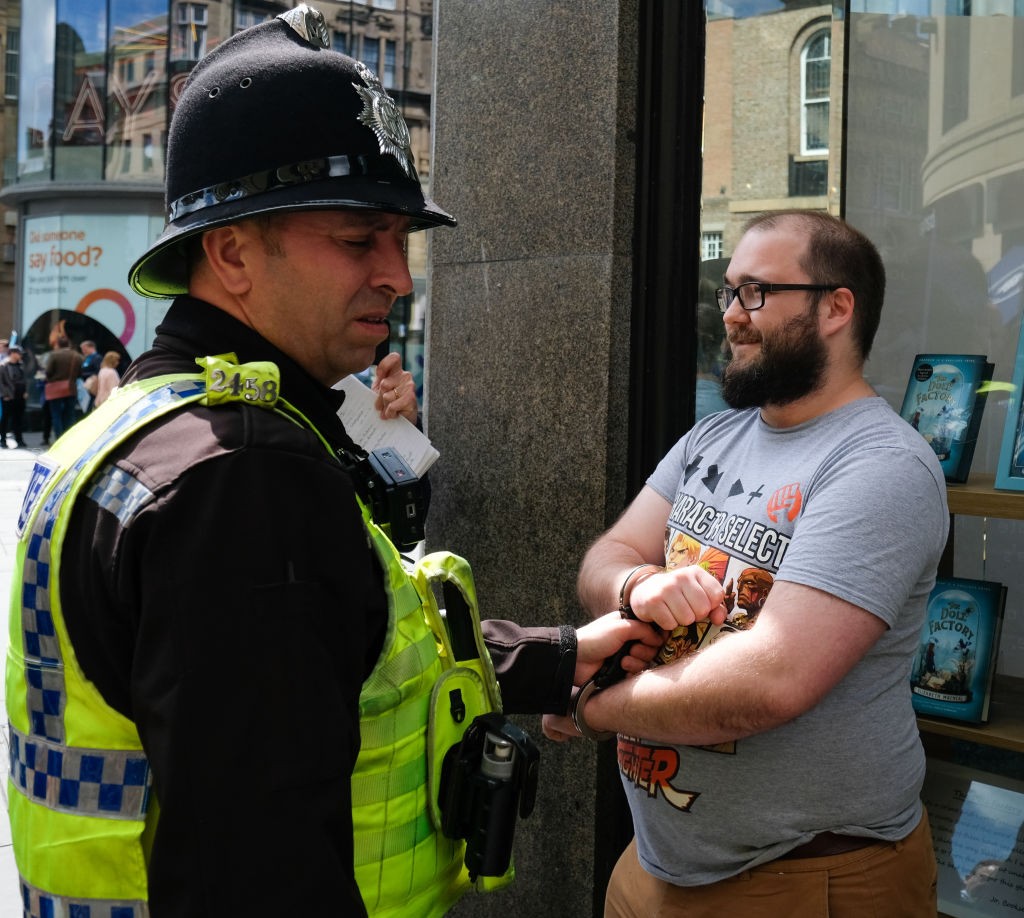 NEWCASTLE-UPON-TYNE, ENGLAND – MAY 20: Paul Crowther (R) is pulled away by security and held by police after throwing what was thought to be milkshake over Brexit Party leader Nigel Farage in Northumberland Street in Newcastle Upon Tyne during a whistle stop UK tour on May 20, 2019 in Newcastle Upon Tyne, England. (Photo by Ian Forsyth/Getty Images)

As I’ve argued before, there is nothing funny or clever about these milkshake attacks which so far have been directed solely at campaigners who believe in Brexit, never at campaigners agitating for Remain.

First victim was Tommy Robinson, campaigning as an Independent in the North West. He has been hit twice.

Another is UKIP campaigner Carl Benjamin who has been attacked with milkshakes four times this week alone. Note well the comedy music that the (violently pro-Remain, hard-left-leaning) Independent has appended to its video: just like Burger King, the Independent appears to think that violence against political candidates is hilarious. Hilarious, at least, when they are not on your side of the political argument.

One milkshake. One. Didn't even go on his head. And Farage gets upset, shouts at staff, is led away like a naughty schoolboy, and pisses off in a car. https://t.co/on8V9GnjhJ

So when some random assailant chucks a milkshake at you and it doesn’t hit your head, only your suit, you’re just supposed to laugh it off?

I wonder if Ian Dunt were capable of responding with such restraint and equanimity were he attacked in this way.

But what I find even more fascinating is the sheer tone deafness of all those Remainer-supporters — like Dunt, like the Independent, like Burger King — in their tacit endorsement of physical violence against Leave campaigners.

Can they really not see that in a properly functioning democracy, it is quite wrong to attack political campaigners in the streets regardless of how reprehensible you might find their views?

When Jeremy Corbyn was attacked earlier this year with an egg, his Brexit-supporting assailant was jailed for 28 days. And quite rightly too, in my view. I can’t stand Corbyn. But, I have no sympathy whatsoever for people committing unprovoked acts of physical violence. Especially I have no sympathy when those people are besmirching the name of a cause — Brexit — I strongly believe in.

What I simply do not understand is why people on the Remain side of the argument don’t feel similarly disgusted when their supporters behave in this way.

Farage thinks it’s because they are simply following the appalling example set by mainstream politicians. After the incident, he commented on his Facebook page:

Sadly some remainers have become radicalised, to the extent that normal campaigning is becoming impossible.

For a civilised democracy to work you need the losers consent, politicians not accepting the referendum result have led us to this.

I suspect it may be even simpler than that. Remainers have become so deranged by being losers on the wrong side of history that they’ve completely lost their moral compass.