Thousands of farmers shut down highways in a go-slow protest converging on the Dutch capital Monday, as they protested being victimised by a government trying to meet European Union emissions laws by cracking down on agriculture.

Protesters driving thousands of tractors and other pieces of farm machinery in enormous convoys heading to the Hague carried banners and signs reminding Dutch lawmakers of the importance of agriculture, including ‘#NoFarmersNoFood’. Hundreds of miles of highways were blocked by an estimated 3,000 tractors Wednesday morning.

The day of protest is the thirds of its kind and follows another at the start of October. At the time, Dutch media reported the protests were against a call by the government that herds of animals reared for food should be culled so the nation could meet its European Union-imposed nitrogen emission targets. 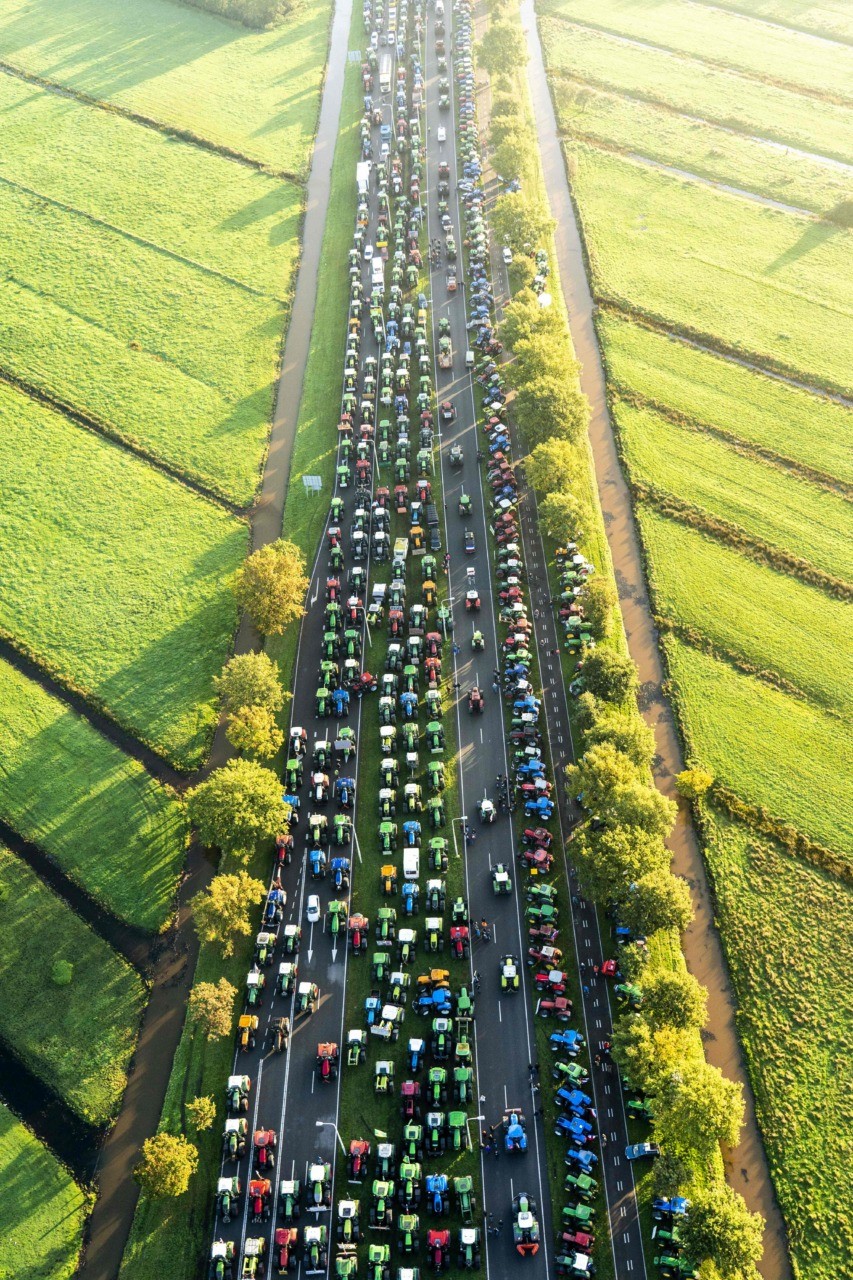 A picture taken on October 16, 2019 shows an aerial view of tractors blocking on a road in De Bilt during a farmers protest against the nitrogen policy rules. (Photo by Jerry Lampen / ANP / AFP) / Netherlands OUT (Photo by JERRY LAMPEN/ANP/AFP via Getty Images)

Farmers drove throughout the night to meet in the town of De Bilt, which contains the headquarters of the National Institute of Public Health, which the protesters claim has botched the nitrogen figures the government uses to dictate its environmental policy.

Having protested there, the convoys moved on to the Hague itself, the Dutch political capital.

The Dutch police and army, on the instructions of the centrist-globalist prime minister Mark Rutte, attempted to shut down the main roads leading into the capital Wednesday, but using the off-road capabilities afforded by driving a tractor, the protestors simply drove around the blockades, Dutch newspaper De Telegraaf reports. Rutte called on farmers to “keep the peace” and follow the instructions of police.

In addition to running the roadblocks, in some cases established with army trucks, the farmers have also defied orders to not drive their tractors onto the Malieveld, a large park in the centre of the Hague opposite the main railway station. 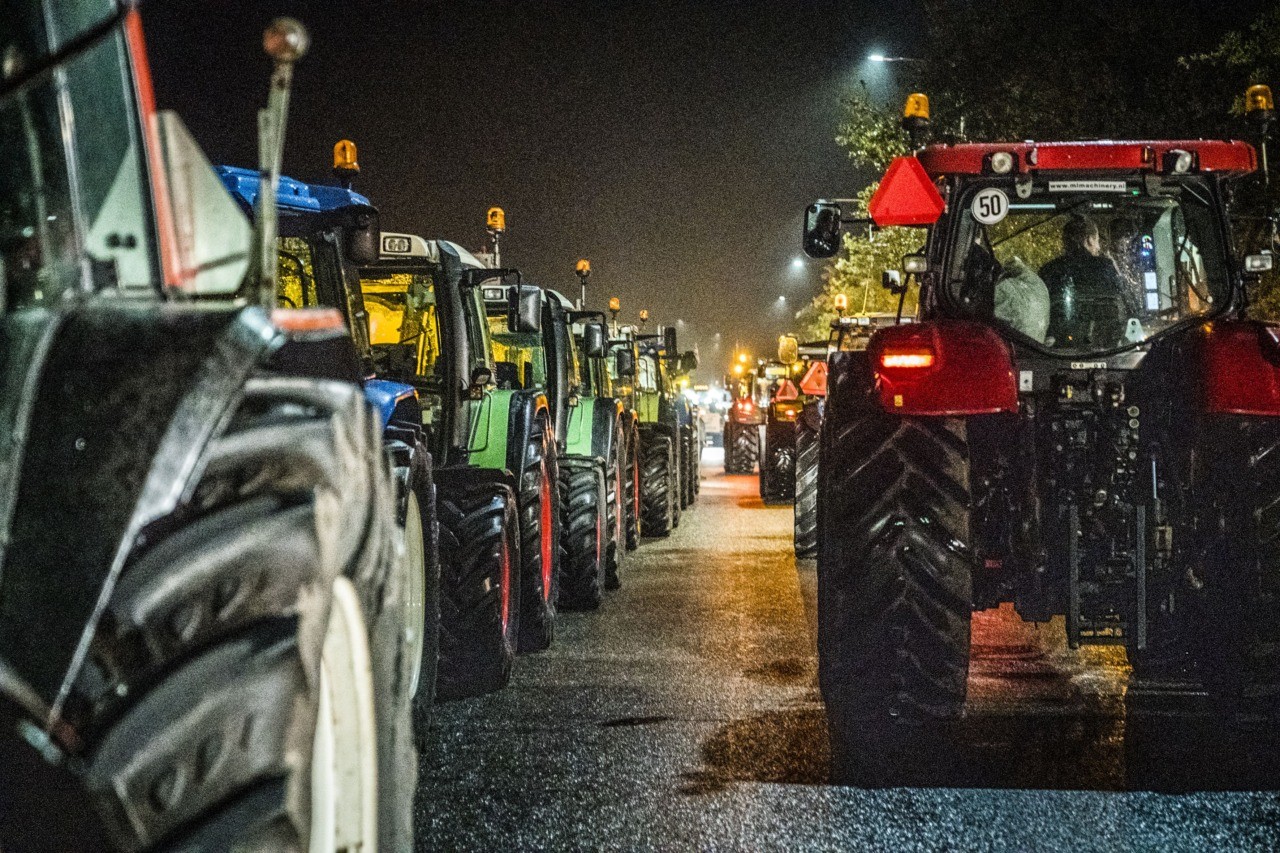 Farmers drive their tractor in Rogat, early on October 16, 2019 as they are on their way to a demonstration against the nitrogen policy rules, taking place at the National Institute for Health and Environment (Rijksinstituut voor Volksgezondheid en Milieu) in Bilthoven. (Photo by Siese VEENSTRA / ANP / AFP) / Netherlands OUT (Photo by SIESE VEENSTRA/ANP/AFP via Getty Images) 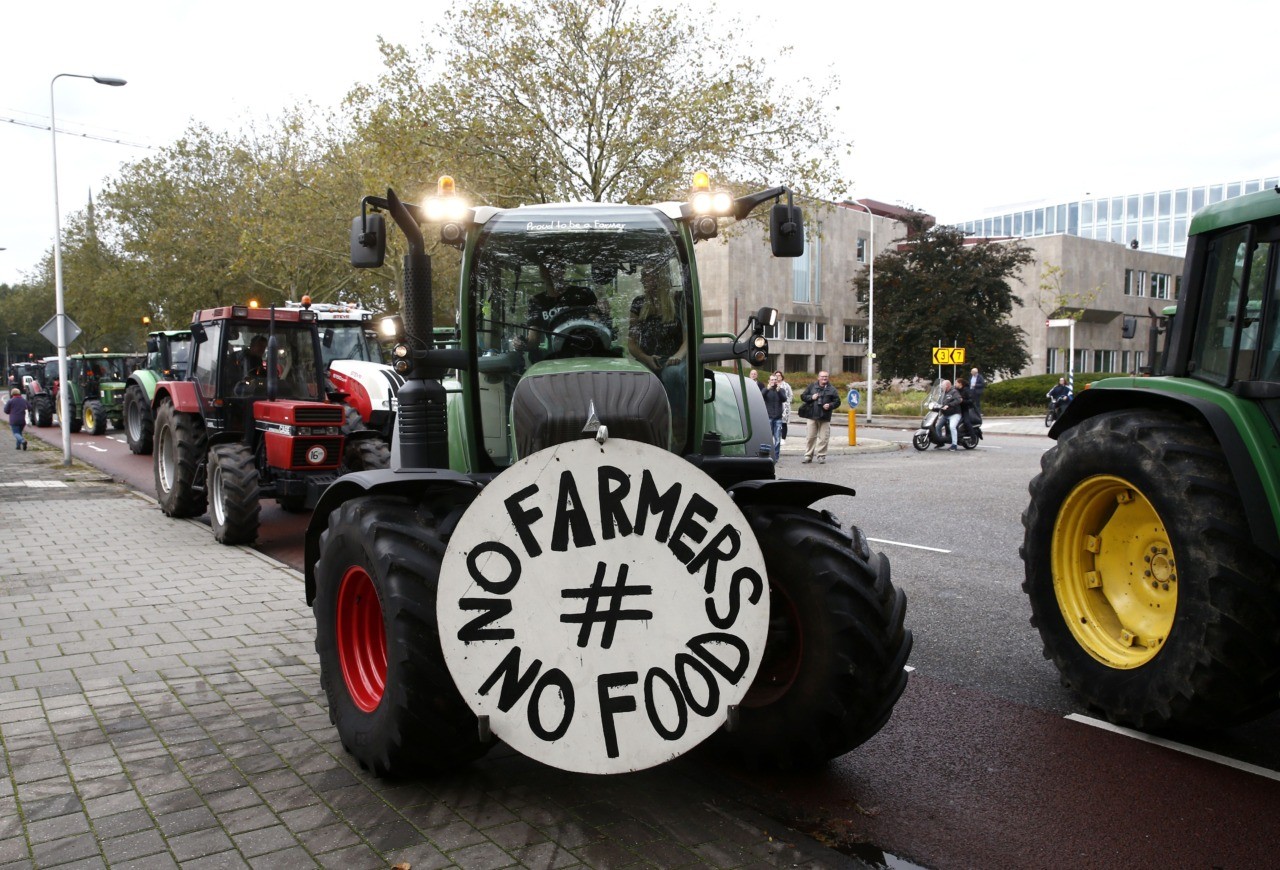 Dutch farmers protest with their tractors on their way to the the provincial government office of Overijssel in Zwolle, on October 14, 2019. – The representative of Agricultural and Horticultural Organisation (LTO) called for action and demanded a suspension of the nitrogen policy rules. (Photo by Vincent Jannink / ANP / AFP) / Netherlands OUT (Photo by VINCENT JANNINK/ANP/AFP via Getty Images) 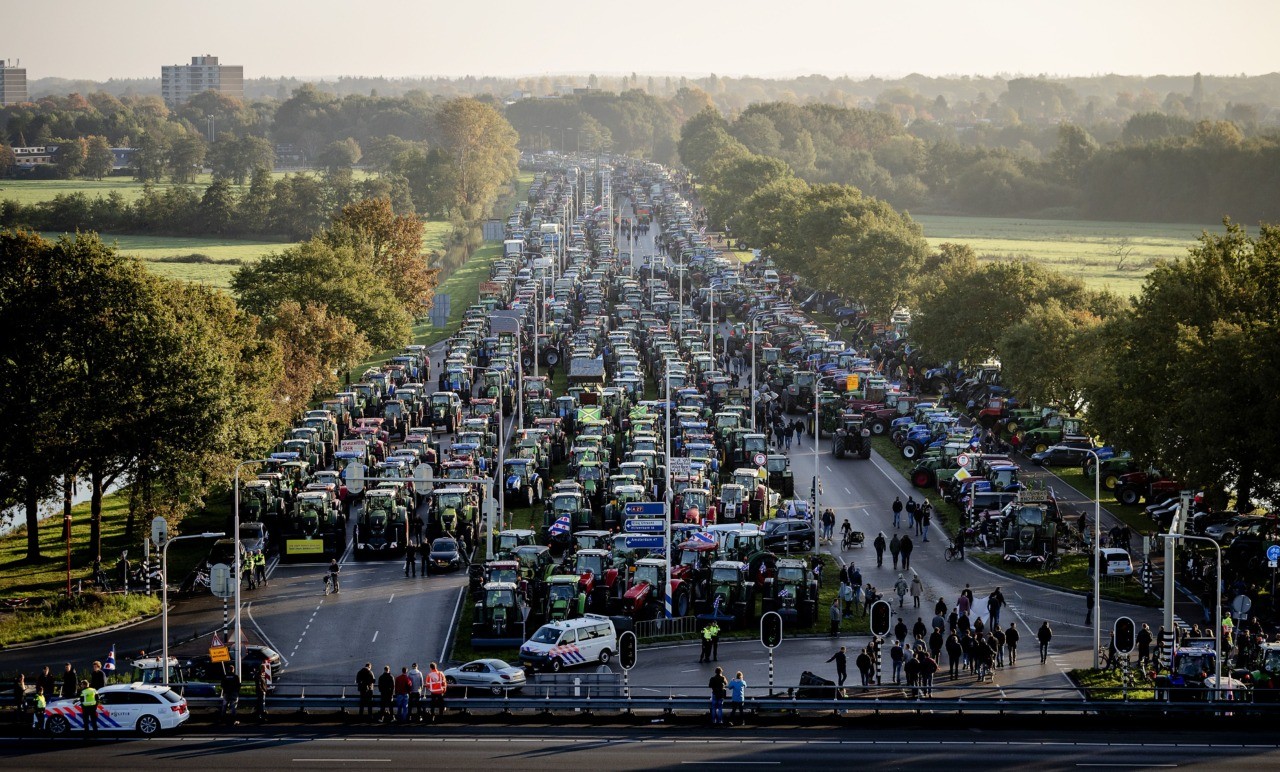 TOPSHOT – Farmers gather with their tractors near the headquarters of the the National Institute for Health and Environment (Rijksinstituut voor Volksgezondheid en Milieu), for a protest against the nitrogen policy rules, in Bilthoven, on October 16, 2019. (Photo by Robin van Lonkhuijsen / ANP / AFP) / Netherlands OUT (Photo by ROBIN VAN LONKHUIJSEN/ANP/AFP via Getty Images) 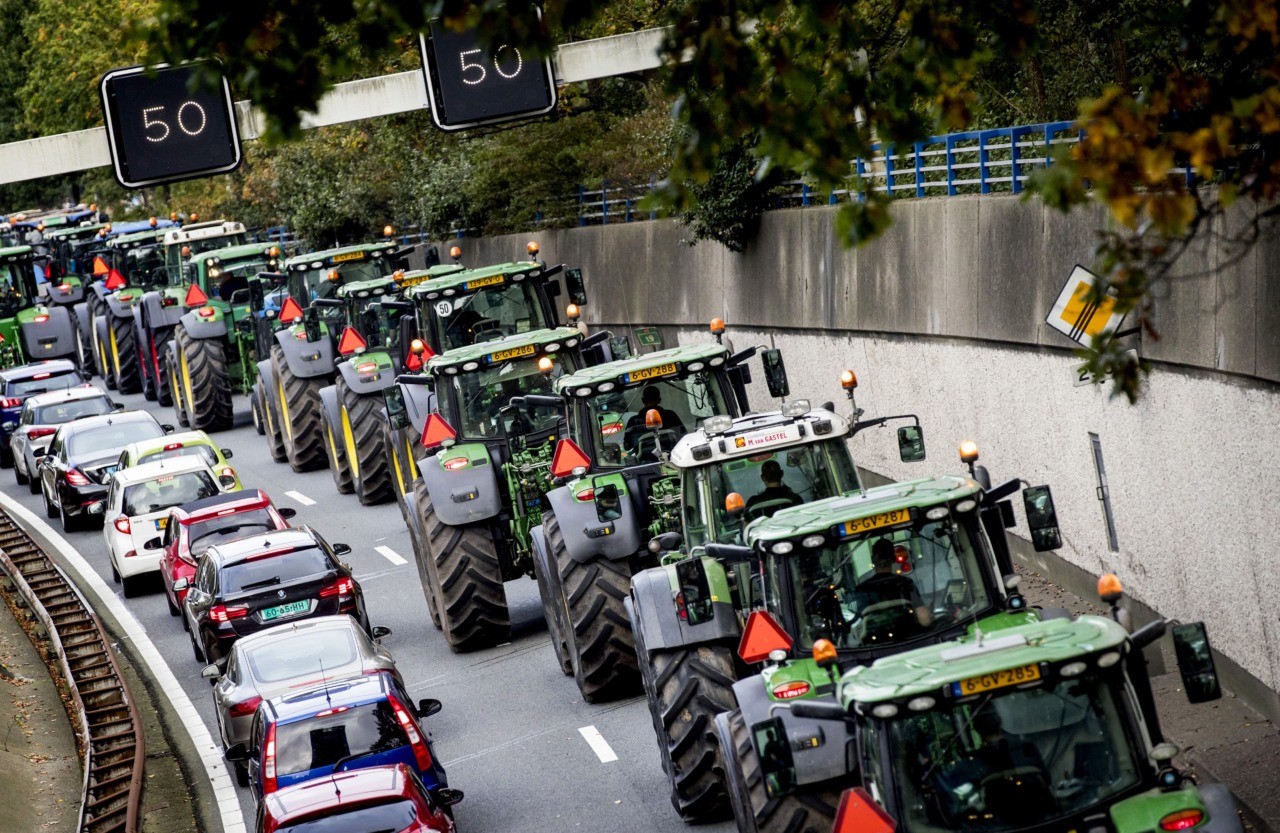 Farmers drive their tractors in a line in The Hague on October 16, 2019 during a protest against the nitrogen policy rules. (Photo by Koen van Weel / ANP / AFP) / Netherlands OUT (Photo by KOEN VAN WEEL/ANP/AFP via Getty Images)