A man has been arrested on suspicion of murder after the bodies of 39 people, apparently the victims of callous people smugglers, were discovered in the back of an EU-origin goods vehicle near London.

The truck and trailer were discovered in Grays, Essex, on the outskirts of London four days after it crossed to Great Britain from Ireland to the Welsh port of Holyhead in the West of the nation on Saturday. Police said they were working on identifying the victims, which they said were comprised of 38 adults and one teenager, and said there had been no survivors found.

A 25-year-old man has been arrested on suspicion of murder and remains in custody. The industrial estate where the lorry was discovered has been closed and surrounded by portable privacy barriers by police as investigations continue.

Speaking in Parliament Wednesday, Prime Minister Boris Johnson made nonspecific remarks about the case, expressing his distress at the deaths but without speculation over how the victims may have died and why they could have been in the back of a lorry. he said: “This is an unimaginable tragedy and truly heart-breaking. I know that the thoughts and prayers of all members will be with those who lost their lives and their loved ones. 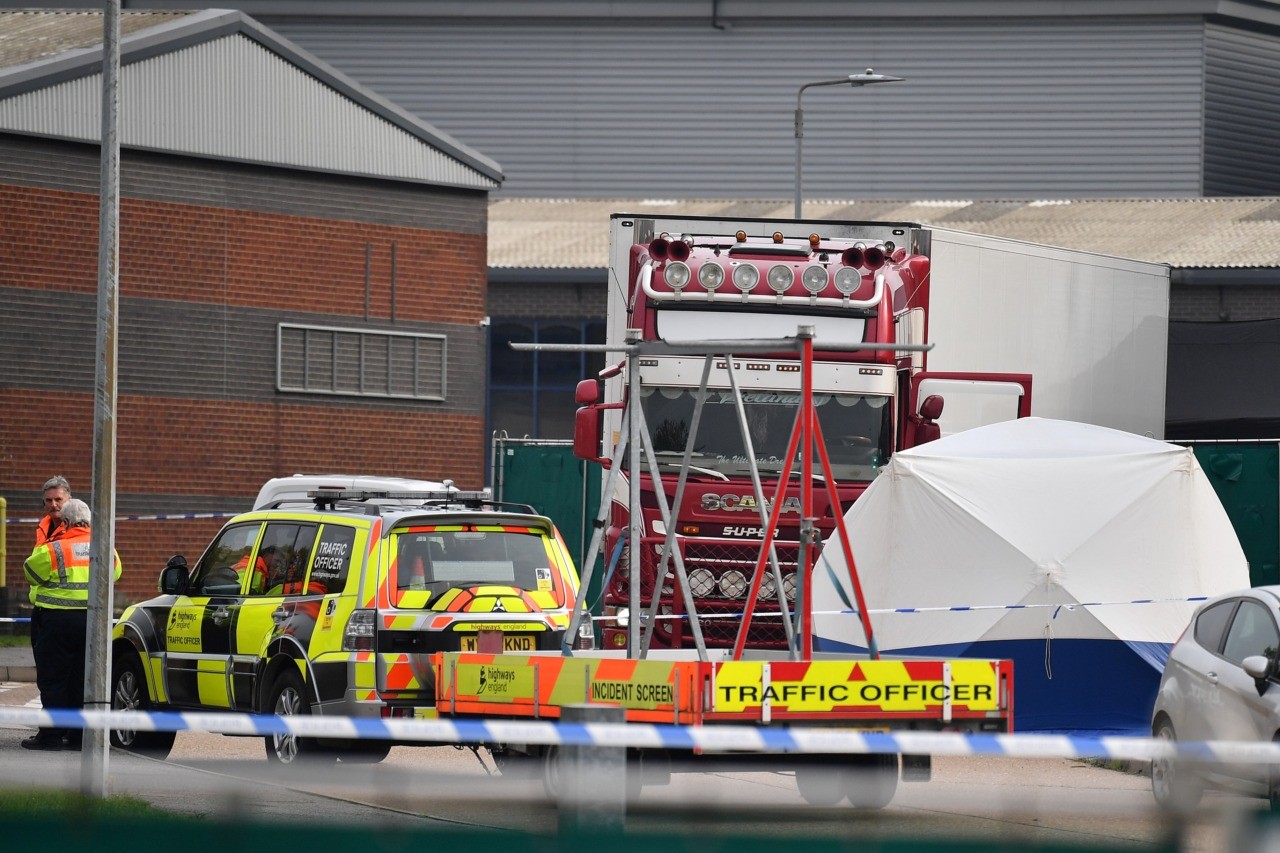 British Police officers stand on duty at a cordon near to where a lorry, believed to have originated from Bulgaria, and containing 39 dead bodies, was discovered at Waterglade Industrial Park in Grays, east of London, on October 23, 2019. – British police said 39 bodies were found near London Wednesday in the container of a truck thought to have come from Bulgaria. Essex Police said the people were all pronounced dead at the scene in an industrial park in Grays, east of London. Early indications suggest the victims are 38 adults and one teenager. A 25-year-old man from Northern Ireland has been arrested on suspicion of murder. (Photo by BEN STANSALL/AFP via Getty Images)

“The Home Office will work closely with Essex Police as we establish exactly what has happened and my right honourable friend the Home Secretary will be making an oral statement immediately after these questions.”

The Home Secretary Priti Patel, the government minister with responsibility for immigration and policing matters, is expected to make a statement later. It has not yet been confirmed that the victims were being smuggled by human traffickers, but UK news reports claim that is the working assumption of investigators as goods trucks have become a common — and frequently fatal — way to smuggle illegal migrants across Europe.

State broadcaster the BBC reports the lorry’s origin was European Union member state Bulgaria, meaning the trailer may have been able to cross Europe with a human cargo through several nations and made two sea crossings without being properly checked by border and customs officials. One of the key achievements of the European Union is the establishment of a totally borderless ‘Schengen’ zone, and reduced border checks with other European nations outside that scheme.

The Associated Press quotes the remarks of a freight industry insider who said the truck’s route to Great Britain from Europe through Ireland was “unorthodox”. Seamus Leheny, Northern Ireland policy manager for the Freight Transport Association, said it was the long way around, added a day to the journey, but was subject to less intensive security checks. 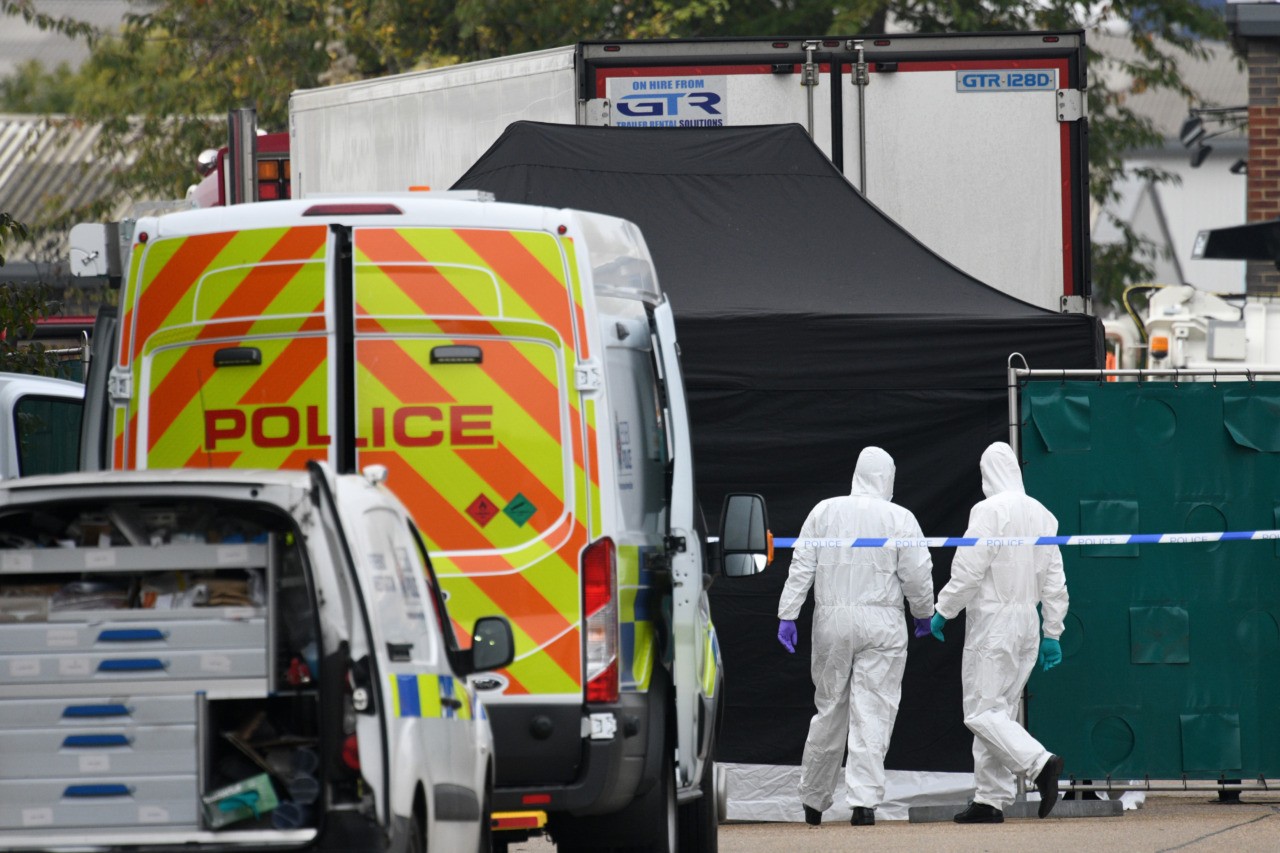 THURROCK, ENGLAND – OCTOBER 23: A Police forensic investigation team are parked near the site where 39 bodies were discovered in the back of a lorry on October 23, 2019 in Thurrock, England. The lorry was discovered early Wednesday morning in Waterglade Industrial Park on Eastern Avenue in the town of Grays. Authorities said they believed the lorry originated in Bulgaria and entered the country at Holyhead on October 19. The suspected driver was arrested in connection with the investigation. (Photo by Leon Neal/Getty Images)

He said: “People have been saying that security and checks have been increased at places like Dover and Calais, so it might be seen as an easier way to get in by going from Cherbourg or Roscoff, over to Rosslare, then up the road to Dublin.”

People smugglers are emerging as being among the most prolific killers in modern Europe, often receiving large sums of money to transport illegal migrants into and accross Europe secretly, and often with tragic consequences. A defining moment of the early stages of the Europe migrant crisis in 2015 was the discovery of 71 dead inside a truck in Austria that was transporting illegals accross Europe.

Among the victims were men, women, and children from Syria, Iraq, and Afghanistan. Sentencing a Bulgarian national and three Afghans who ran the fatal trafficking gang, a Hungarian judge said in his summary: “The suffering in that truck is beyond imagination, as is the utmost indifference the perpetrators showed towards the deaths of these 71 people. Therefore for those who played a core part, there is no doubt that the only punishment commensurate with their crime is the maximum one, which is life in jail without parole.”

The court had heard how the victims had hammered on the walls of the truck in desperation, but the Afghan gang leader had ordered the driver to not open the doors. They eventually abandoned the lorry on the side of a motorway, all passengers having died within two hours of setting off in the European summer heat, Reuters reported.

That incident recalled another in 2000 when 58 Chinese migrants were found dead in a truck trailer at the UK port of Dover. Dutch lorry driver Perry Wacker was ultimately sentenced to 14 years in prison for his part in the illegal migrant’s deaths. The court heard during the trial that the dead — and two survivors pulled alive from the back of the lorry– had paid smugglers £20,000 each to make it to Britain.

This story is developing: more follows 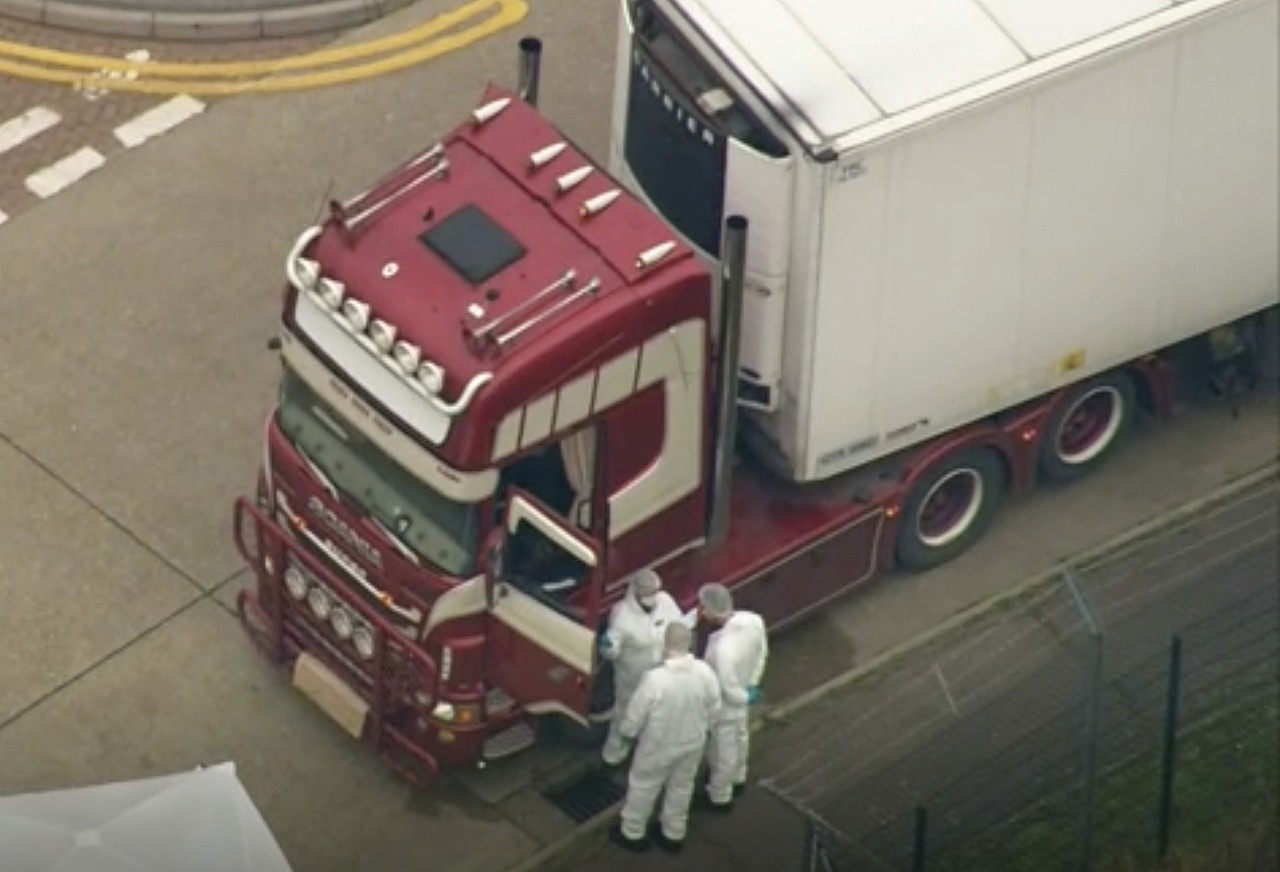 An aerial view as police forensic officers attend the scene after a truck was found to contain a large number of dead bodies, in Thurrock, South England, early Wednesday Oct. 23, 2019. Police in southeastern England said that 39 people were found dead Wednesday inside a truck container believed to have come from Bulgaria. (UK Pool via AP)