Brexit leader Nigel Farage has made defeating the unashamedly anti-Brexit Liberal Democrats and the promise-breaking Labour his primary election goal, announcing Monday he has stood down all candidates in seats won by the Conservatives so not to split the pro-Brexit vote.

The long-time pro-sovereignty campaigner told supporters in Hartlepool Monday afternoon that he had declared a so-called leave alliance “unilaterally” after Tory leader Boris Johnson had made some Brexit concessions overnight but had fallen short of offering a full electoral pact.

To prevent splitting the pro-Brexit vote, Mr Farage revealed he was standing down his candidates in the 317 seats won by the Conservatives in 2017, but would be focussing on fighting against remain parties in the rest of the country.

We are putting country before party. pic.twitter.com/O2MUynSqWH

Lamenting a decision he said had been “not easy” to make, Mr Farage reflected on the new remarks of the Prime Minister, and said: “I thought to myself overnight, well that sounds a lot more like the Brexit that we voted for. Trade, cooperation, reciprocity with our European Neighbours, is what we all want… what we don’t want is to be part of their political institutions.

“What the Prime Minister is saying, he will make sure we won’t be part of the political alignment and that is a significant step in the right direction.

“The Brexit party is not going to contest the 317 the Conservatives won at the last election. But what we will do is concentrate our total effort into all the seats that are held by the Labour Party, who have completely broken their manifesto pledge in 2017 to respect the referendum, and we will also take on the rest of the remainer parties.”

The announcement won Mr Farage instant praise from pro-Brexit groups, including Leave.EU who said the decision will help see Brexit delivered, but not all were happy.

A Brexit party source told Breitbart London Monday that candidates selected for seats that voted to leave the EU but which are represented by Remain-supporting Conservatives — of which there are over 100 — are not happy with the decision. Breitbart understands those candidates are asking why those anti-Brexit Tories should be allowed to “get away with it”. 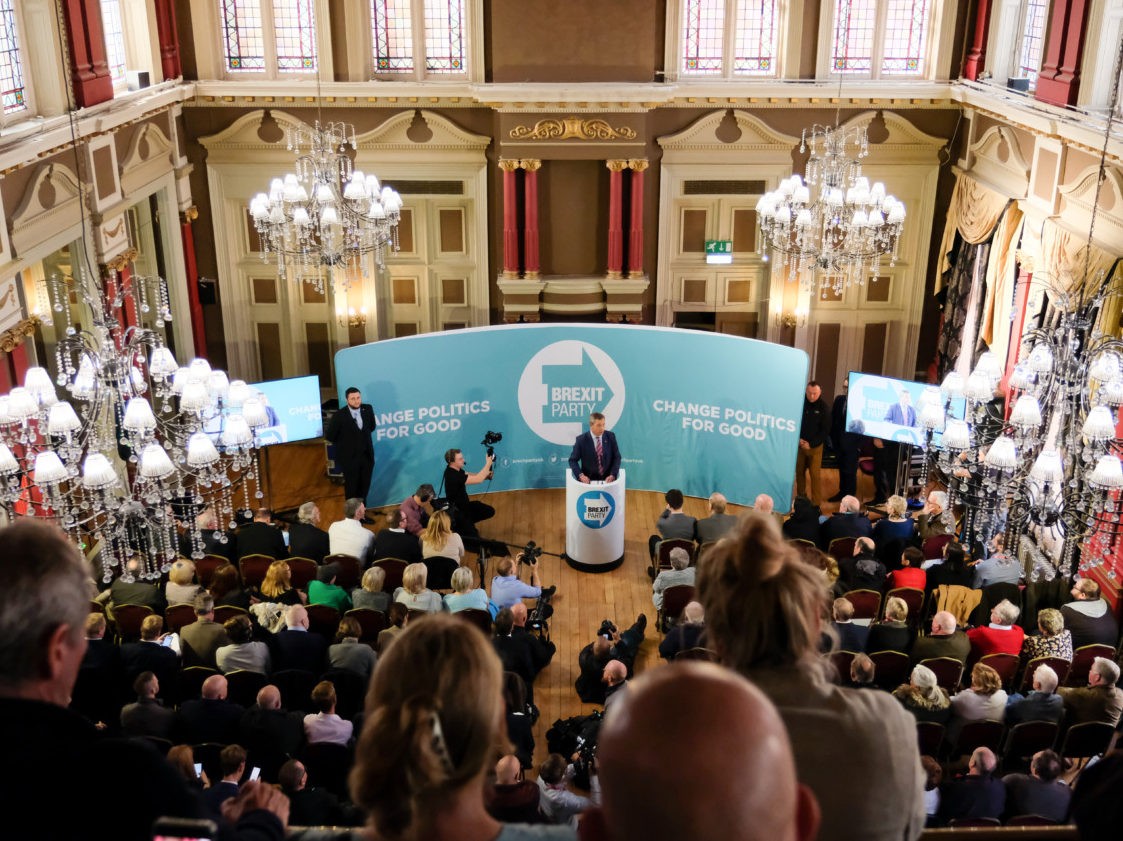 HARTLEPOOL, ENGLAND – NOVEMBER 11: Brexit Party leader Nigel Farage speaks during the Brexit Party general election campaign tour at the Best Western Grand Hotel on November 11, 2019 in Hartlepool, England. During his speech, Farage announced that his party will not stand in 317 seats won by the Conservative Party in 2017. Britain goes to the polls on December 12 to vote in a pre-Christmas general election. (Photo by Ian Forsyth/Getty Images)

Explaining his decision, Mr Farage said: “I have no great love for the Conservative Party at all, but I can see right now that by giving Boris half a chance, by keeping him honest and holding him to account, and by stopping the fanatics in the Liberal Democrats… our announcement prevents a second referendum from happening and that to me is the single most important thing in our country.”

Leaving the stage, the Brexit leader concluded: “So in a sense, we have a leave alliance, it is just that we’ve done it unilaterally. We’ve decided ourselves that we absolutely have to put country before party and take the fight to labour.”

The revelation of the party’s general election campaign strategy came hours after Prime Minister Boris Johnson made comments which were interpreted as an olive branch to the Brexit Party, when he ruled out extending the Brexit transition beyond 2020 and said he would pursue a Canada-style free trade deal with the European Union.

Speaking on a Twitter-published short video Sunday night, the Prime Minister said of what was to come in comments that were clearly welcomed by Brexit leader Nigel Farage: “I want to stress that that will be a straightforward free trade agreement with no political alignment.

The great new deal we've done with our European friends takes us out of the EU in January. Let’s build a new relationship based on free trade not political alignment. pic.twitter.com/I9KB6QxZK0