While Tony Blair’s former advisor may have garnered support from EU member states, Britain’s Conservative government will reportedly block Peter Mandelson’s bid to become the next leader of the World Trade Organization (WTO) over his anti-Brexit views.

Once dubbed The Prince of Darkness, the Labour peer Lord Mandelson is one of two British candidates in the running to become the chief of the global trade regulator, along with former British trade secretary for the Conservative government, Brexiteer Dr Liam Fox.

International Trade Secretary Liz Truss reportedly told Lord Mandelson on Monday that Boris Johnson’s government will not support him because he was “not a Brexiter”, according to the Financial Times.

Mr Mandelson claimed on Tuesday: “Nominating me would probably annoy some in Tory ranks who are more tribal Britain than global Britain, but I hoped my experience and credentials would outweigh political considerations.”

However, Mr Fox is also unlikely to be successful in his bid, according to the financial newspaper, because the Atlanticist lacks support from the globalist liberal European Union.

Downing Street said that “discussions were ongoing” whether Prime Minister Johnson would formally nominate Dr Fox on Wednesday, which is the deadline for nominations.

At the heart of the team to reform 1994’s traditional Labour Party into the centrist, globalist New Labour that swept to power in 1997 and stayed there for 13 years, Peter Mandelson earnt himself the nickname The Prince of Darkness for his reported ruthlessness and Machiavelian scheming.

A former Cabinet minister under both former Labour prime ministers Tony Blair and Gordon Brown, Mandelson reemerged on the British political scene in 2016 to oppose leaving the European Union, and for years after Britons voted to Leave, campaigned to have the democratic mandate overturned. 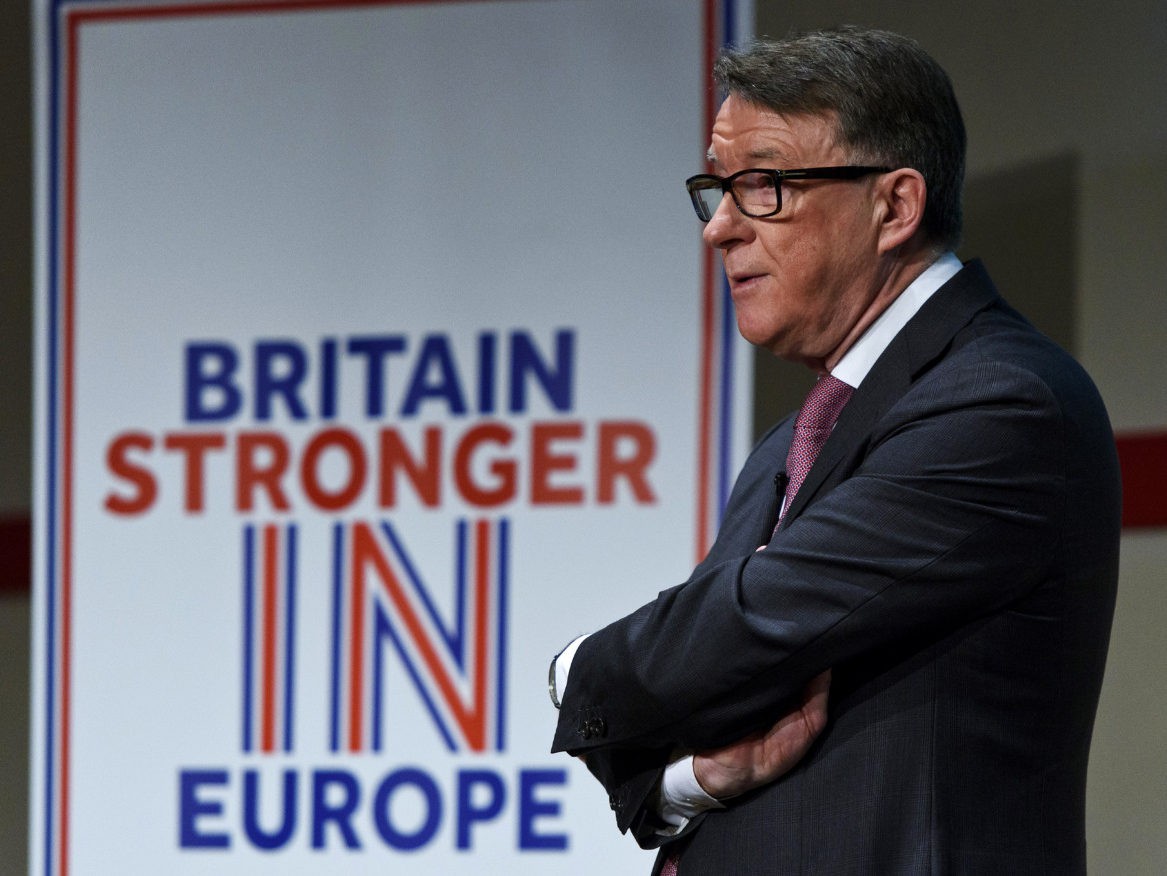 Mr Mandelson was associated with the Blair-backed Open Britain group’s 2017 campaign to unseat 20 Brexit-supporting MPs in the general election to stop what Lord Mandelson called a “hard Brexit” — otherwise, a proper Brexit, where the UK fully regained control of her laws and borders.

After the UK triggered Article 50 — the legal mechanism for leaving the European Union — in March 2017, Mandelson urged diehard Remainers to “resist”, “renew”, and “reorganise” in the battle against Brexit, saying: “We have vocally to oppose what we don’t agree with… That is why pro-refugee, anti-Trump demos, the Gina Miller case, new newspapers or campaigns against hard Brexit are so important.”

As recently as September 2019, reports circulated that he and Mr Blair were coordinating parliamentary attempts to stop Brexit, including a bill to stop the UK leaving the EU without a deal.

Mandelson became associated with the London Islington liberal elite, reportedly once mistaking mushy peas for guacamole at a chip shop in his own working-class northern constituency of Hartlepool, further adding to the impression that Mandelson was detached from the concerns of ordinary Britons.

According to a 2012 report by the left-wing Mirror, when asked about his fondness for having rich friends, Mr Mandelson, who was a member of the Young Communist League in his youth, said: “Do you know what I say to that? Good for me.”