The projections, which included cartoons of Mohammed, came as part of a French national tribute to teacher Samuel Paty which is taking place on Wednesday evening. Paty, a history teacher in the greater Paris area, was murdered on Friday by a Muslim immigrant terrorist because he showed the cartoons to his pupils as part of a lesson on freedom of expression.

Charlie Hebdo cartoons, including one of Mohammed, projected onto Montpellier government building. pic.twitter.com/pnhU0EXTsc

The images were projected onto two town halls in the Occitanie region — Montpellier and Toulouse — for four hours on Wednesday evening. Regional mayor Carole Delga was quoted by FranceBleu as saying of the decision to show the art: “there must be no weakness in the face of the enemies of democracy, facing those who transform religion into a weapon of war… those who intend to destroy the Republic.”

Cartoons of Mohammed, the Islamic prophet, have been used as justification by Islamist terrorists in several attacks, some deadly. The Offices of Charlie Hebdo were raided by Islamist gunmen in 2015, with many of the paper’s editorial staff killed. The court cases surrounding the killing finally being heard this year led to another attempted attack in September 2020, with a new would-be killer attempting to attack the now-vacated offices of the paper again.

The latest attack over the Charlie Hebdo cartoons took place last week when Samuel Paty was beheaded after showing the drawings in class. But the attacks pre-date Charlie Hebdo, with Danish newspaper Jyllands Posten the subject of several terror attack plots since it published an image of Mohammed wearing a bomb in his turban in 2005.

Friday’s attack has prompted a strong response from the French government, including police raiding individuals and organisations that expressed support for the attack and attacker in the immediate aftermath of the beheading, and even dissolving extremist Islamist organisations in the country that had previously been permitted to operate.

One mosque in France which shared to call to action which, it is believed, ultimately led to Patey’s murder issued an apology for its actions this week, insisting that it was not foreseeable that the call could lead to someone being killed. Despite the apology, the mosque has not escaped the attention of the French government, and will be shut down from next week. 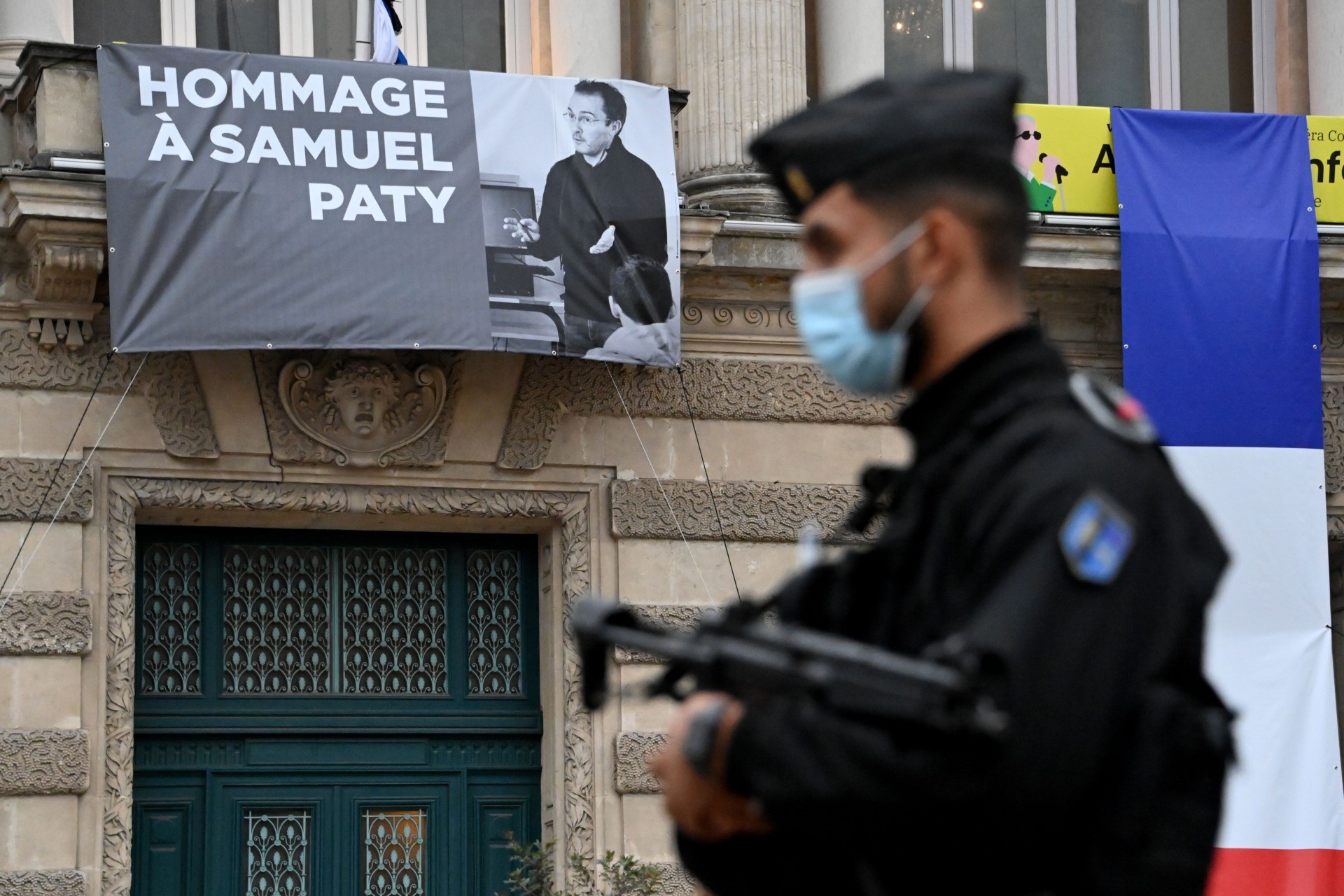 A French police officer stands next to a portrait of French teacher Samuel Paty on display on the facade of the Opera Comedie in Montpellier on October 21, 2020, during a national homage to the teacher who was beheaded for showing cartoons of the Prophet Mohamed in his civics class. – France pays tribute on October 21 to a history teacher beheaded for showing cartoons of the Prophet Mohamed in a lesson on free speech, an attack that has shocked the country and prompted a government crackdown on radical Islam. Seven people, including two schoolchildren, will appear before an anti-terror judge for a decision on criminal charges over the killing of 47-year-old history teacher Samuel Paty. (Photo by PASCAL GUYOT/AFP via Getty Images) 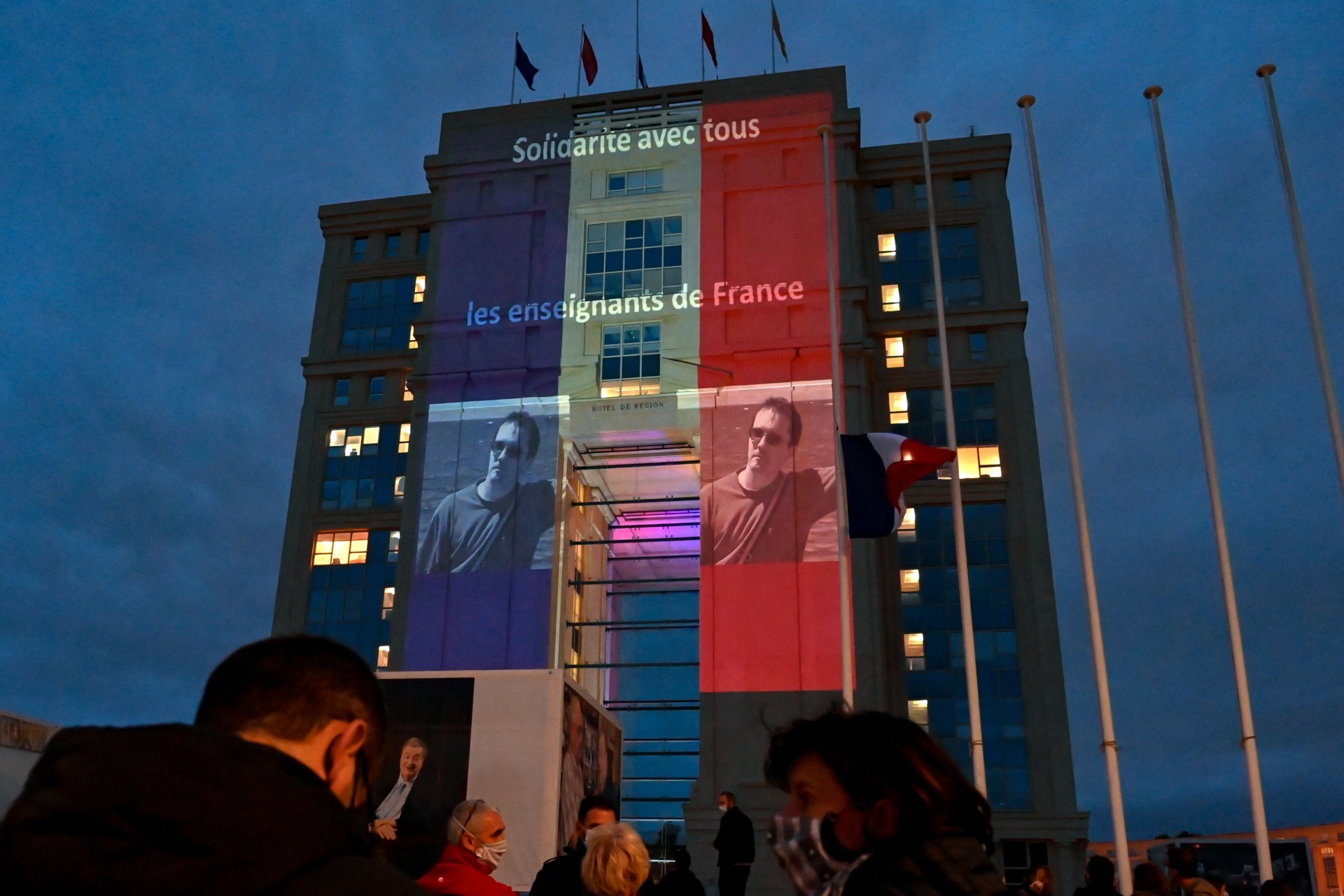 A portrait of French teacher Samuel Paty is projected along with cartoons of French satirical weekly newspaper Charlie Hebdo onto the facade of the Hotel de Region in Montpellier, on October 21, 2020, during a national homage to French teacher Samuel Paty who was beheaded for showing cartoons of the Prophet Mohamed in his civics class. (Photo by PASCAL GUYOT/AFP via Getty Images)