THE HAGUE, Netherlands (AP) – Dutch police said Wednesday that the fourth night of the Netherlands’ coronavirus curfew passed more peacefully than the previous three nights marred by rioting. Even so, officers arrested 131 people, mainly for public order offenses and incitement.

“It was calmer around the curfew on Tuesday night than the days before,” police said in a statement.

Underscoring the role of young people, who have been forced to stay home from school for weeks due to the country’s tough lockdown, police said that most suspects arrested for inciting riots through social media were under age 18. 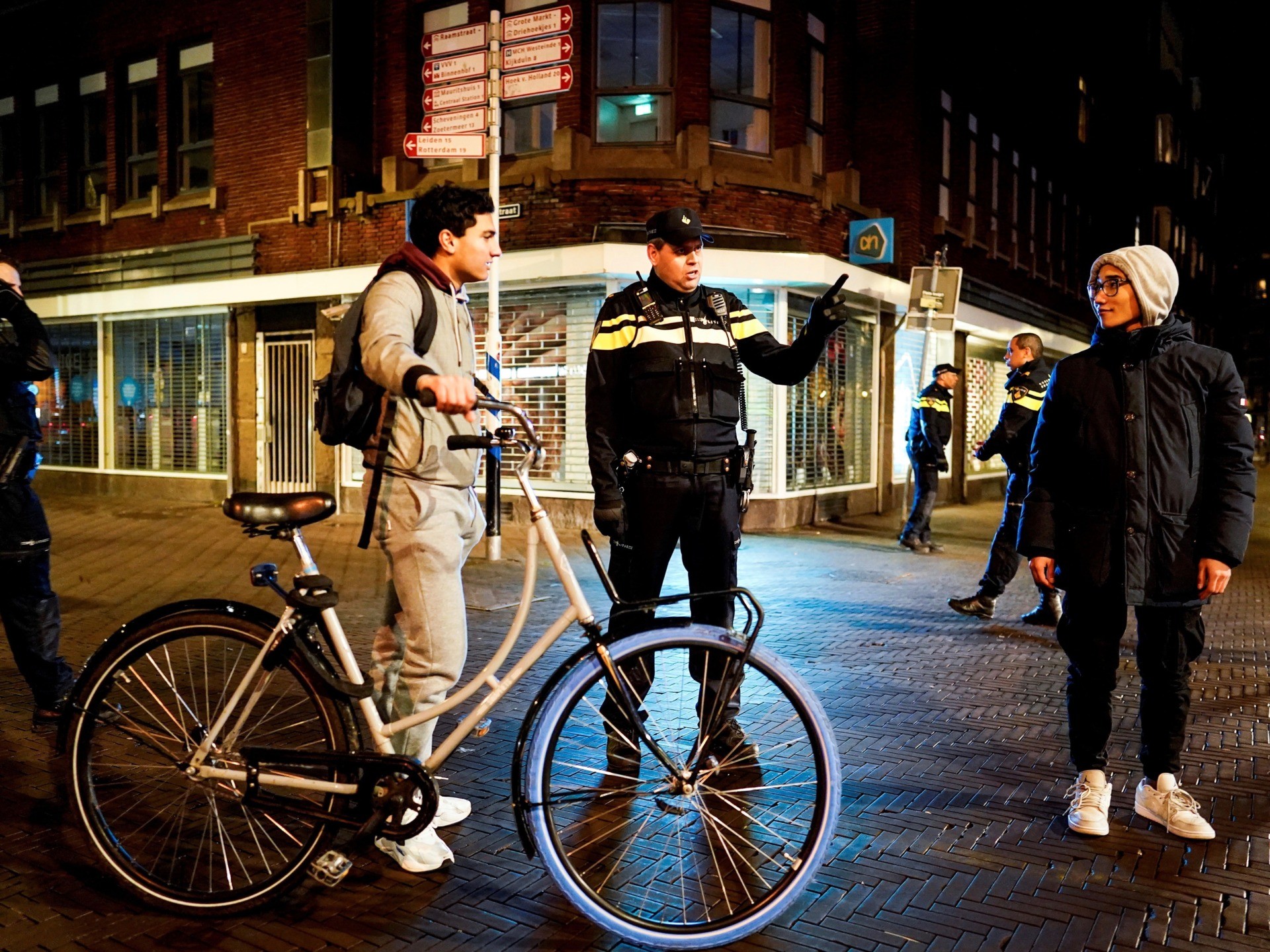 Police talk to people on a street in the Grote Marktstraat in The Hague, on January 26, 2021 a day after police clashed with groups of demonstrators protesting against the introduction of a coronavirus curfew over the weekend in The Netherlands. (Photo by STRINGER / ANP / AFP) / Netherlands OUT (Photo by STRINGER/ANP/AFP via Getty Images)

The rioting has rocked the Netherlands, which has a caretaker government after Prime Minister Mark Rutte’s ruling coalition resigned earlier this month over a scandal involving child welfare benefit fraud investigations. The pandemic is expected to be a key campaign issue before a general election scheduled for March 17.

Prosecutions of rioters began Wednesday, with a judge in The Hague sentencing a 19-year-old man to two months in prison for throwing a rock at a police van on Monday night.

Neighboring Belgium expressed fears Wednesday that the unrest could spread, with calls for protests against the country’s tough lockdown and its 9 p.m. curfew mounting on social media. The Dutch curfew, which began Saturday, also begins at 9 p.m.

Relative calm returned to cities in the Netherlands after three days of anti-lockdown riots, where roaming groups threw fireworks and rocks, and looted stores https://t.co/3qH5F0uvVK pic.twitter.com/Iq7dvYbLiM

“The violent demonstrations that degenerated in the Netherlands have apparently incited certain people to call, also in our country, for demonstrations against the health measures,” Belgian Interior Minister Annelies Verlinden´s office said.

Belgium, host of the headquarters for the 27-nation EU, has had one of Europe´s worst outbreaks. The nation of 11 million has seen over 20,800 confirmed virus deaths. The Dutch confirmed death toll is approaching 14,000.

The Dutch parliament debated the rioting Wednesday, with populist right-wing lawmaker Geert Wilders calling for the army to be used to reinforce police stretched by the widespread civil unrest, the worst to hit the Netherlands in years. 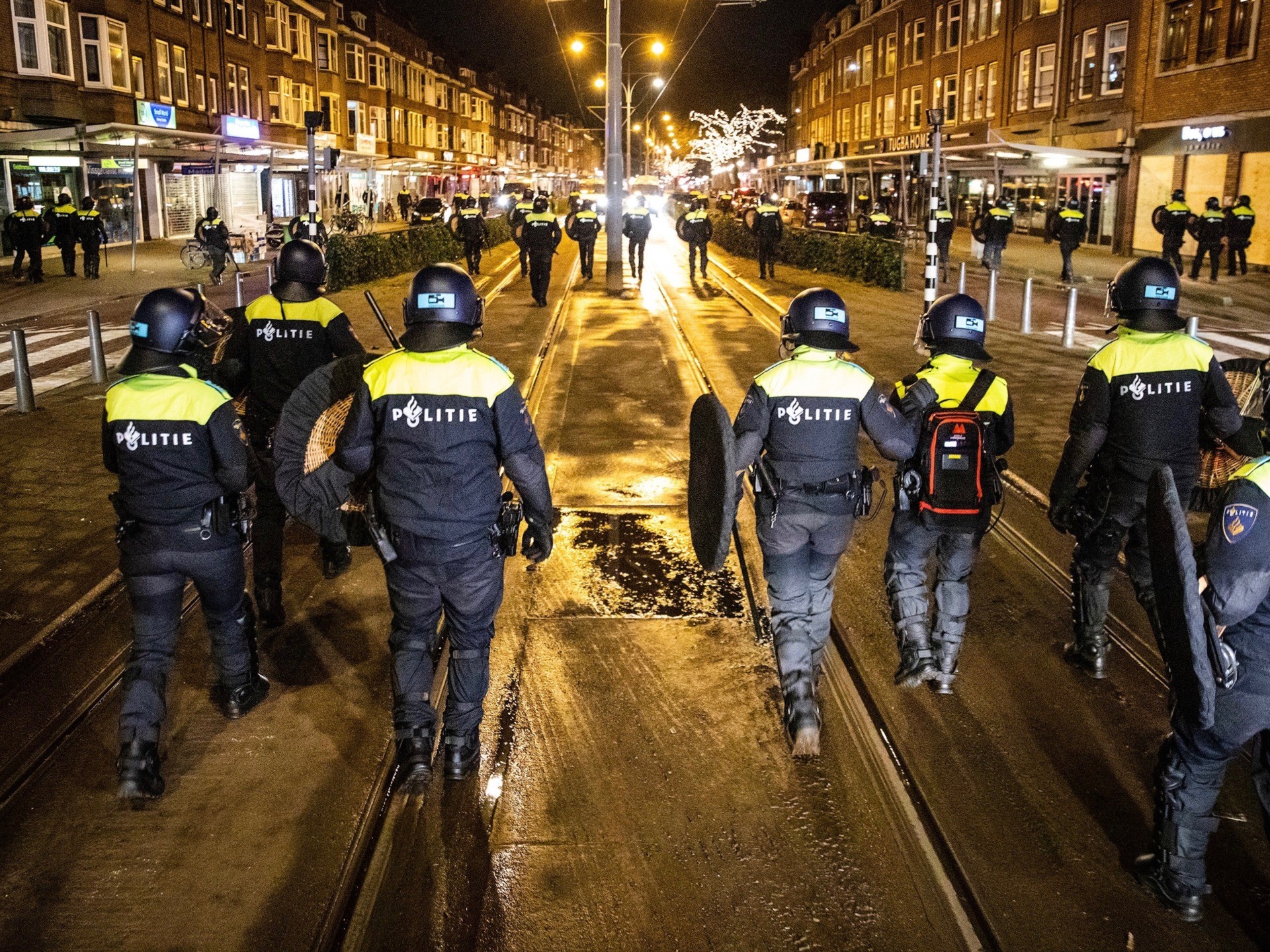 TOPSHOT – Dutch police officers patrol in the streets of Rotterdam, during the curfew time, on January 26, 2021, a day after police clashed with groups of demonstrators protesting against the introduction of new measures, including the curfew, to fight against the spread of the Covid-19. – In South Rotterdam and in the city center, several people were arrested for, among other things, gathering and not being able to show proof of identity. The police are massively present in the city after the riots of the day before and check people walking in groups on the street. (Photo by STR / ANP / AFP) / Netherlands OUT (Photo by STR/ANP/AFP via Getty Images)

Other lawmakers did not support Wilders’ call. Rutte and others praised the police response and condemned the rioters.

“I understand very well that many people in the Netherlands, myself included, find the corona measures tough,” the prime minister said. “I even understand that some do not agree with them, but that can never be a reason for this kind of behavior.”

Most of the arrests on Tuesday night happened in Rotterdam, one of the worst-hit cities on Monday, when rioters threw rocks, fireworks and Molotov cocktails at police and looted shops. There was no such violence Tuesday night, but police detained 81 people in the port city as they sought to quickly stamp out trouble.

In a number of Dutch cities, football fans took to the streets to maintain order. Police chief Willem Woelders said Tuesday night that fans were free to express their opinions, but stressed that law enforcement was a job for police.