A total of 42 far-left militants were arrested after storming the Greek cultural ministry in support of far-left convicted terrorist Dimitris Koufontinas in the latest acts against Greek officials.

The 42 far-left anarchist extremists were arrested after they attempted to occupy the Greek cultural ministry offices on Thursday at Karytsi Square in the centre of the Greek capital of Athens in support of Koufontinas.

According to a report from the Greek newspaper I Kathimerini, the militants arrested were also charged with violating the country’s Wuhan coronavirus restrictions along with disturbing the peace and were subjected to fines of 300 euros each.

A day after the arrests, the office of the Greek Sports Minister Lefteris Avgenakis on the island of Crete was also broken into and vandalised by suspects who have yet to be identified.

The office was, however, vandalised with slogans supporting terrorist Dimitris Koufontinas who is currently on a hunger strike, indicating the motive behind the incident. 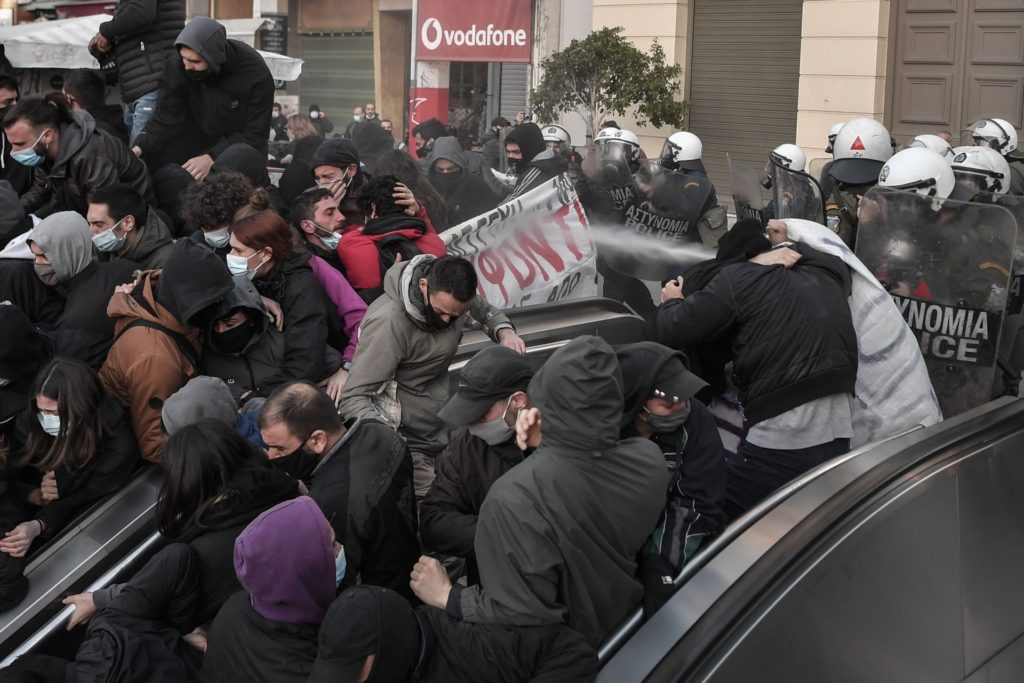 Riot police use tear gas on protesters at the edge of a subway station, during a demonstration in support of the convicted far-left hitman, Dimitris Koufodinas, in Athens on February 26, 2021. (Photo: LOUISA GOULIAMAKI/AFP via Getty Images)

Minister Avgenakis slammed those behind the attack, which he called “an act of political violence” on social media and stated, “The government will not be intimidated or blackmailed. It will remain steadfast in its defence of democracy and the rule of law.”

The two incidents are just the latest from far-left extremist militants over the course of the last several weeks in support of the former hitman of the notorious Revolutionary Organization 17 November (17N) who is believed to have been behind a large number of murders and assassinations from 1975 to 2000.

Earlier this week, anarchist militants attempted to occupy the Greek consulate in Berlin in support of the terrorist and targetted the home of Greek president Katerina Sakellaropoulou, throwing leaflets and flyers outside her residence in Athens.

While some of the protests have been relatively peaceful, others, like the firebombing of an office of the New Democracy party in the Athens suburb of Nea Filadelfeia, have been anything but.

Anarchist extremists took credit for the firebombing and stated, “For our part, we have a duty to support our partner by all means. If the demands are not met immediately, the attacks will be intensified both [in intensity and in frequency]. The pillars and crutches of urban democracy have material substance.”

Dimitris Koufontinas, who is currently serving eleven life sentences, has been on a hunger strike since January and has demanded he be moved away from the maximum-security prison where he is serving out his sentence.