AFP — Armed community members and vigilante groups have stepped in to tackle unrest in South Africa, taking matters into their own hands and sometimes stoking violence as security forces struggle to restore order.

Understaffed and heavily reliant on private security companies, the police was rapidly overwhelmed when riots and looting first flared last week in the southeastern province of KwaZulu-Natal (KZN), sparked by the jailing of graft-accused former president Jacob Zuma.

Thousands of soldiers were deployed to provide reinforcements as the violence spread to Johannesburg, the country’s financial hub.

But with tensions still high in parts of KZN and a toll of over 100, some worried citizens have taken up arms to protect their communities and their property.

Such grassroot mobilisations can easily turn violent and deadly in a country where it is not uncommon to own a handgun. 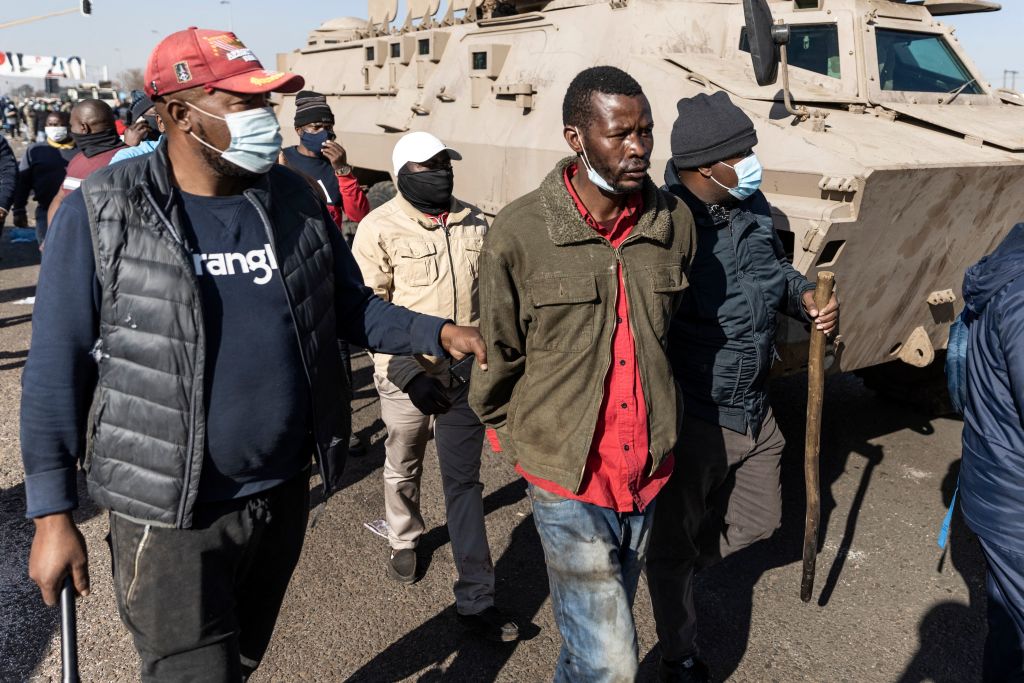 A suspected looter is arrested by a group of community vigilantes outside the Chris Hani Mall in Vosloorus, on the northern outskirts of Johannesburg, on July 14, 2021. – Stores and warehouses in South Africa were hit by looters on July 13, for a fifth day running despite the troops President Cyril Ramaphosa deployed to try to quell unrest that has claimed 72 lives. As pillaging erupted in the economic capital of Johannesburg and the southeastern province of KwaZulu-Natal, South Africa’s main opposition accused radicals of stoking the unrest. (Photo by GUILLEM SARTORIO / AFP) (Photo by GUILLEM SARTORIO/AFP via Getty Images)

AFP journalists witnessed one particularly brutal incident on Wednesday, when dozens of local commuter minibus operators beat up seven township dwellers caught rummaging through the debris of a ransacked mall in southeastern Johannesburg.

The victims, which included two women, crouched helplessly against a metal gate, wide-eyed and screaming in pain as the mob clamped down on them with whips, sticks and rusty metal rods.

One man who tried to escape was hit over the head with a glass bottle and dragged back, blood streaming down his neck.

Eager to show off their prowess, the group proudly paraded to police vans parked outside the mall’s main entrance.

There, they handed in their captives, whose faces were swollen and their hands were tied tightly behind their backs. Some were released on the spot.

Residents had meanwhile gathered in a nearby cemetery around the body of a teenage boy, allegedly shot earlier in the day.

Acting Minister in the Presidency Khumbudzo Ntshavheni on Thursday warned against “a situation where members of the public are at loggerheads with the law after their attempts to protect …their lives and their own lives”.

“Do not infringe on the rights of others and do not take the law into your own hands,” she said. 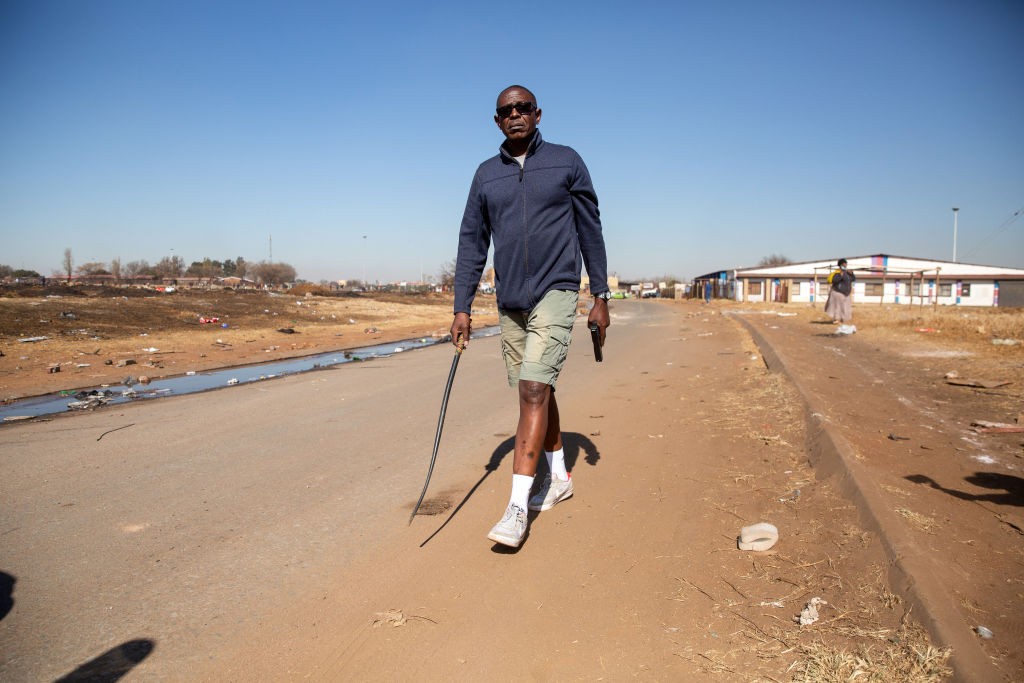 JOHANNESBURG, SOUTH AFRICA – 14 JULY: An armed vigilante during efforts to disperse looters on July 14, 2021 in Vosloorus, Johannesburg, South Africa. South Africa has deployed the military to quell spasms of civil unrest and looting sparked by last week’s imprisonment of former president Jacob Zuma, but also fueled by high unemployment and social and economic fallout from the Covid-19 pandemic, which has hit the country hard. (Photo by James Oatway/Getty Images)

“When you have so many unregulated security companies and arms floating around… who’s going to be in control when the country ignites?” he asked, noting that both the police and army were poorly equipped.

Deadly scuffles broke out over the weekend between armed locals and alleged looters in the town of Phoenix, 25 kilometres (15 miles) northwest of Durban, according to witnesses.

Police Minister Bheki Cele on Thursday said racial tension had fed into community protection efforts in Phoenix, where the majority of residents are of Indian descent.

Fifteen people are known to have been killed in the town since the violence started, he said.

This week Cele condemned “vigilantism” and urged citizens to work with police rather than set up parallel structures.

In Pietermaritzburg, KZN’s capital, local volunteers armed with anything from paintball guns to baseball bats are taking turns to watch over residential suburbs and shopping centres. 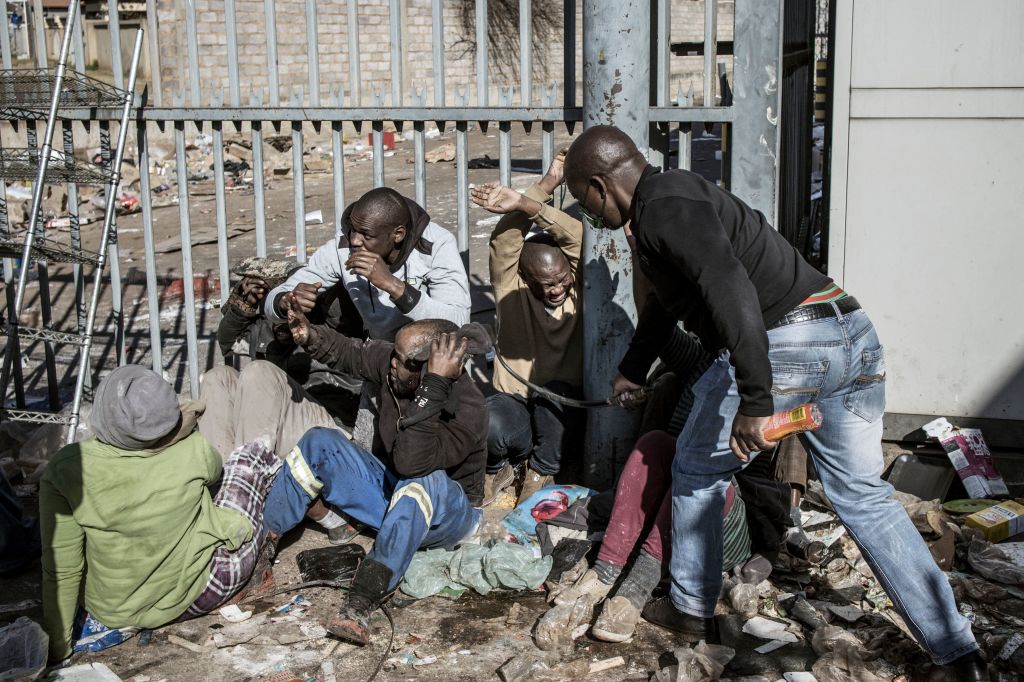 A group of suspected looters, are rounded up and beaten by a group of community vigilantes in Vosloorus, on July 14, 2021 as they are caught inside a vandalised shop. – Unrest raged in South Africa on July 14, 2021, for the sixth day running, stoking fears of food and fuel shortages as disruption to farming, manufacturing and oil refining began to bite. Seventy-two people have died and more than 1,200 people have been arrested, according to official figures, since former president Jacob Zuma began a 15-month jail term, sparking protests that swiftly turned violent. (Photo by MARCO LONGARI / AFP) (Photo by MARCO LONGARI/AFP via Getty Images)

“You will see a few [police] vehicles riding around but they are severely outnumbered,” said Naidoo, an investment advisor.

“It could definitely escalate into clashes,” he added. “That is exactly why the guys are arming themselves.”

“But in a country such as ours, where the state often fails to protect people and property, there is a vacuum,” said Burger, a consultant with the Pretoria-based Institute for Security Studies.

Informal policing is widespread in crime-laden South Africa, where most cannot afford the private security companies that protect high- and middle-income homes.

“You cannot dissociate the current unrest from South Africa’s very brutalised history and weaponised society,” said Tim Hughes, spokesman for the South African Self-Protection Alliance — lobbying against a proposed ban on the right to own firearms for personal safety.

The latest violence “deepens the sense of insecurity and almost forces people to turn to weapons,” he said. 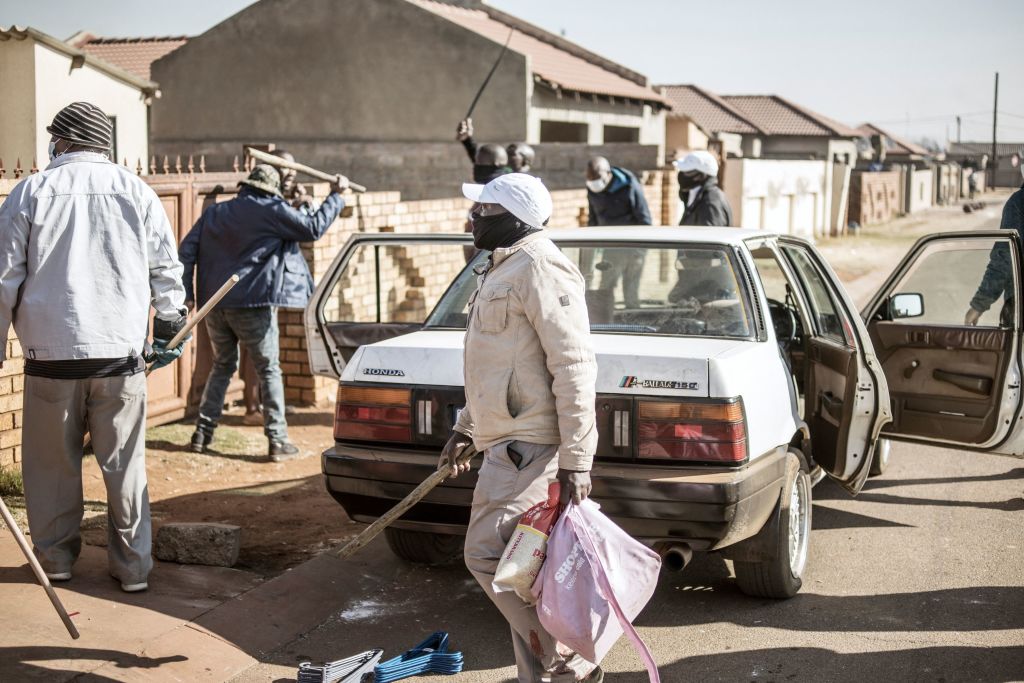 A man is beaten with whips and batons by a group of community vigilantes after a bag of allegedly stolen goods was recovered from his car in Vosloorus, on July 14, 2021, in the area outside a mall vandalised in the recent wave of violence. – Unrest raged in South Africa on July 14, 2021, for the sixth day running, stoking fears of food and fuel shortages as disruption to farming, manufacturing and oil refining began to bite. Seventy-two people have died and more than 1,200 people have been arrested, according to official figures, since former president Jacob Zuma began a 15-month jail term, sparking protests that swiftly turned violent. (Photo by MARCO LONGARI / AFP) (Photo by MARCO LONGARI/AFP via Getty Images)