ROME — Hungarian Prime Minister Viktor Orbán told public radio Friday that during Pope Francis’s visit to Budapest last Sunday, the pontiff urged him to continue his fight for the family.

“The Holy Father made it clear that the fight we are waging to protect families is the most important struggle with regard to the future of Europe,” Mr. Orbán declared, asserting that the pope had “reaffirmed” him in his efforts.

The prime minister noted that the pope is aware of the campaign to undermine the family in Europe and encouraged him to forcefully resist it.

Francis “sees that there are great forces at work, especially in Brussels,” Orbán said, “and he spoke as firmly as I have perhaps never been able to. He said that relativization of the family must not be allowed… and added ‘go ahead,’ do it, and do it we will.”

The prime minister also underscored that the pope had been “straight and tough” in saying that the traditional family cannot be relativized, insisting instead that families were formed by “mother, father and child; full stop.”

Hungary has stood out among European nations for its effective efforts to address the widespread demographic crisis, enacting pro-family policies that have countered the “demographic winter” that Pope Francis frequently denounces.

The Orbán government has introduced seven family-friendly government programs encouraging Hungarians to have children. It has also resisted attempts to import gender theory into the nation’s schools, insisting on the Christian understanding of humans as male and female. In this, it has mirrored the pope’s ongoing criticisms of “gender ideology,” which he has called “demonic”: 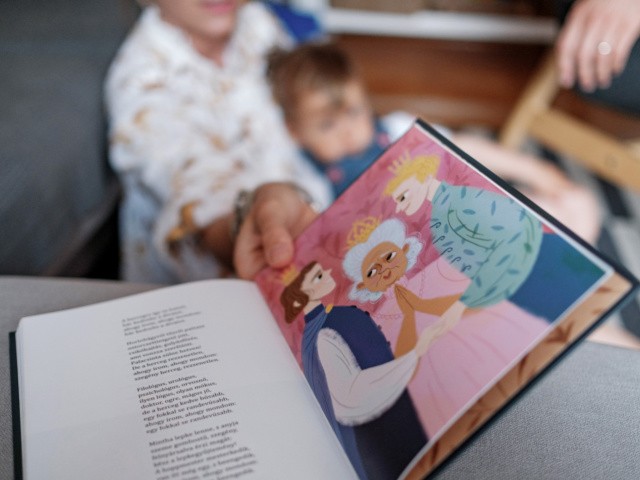 In this photo illustration, a Hungarian family read tales from the storybook “Wonderland Is for Everyone” on June 23, 2021, in Budapest, Hungary. Hungary has come under fire from several European Union member countries after passing new legislation banning the “promotion” of homosexuality among minors through books and films (Photo by Janos Kummer/Getty Images).

“After we won the election in 2010 with a two-thirds majority, we decided to build a family-friendly country and to strengthen families raising children,” Hungary’s Minister for the Family, Katalin Novak, who is herself a mother of three said.

In a 2014 address to the European Parliament, Pope Francis said Europe is often perceived as “elderly and haggard,” like a “grandmother, no longer fertile and vibrant.”

As a result, the rest of the world looks upon it “with aloofness, mistrust and even, at times, suspicion,” he said. The “great ideas which once inspired Europe,” he said, seem to have been replaced “by the bureaucratic technicalities of its institutions.”

The following year, the pope lamented Europe’s falling birth rates, noting its influence on the rise in immigration.

“If a country has no children, migrants come to occupy the place,” Francis told Portuguese radio.

“I think the birth rates in Italy, Portugal and Spain are almost 0 percent… there are no children, there are empty spaces,” he said.

The birth rate has plummeted in part because Europeans are overly focused on their personal well-being, he said. “I heard it in my own family, from my Italian cousins ​​here, years ago: ‘No, no kids, we prefer to go on vacation or buy a villa, or this or that.’ And then, the elderly are left all alone,” he said.

“Europe has not yet died,” he said. “It is half grandmother, but can return to being a mother.”