Russia warned Wednesday “retaliatory measures” are ready if the U.S. and its NATO allies reject its security demands for the Ukraine border and continue their “aggressive” policies, entirely ignoring U.S. Vice President Kamala Harris and her threats of direct action just 24 hours earlier.

Russia has repeatedly denied it has any desire to invade its neighbor but critics point to the 100,000 troops massed near Ukraine’s border and a series of war games currently underway in the region as a signal of future intent.

Speaking to lawmakers Wednesday, AP reports Russian Foreign Minister Sergey Lavrov said he and other top officials will advise President Vladimir Putin on the next steps after receiving written replies from the United States to the demands. 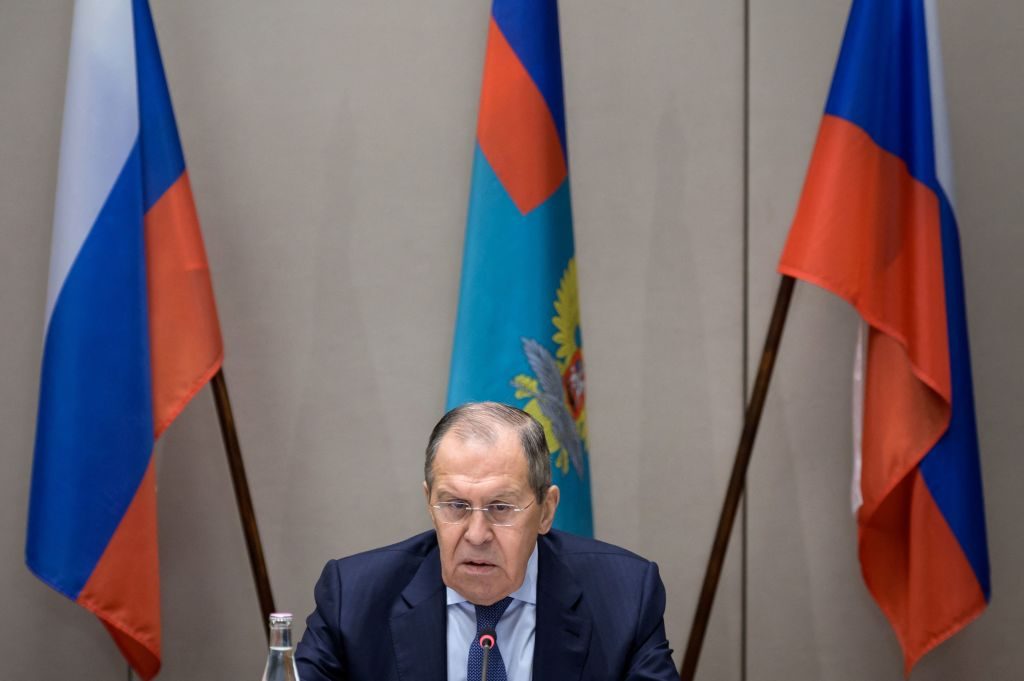 Russian Foreign Minister Sergei Lavrov gives a press conference in Geneva on January 21, 2022 following a meeting with US Secretary of State. (GIOVANNI GREZZI/AFP via Getty Images)

Russia seeks guarantees NATO will never admit Ukraine and other ex-Soviet nations as members and the alliance will roll back troop deployments in other former Soviet bloc countries.

Those answers are expected by Friday — even though the Western allies have already made clear they will reject the top Russian demands.

“If the West continues its aggressive course, Moscow will take the necessary retaliatory measures,” Lavrov said.

While Russia is currently waiting for the American reply, Lavrov indicated it wouldn’t wait forever: “We won’t allow our proposals to be drowned in endless discussions,” he said.

NATO said this week it was bolstering its deterrence in the Baltic Sea region and the U.S. ordered 8,500 troops on higher alert for potential deployment to Europe. Western nations have also sent planeloads of weapons to help Ukraine strengthen its defenses.

Amid the escalating tensions, Ukrainian officials have sought to calm nerves.

Ukraine’s Foreign Minister Dmytro Kuleba said Wednesday while the concentration of Russian troops near Ukraine poses a threat, “their number is now insufficient for a large-scale offensive.”

Ukraine: London Accuses Putin of Trying to Install a Puppet Regime in Kievhttps://t.co/Tr7R6No4F8

“They are still missing some key military elements and systems to mount a big, full-scale offensive,” Kuleba told reporters.