President Vladimir Putin on Sunday ordered his military’s nuclear deterrent forces to be on alert as Russia’s invasion of Ukraine met increasing resistance as it enters its fourth day.

Putin told defense chiefs “high alert” status is imperative as the West was accused by Moscow of taking “unfriendly” steps against his country.

NBC News reports the move was in direct response to leading NATO powers making what he called “aggressive statements,” according to Tass, the state-owned Russian news agency.

Russia, like the United States, has thousands of nuclear warheads that it maintains as a deterrent to an attack.

The move is also a reaction to the West announcing hard-hitting financial sanctions against Russian businesses and key individuals, including Putin himself, the president said in televised comments.

The Russian defense minister, Sergey Shoygu, and the chief of the military’s general staff have been ordered to put the nuclear deterrent forces on high alert status in what was defined as a “special regime of combat duty.” 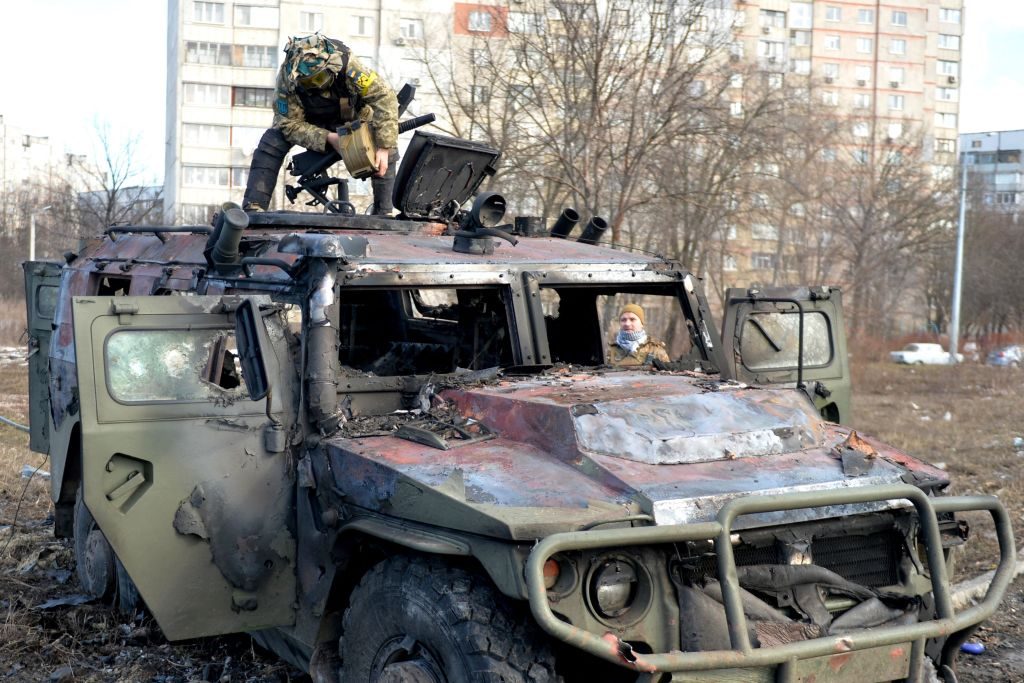 Putin, in giving the nuclear alert directive, cited not only the alleged statements by NATO members but the hard-hitting financial sanctions imposed by the West against Russia, including the Russian leader himself.

“Western countries aren’t only taking unfriendly actions against our country in the economic sphere, but top officials from leading NATO members made aggressive statements regarding our country,” Putin said in televised comments, AP reports.

The U.S. ambassador to the United Nations responded to the news from Moscow while appearing on a Sunday news program.

“President Putin is continuing to escalate this war in a manner that is totally unacceptable,” Ambassador Linda Thomas-Greenfield said. “And we have to continue to condemn his actions in the most strong, strongest possible way.”

UPDATE — 11:49 AM EST: The European Union will finance and deliver weapons to Ukraine as the country battles back against a sustained invasion by Russia’s military, top officials announced Sunday.

UPDATE — 1:09 PM EST: German media reports that Russians are “limed up at ATMs around the country” to take out foreign currency due to the West’s sanction on Russia. The sanctions have prompted concerns of a run on Russian banks, according to The Telegraph UK.

Russians rush for Dollar: Lined up at ATMs around the country to withdraw foreign currency as new sanctions to punish the Kremlin for its invasion of Ukraine sparked fear the ruble could collapse. Tinkoff saying 153 for Ruble, Alpha 110 per Dollar! https://t.co/F07kbF83Uv pic.twitter.com/CFkTRtZhzE

Kyiv mayor Vitali Klitschko's response when asked by AP's @FrancescaEbel if there are plans to evacuate civilians from the city
… after a few seconds silence….
"We can't do that, because all ways are blocked," he finally said. "Right now we are encircled."

UPDATE — 2:47 PM EST: A pair of Russian billionaires — Mikhail Fridman and Oleg Deripaska — are calling for peace between Russia and Ukraine amid Russian President Vladimir Putin’s invasion of Ukraine.

Two Russian billionaires, Mikhail Fridman and Oleg Deripaska, called for an end to the conflict triggered by President Vladimir Putin's assault on Ukraine, with Fridman calling it a tragedy for both countries' people. https://t.co/BnfgD3sdXr