A Muslim mob stoned to death a 41-year-old man accused of blasphemy in Pakistan Saturday evening, before hanging his body from a tree.

Mushtaq Ahmed was reportedly seen burning the Qur’an inside a mosque in the Punjab province of eastern Pakistan.

Mian Mohammad Ramzan, the custodian of the village mosque in the Khanewal district, told police he saw smoke inside the mosque, and upon investigating discovered Ahmed had burned one copy of the Qur’an and was attempting to burn another.

He said he tried to make the man stop but an angry mob of some 300 men soon formed. Police officer Mohammad Iqbal and two subordinates arrived at the mosque and reportedly tried to take custody of the man before he could be harmed, but the group began throwing stones at them as well, seriously injuring Iqbal and slightly wounding the other two officers. 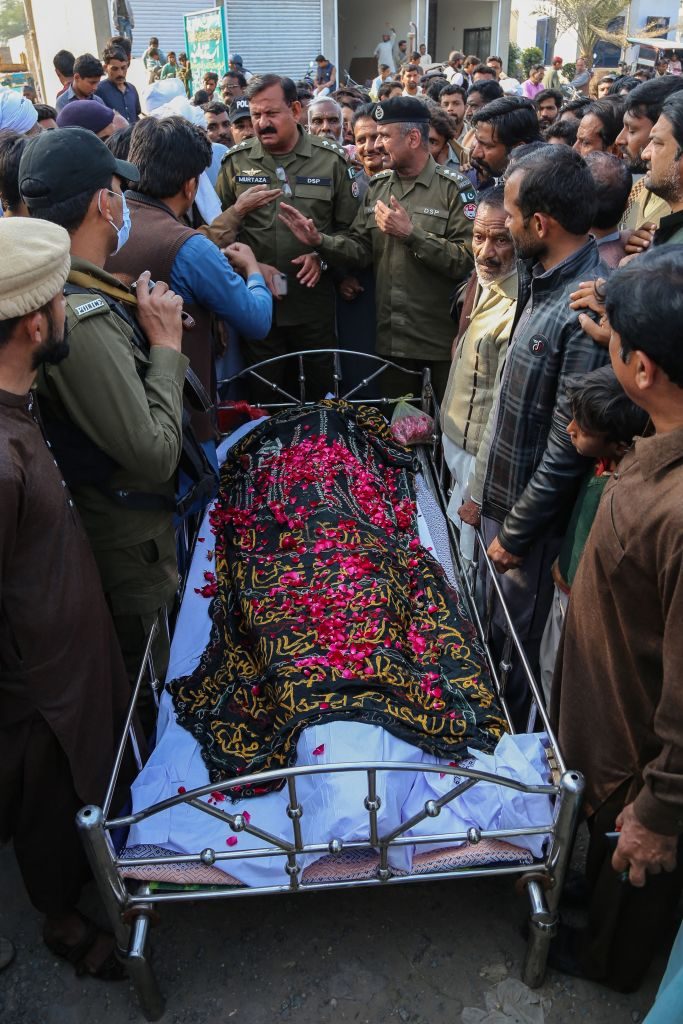 Relatives, locals and Police stand near a coffin containing the body of a man during his funeral at Khanewal district on February 13, 2022, who was killed after allegedly an angry mob stoned him to death. (SHAHID SAEED MIRZA/AFP via Getty Images)

After stoning Ahmed, the mob then hanged his body from a tree.

Tulamba police chief Munawar Gujjar identified the victim as Mushtaq Ahmed, a mentally unstable man from a nearby village.

“The ill-fated man has been mentally unstable for the last 15 years and according to his family often went missing from home for days begging and eating whatever he could find,” Gujjar said.

Gujjar said police were scanning surveillance videos to try to identify the assailants and so far 36 have been arrested.

“We have zero tolerance for anyone taking the law into their own hands & mob lynchings will be dealt with full severity of the law,” Khan said in a Twitter post. “Have asked Punjab IG for report on action taken against perpetrators of the lynching in MIan Channu & against the police who failed in their duty.”

Allama Tahir Mahmood Ashrafi, an aide to Khan on religious affairs, pledged to bring the perpetrators to justice, noting that no one had the right to take the law into his own hands, even if a suspect was involved in an offence such as blasphemy.