ROME — The global oppression or persecution of Christians has increased significantly over the past two years, Vatican News reported Monday.

Citing a recent report by the pontifical foundation Aid to the Church in Need (ACN), Vatican News noted anti-Christian terrorist violence has experienced a “sharp rise” in Nigeria where “more than 7,600 Nigerian Christians were reportedly murdered between January 2021 and June 2022.”

Violence against Christians has also increased in Asian nations like India and Sri Lanka, the article states, and India saw “710 incidents of anti-Christian violence between January 2021 and the start of June 2022, often driven by Hindu nationalists.” 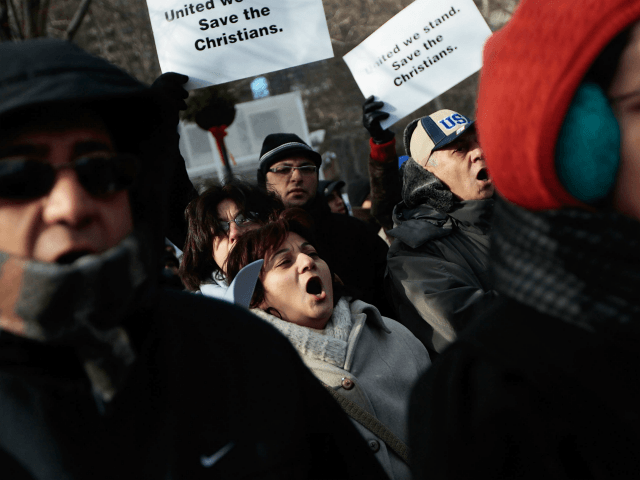 File/A supporter of Egypt’s Coptic Christian community shouts during a protest near the U.N. headquarters against the Egyptian government’s treatment of its Christian minority. Coptic Christians are one of the oldest Christian populations in the world and have been practicing in Egypt since the beginning of Christianity, but after some recent violent incidents are alleging persecution by Egypt’s Muslim majority government. (Photo by Chris Hondros/Getty)

ACN released “Persecuted and Forgotten? A Report on Christians Oppressed for Their Faith 2020-22” in London on November 16 at the beginning of “Red Week” (November 16-23), which culminates in Red Wednesday, when buildings, monuments, and landmarks in several different countries are lit up in red.

The report revealed that in 75 percent of the 24 countries surveyed, oppression or persecution of Christians has increased over the past two years.

Nigerian Bishop Jude Arogundade, whose diocese was stormed in June by gunmen who killed more than 40 people, gave the keynote address at the UK launch of the report in the Houses of Parliament.

Bishop Arogundade has expressed concern that “no one seems to pay attention to the genocide” taking place in Nigeria in swathes of the north and the Middle Belt.

“The world is silent as attacks on Churches, their personnel and institutions have become routine. How many corpses are required to get the world’s attention?” he asked.

In his keynote address, Arogundade said that the Catholic Bishops’ Conference of Nigeria has repeatedly spoken against the country’s unprecedented insecurity situation “but to no avail.”

“We have walked for life, protested and even called the President (Muhammadu Buhari) to resign if he is incapable of fulfilling the basic purpose of government — the security of lives and properties of citizens. Even at that, nothing has changed,” he said.

“With 3,478 people killed as of June this year and the increased cases of terror thereafter,” it is time for governments and all people of goodwill “to compel the Nigerian government to stop the genocide,” he said.

“Or, in the least, ask for help from other countries before Nigeria is overrun, as is the case of Afghanistan,” he added.

“The entire nation is on the edge, apprehensive of a major offensive that may sweep round the entire country,” he said. “Already, many embassies were forced to close down (over the) last two weeks as a result of an intelligence report predicting (a) major attack in Abuja, the federal capital of Nigeria.”

A band of unidentified gunmen have kidnapped a Catholic priest along with a seminarian in southern Nigeria, demanding a ransom of $120,000 for their release. https://t.co/SaJZFLDO8a

The bishop also attempted to disabuse his hearers of fake news circulating regarding the causes of the persecution.

“This pogrom is not caused by climate change as believed by some Western climate change ideologists. It is far from it,” he said. “It is clearly the use of terrorism to accomplish an age-long ethno/religious objective. The world must stop this evil and hold the perpetrators accountable.”