Hans Kluge, European regional director for the World Health Organization (W.H.O.), said Monday that booster shots for already vaccinated people are an important tool for protecting the most vulnerable from the Chinese coronavirus.

“A third dose of vaccine is not a luxury booster taken away from someone who is still waiting for a first jab. It’s basically a way to keep the most vulnerable safe,” Kluge said on Monday.

“We have to be a little bit careful with the booster shot, because there is not yet enough evidence, but more and more studies show that a third dose keeps vulnerable people safe, and this is done by more and more countries in our region,” he said.

Kluge added that scientists needed further studies on booster shots and urged European nations with excess supplies of vaccines to consider donating them to less prosperous countries in Eastern Europe and Africa.

Last Wednesday, W.H.O. director Tedros suggested booster shots were a luxury for wealthy nations – the phrasing Kluge was evidently responding to when he insisted booster shots are not a “luxury” stolen from those who have not been vaccinated yet.

“When some countries afford to have the booster and others are not even vaccinating the first and second round, it’s a moral issue,” Tedros said. “In addition, there is a debate about whether booster shots are effective at all.”

Tedros argued that countries with large enough vaccine stockpiles to consider booster shots should, instead, donate those doses to countries where only a fraction of the population has been vaccinated. He said the danger of new vaccine-resistant mutations emerging from those countries was a greater concern than the loss of vaccine effectiveness over time that booster injections may address.

Several highly vaccinated countries are offering booster shots, notably including Israel. The Biden administration is pressuring health officials to authorize boosters for Americans by September 20, even though the Centers for Disease Control (CDC) has stated it needs more data to evaluate their effectiveness: 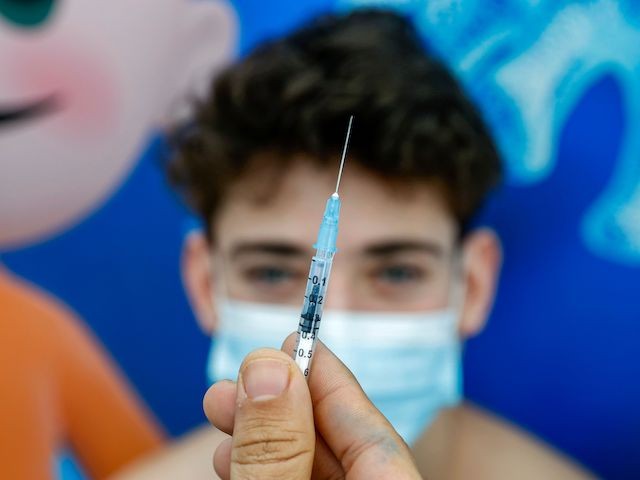 Michael, a 16-year-old teenager, receives a dose of the Pfizer-BioNtech COVID-19 coronavirus vaccine at Clalit Health Services, in Israel’s Mediterranean coastal city of Tel Aviv on January 23, 2021. – Israel began administering novel coronavirus vaccines to teenagers as it pushed ahead with its inoculation drive, with a quarter of the population now vaccinated, health officials said (Photo by JACK GUEZ / AFP) (Photo by JACK GUEZ/AFP via Getty Images).

CNBC noted Monday that pressure for boosters is growing as studies show declining effectiveness over time for the popular Pfizer-BioNTech vaccine, while the American public is growing restless over much-hyped waves of “cases” that persist despite the vaccines:

Several studies suggest the authorized Covid [Chinese coronavirus] vaccines remain effective in preventing severe disease and hospitalization but may be less effective in preventing infection or mild symptomatic illness, according to the slides submitted by CDC scientist Dr. Sara Oliver. The CDC’s Advisory Committee on Immunization Practices is meeting Monday to consider booster shots for all eligible Americans. They are also scheduled to vote on endorsing the Food and Drug Administration’s final approval of Pfizer’s vaccine.

Since the highly contagious delta variant first appeared, vaccine efficacy has ranged between 39% and 84%, according to the presentation, which referenced several separate studies. One study looking at health-care workers and first responders showed overall vaccine efficacy fell to around 65% in July – down from about 90% in February, according to the slides. Israel data shows the efficacy of Pfizer’s vaccine has fallen to as low as 39% in that country.

Kluge said Monday that high transmission rates in Europe are “deeply worrying, particularly in the light of low vaccination uptake in priority populations in a number of countries.”

He cited a University of Washington study that projected up to 236,000 more coronavirus deaths in Europe by December 1.

Kluge blamed “vaccine skepticism and science denial” for persistently high infection rates, while his office blamed “insufficient production” and “insufficient access,” along with public resistance to the shots. He also decried the “exaggerated easing” of coronavirus restrictions, including increased travel during the summer: 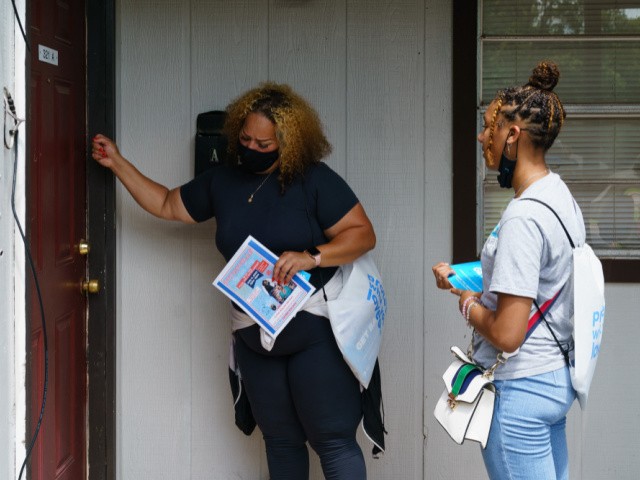 Volunteers and staffers knock on a door during an outreach effort to inform residents about an upcoming COVID-19 vaccination event, on June 30, 2021, in Birmingham, Alabama. – A black minority suspicious of vaccines in general, and conservative white rural people convinced that the vaccine is more dangerous than Covid-19: Alabama and several southern states in the United States have among the lowest vaccination rates, making this deprived region an Achilles heel in the face of the coronavirus (ELIJAH NOUVELAGE/AFP via Getty Images).

In addition to endorsing booster shots for vulnerable people, Kluge called for teachers, school personnel, and children older than 12 to get vaccinated as the school year gets underway in Europe.