In the wake of a baby formula shortage brought on by Joe Biden’s economic policies, a brother and sister are making a timely and somewhat historic entry into the market by launching ByHeart in Reading, Pennsylvania.

Until now, just a handful of companies have had 90 percent of the market share — Abbott, Gerber, Mead Johnson, and Perrigo Nutritionals — in part because of federal contracts to supply formula to low-income families. 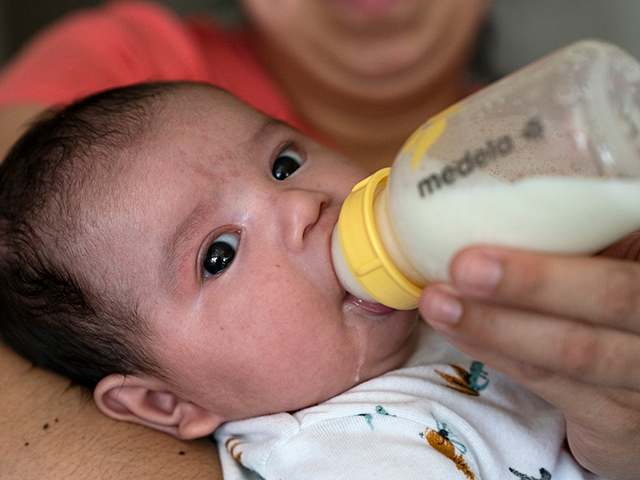 Two-month-old Jose Ismael Gálvez is fed a bottle of formula by his mother, Yury Navas, 29, of Laurel, Maryland, from her dwindling supply of formula at their apartment in Laurel, Md., Monday, May 23, 2022. (Jacquelyn Martin/AP)

And supplies dried up when Abbott shut down its Michigan Similac plant earlier this year after a bacterial infection that led to the deaths of two infants was alleged to have originated there.

“We are disrupting a category that has not been disrupted in decades,” Mia Funt, 39, cofounder and president of ByHeart, said in an interview with the Philadelphia Inquirer last week.

She founded the company with her brother and fellow University of Pennsylvania graduate, Ron Belldegrun, 36, who is chief executive officer.

ByHeart sold its FDA-approved formula to customers in all 50 states within a week of launch and they are planning on expanding the plant, Funt and Belldegrun said.

ByHeart’s founders say they are only the fourth vertically integrated infant formula brand in the United States with end-to-end oversight of production, a stable supply chain, and research and development. ByHeart processes raw, whole milk from dairy farms, turns it into powder formula using a patented blend of the two proteins in breast milk, alpha-lactalbumin and lactoferrin, as well as broken down proteins, and gets the closest to breast milk in the market, the founders said.

In 2019, ByHeart acquired and updated the manufacturing facility in Reading rather than using a contract manufacturer. ByHeart said the plant cost $40 million, including preventive food safety measures, to convert the plant from toddler food production to infant formula. The company has raised a total of $190 million. Investors include D1 Capital Partners, OCV, Polaris Partners, Bellco Capital, Two River and Red Sea Ventures and AF Ventures.

The company also got a $1.75 million grant from Pennsylvania as part of the $10 million the state invested in ByHeart.

“In addition to supporting good health from birth, this investment in ByHeart will create good jobs, economic impact, and support for agriculture in the commonwealth and, indeed, the entire country currently suffering from shortages in this supply ― it’s an all-around win,” Gov. Tom Wolf said in April at the plant’s ribbon-cutting ceremony.

Biden has turned to foreign formula makers to ease the shortage. A UPS jet with a planeload of Australian formula — the equivalent of about two million baby bottles worth — landed at Philadelphia International Airport on Tuesday and will be distributed regionally and nationally.

But the baby formula shortage continues, even as Gerber increased the amount of its infant formula available to consumers by about 50 percent in March and April and Mead Johnson is supplying 30 percent more product as of May, according to the Federal Drug Administration, the Inquirer reported.