ROME — Pope Francis will once again shuttle migrants back to Italy after his upcoming visit to Cyprus, the Associated Press (AP) reported Thursday.

Cyprus government spokesman Marios Pelekanos told AP that the pope intends to transfer an unspecified number of migrants from Cyprus to Italy after his three-day visit to the country in December.

In early November, the Holy See Press Office announced that the pope would undertake a 5-day papal trip to Cyprus and Greece, spending December 2-4 in Nicosia, the capital of Cyprus, then visiting the Greek city of Athens and the island of Lesbos from December 4-6, after which he will return to Rome.

The last time the pope visited Lesbos in 2016 he brought a dozen Syrian Muslims back to Italy with him on the papal plane. The Vatican describes the pope’s move as a “gesture of welcome” and enlisted the community of Sant’Egidio to provide the initial hospitality for the migrants. 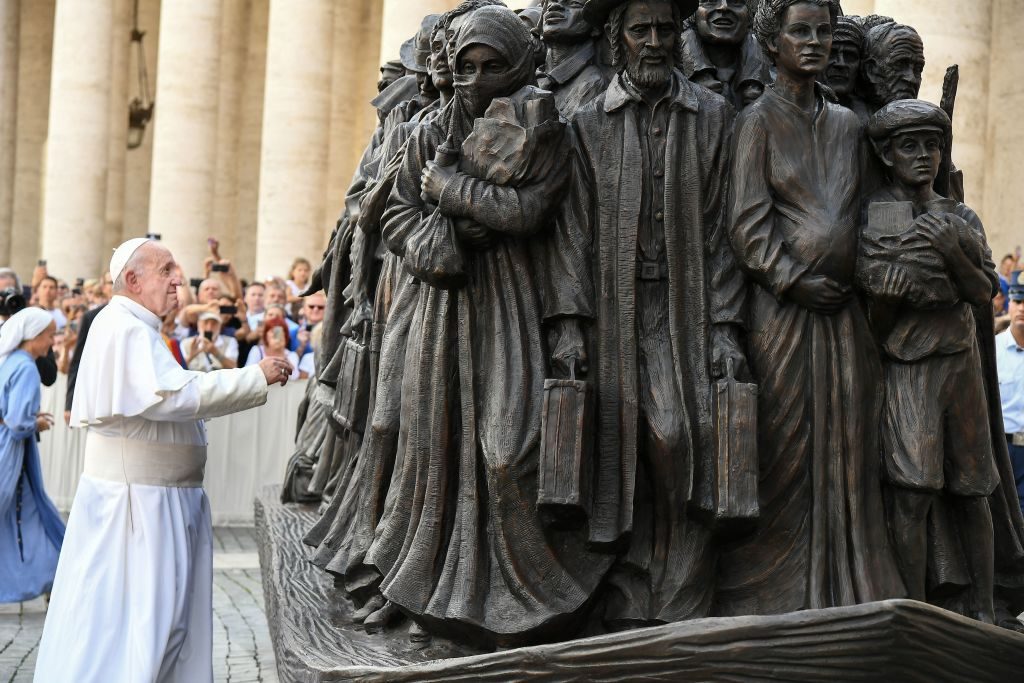 Pope Francis attends the unveiling of a sculpture called “Angels Unaware” by Canadian sculptor Timothy P. Schmalz depicting a group of 140 migrants of various cultures and from different historic times, following a mass for World Day of Migrants and Refugees on September 29, 2019 at St. Peter’s Square in the Vatican. (VINCENZO PINTO/AFP via Getty Images)

At that time, the Vatican’s Secretariat of State negotiated the transfer with the competent Greek and Italian authorities. While on Lesbos, the pontiff had visited the Moria detention center, which held some 3,000 asylum-seekers.

Francis was accompanied on that visit by two other religious leaders, the Orthodox Patriarch Bartholomew and the Greek Archbishop Ieronymos and the three leaders signed a joint declaration expressing their concern for Europe’s migrant crisis.

There the pope prayed to God that all might “recognize that together, as one human family, we are all migrants, journeying in hope to You, our true home, where every tear will be wiped away, where we will be at peace and safe in Your embrace.”

Pope Francis said Sunday that he hears the cries of migrants in Libya and appealed for an end to repatriation and the establishment instead of “regular migration routes.” https://t.co/hdUPT5mOYy

On Thursday, Mr. Pelekanos said the Vatican is coordinating the new migrant transfer with Cypriot authorities but revealed no specifics as to the number of migrants or the details of their trip.

The Holy See Press Office said Francis is traveling to Cyprus and Greece in response to invitations from the two countries’ governments and bishops’ conferences.

So far in 2021, Italy has taken in nearly double the number of migrants it received in 2020, the International Organization for Migration (IOM) reported last Monday.