ROME — Pope Francis presented Saint Joseph, the foster father of Jesus, as a “persecuted and courageous migrant” in a provocative address in the Vatican Wednesday.

The Evangelist Matthew describes Saint Joseph “as a persecuted and courageous migrant,” the pope said during his weekly General Audience in the Vatican. “This particular event in the life of Jesus, which also involves Joseph and Mary, is traditionally known as ‘the flight into Egypt.’”

“The family of Nazareth suffered such humiliation and experienced first-hand the precariousness, fear and pain of having to leave their homeland,” he continued. “Today so many of our brothers and sisters are still forced to experience the same injustice and suffering.”

“Today I think we need a prayer for all migrants; migrants and all the persecuted, and all those who are victims of adverse circumstances: be they political, historical or personal circumstances,” the pope said.

Let us “think of the many people who are victims of wars, who want to flee from their homeland but cannot,” he said. “Let us think of the migrants who set out on that road to be free, so many of whom end up on the street or in the sea.”

Let us “think of Jesus in the arms of Joseph and Mary, fleeing, and let us see in him each one of the migrants of today,” he continued. “Migration today is a reality to which we cannot close our eyes. It is a social scandal of humanity.” 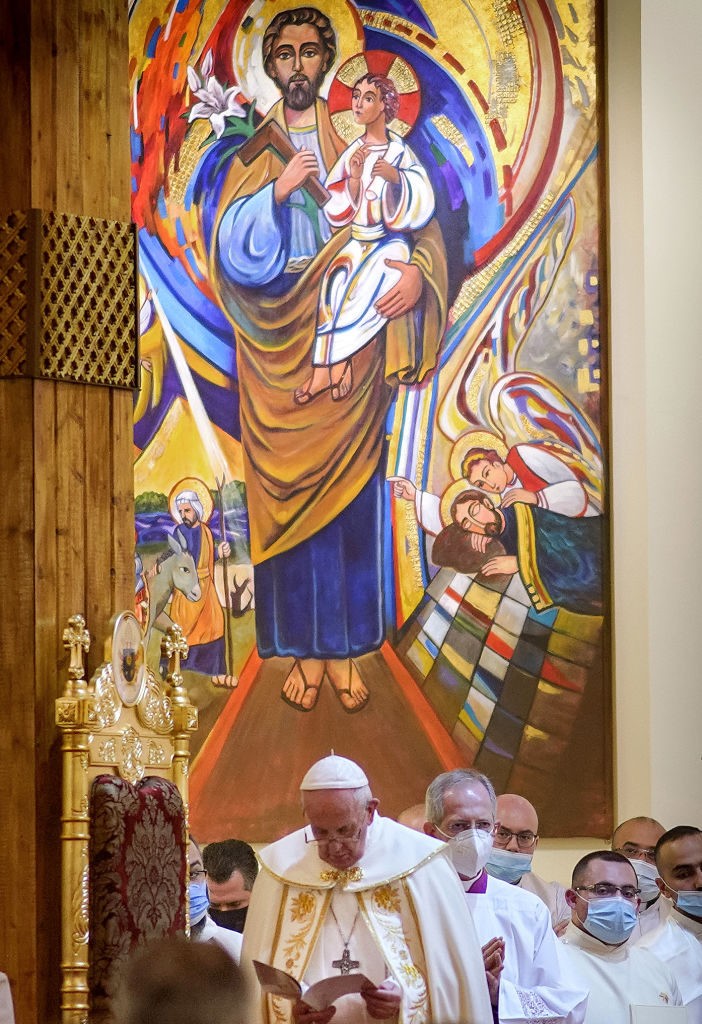 During the audience, Francis counterposed King Herod with Saint Joseph, the first a “dictator” and the second a saint.

“The flight of the Holy Family into Egypt saves Jesus, but unfortunately it does not prevent Herod from carrying out his massacre,” the pope said. “We are thus faced with two opposing personalities: on the one hand, Herod with his ferocity, and on the other hand, Joseph with his care and courage.”

Warning that all of us “have in our heart the possibility of becoming little Herods,” Francis painted a picture of a power-hungry despot who removed anyone in his path.

“Herod wants to defend his power, his own skin, with ruthless cruelty, as attested to by the execution of one of his wives, some of his children and hundreds of opponents,” he said. “He was a cruel man: to solve problems, he had just one answer: to kill.”

Herod “is the symbol of many tyrants of yesteryear and of today,” he continued. “And for them, for these tyrants, people do not count; power is what counts, and if they need space for power, they do away with people.”

“And this happens today: we do not need to look at ancient history, it happens today. He is the man who becomes a ‘wolf’ for other men,” he said.

Pope Francis has reiterated his call for a more welcoming attitude toward migrants, insisting everyone has the right to “dream of a better future.” https://t.co/tdUk6Oeeju

At the end of his address, Francis closed with a prayer for migrants directed to Saint Joseph.

“Saint Joseph, you who have experienced the suffering of those who must flee, you who were forced to flee to save the lives of those dearest to you, protect all those who flee because of war, hatred, hunger,” the pontiff said.

“Support them in their difficulties, strengthen them in hope, and let them find welcome and solidarity,” he continued. “Guide their steps and open the hearts of those who can help them. Amen.”
Follow @tdwilliamsrome