Manuel Merino, who became president of Peru on Tuesday, resigned on Sunday after nationwide protests erupted against his rule, killing at least two people.

Vizcarra is a centrist, technocratic independent who came to power under Kuczynski, who won a narrow victory against conservative candidate Keiko Fujimori in 2016. Merino is a member of the progressive Popular Action party.

Vice President Mercedes Araóz declared herself president during an attempt to oust Vizcarra in October 2019 that ended with her removal from office and Vizcarra’s return, so Vizcarra had no vice presidents at the time of his removal last week. 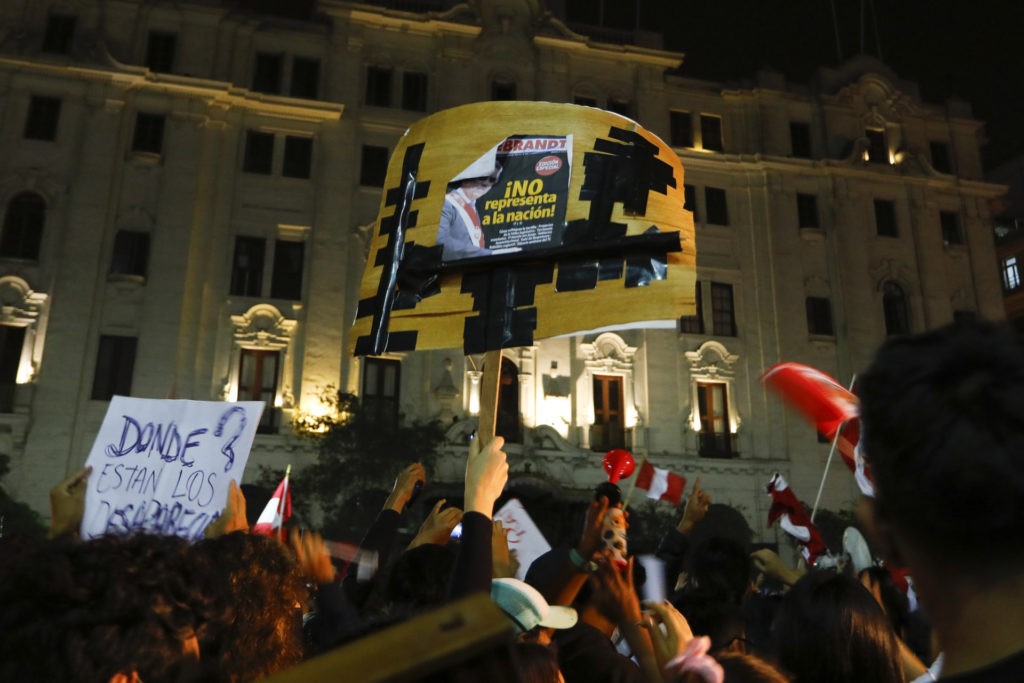 The last attempt to remove Vizcarra also left Peru without a president for some weeks before the supreme court ruled that he had successfully dissolved Congress before it moved to remove him last year.

Merino resigned after a weekend of violent protests against his takeover that left at least two dead and eight missing as of Monday morning, according to Peruvian media. Human rights groups in the country filed charges against Merino and senior members of his cabinet following his resignation for “qualified homicide” in response to the protest deaths.

Congress convened on Sunday night to rapidly choose a new president and erase the power vacuum but lawmakers failed to agree on a successor. The centrist Purple Party proposed re-installing Vizcarra to maintain stability, which would mean the last week’s political turmoil would have resulted in no meaningful changes to those in power.

Merino resigned after losing over half of his cabinet in response to national protests. He called for a new era of “peace and unity.”

“I know that many Peruvians are fed up with the whims of the political class. … all of Peru is mourning. … These events should be thoroughly investigated by corresponding authorities to determine all responsible,” Merino said in his resignation speech, referring to the deaths of two protesters under mysterious circumstances.

Merino also denied that he had participated in any unconstitutional power grab.

“Since before the vacancy [of Vizcarra], there were voices trying to confuse the country saying that there was an attempt to oust the president to delay elections and that a group, with my participation, sought to perpetuate itself [in power],” Merino said. “I am a democrat, I respect the laws and this is a transition government. Our first objective is to guarantee transparent and clean elections. Nothing and no one can impede them.”

Merino also demanded Congress not leave a “power vacuum” and appoint a president as soon as possible. As of press time, Peru does not have a president or vice president. Congress, currently fragmented after several parties lost significant membership in the election following Vizcarra’s dissolution of the lawmaking body last year, entertained several proposals on Sunday, many potential presidents from the centrist Purple Party and at least one member of the Broad Front (Frente Amplio), a socialist party, but none received enough to support to assume the presidency.

The Purple Party has also proposed simply annuling Vizcarra’s ouster and returning him to power.

“We Peruvians cannot wait. This week has proven that appointing a new President of the Republic under the current political, sanitary, and economy circumstances, and forming a new consensus cabinet, will lengthen the crisis and suffering of Peruvians,” the Party said in a statement. “Not one more death.”

Peru has suffered tremendously under the Chinese coronavirus pandemic, imposing some of the most severe lockdowns in the world and struggling to maintain clean streets and public facilities, including hospitals. Much of the civil unrest in the country following extreme, violent police action against night clubs and other businesses that dared to defy lockdown restrictions. Peru has documented nearly 1 million coronavirus cases and 35,231 deaths at press time.

Vizcarra celebrated Merino’s resignation on Sunday, calling him a “lowly dictator” and calling his departure “a step on the long path to restoring democracy in our country.”

“Mr. Merino’s resignation is a step, it does not solve the problem, because the demand all of Peru has made is not for Mr. Merino to take a step aside, its to recover democracy,” Vizcarra said.

Vizcarra has faced growing opposition in Congress since he took over from Kuczynski in 2018. A year ago, Vizcarra attempted to pass reforms that would have made it more difficult for Congress to appoint justices to the supreme court – a move meant to combat corruption and bribery. Lawmakers openly denied Vizcarra’s presidential power to do so, so Vizcarra used his constitutional power to dissolve the Congress and call special elections.

After he dissolved Congress, the former lawmakers, ignoring their removal, voted to remove Vizcarra. Some lawmakers swore in his only vice president, Mercedes Aráoz, while others insisted that Pedro Olaechea, who held Merino’s place at the time, was the true president of Peru. No one officially held the position a day until Aráoz caved to pressure and resigned, prompting Congress to accept the constitutionality of Vizcarra’s call for snap elections.

Congress voted by a wide majority to remove Vizcarra last week acting on accusations that he took kickbacks in exchange for public contracts as governor of Moquegua, a claim he denies. The constitution does not require Congress to prove the claim to vote on his removal.