The video highlights the longtime Olympics dilemma of authoritarian regimes using their athletes as political propaganda tools, despite detailed rules banning the use of the Olympic podium and some other key venues from being used for political purposes. Communist and socialist countries, in particular, have stood out in the 2021 Tokyo Olympics for attempting to use athletic victories to promote their agendas.

López won his fourth medal in the super heavyweight division of the sport on Monday, a fact widely exploited by Communist Party state media in his home country. López himself dedicated his victory to late dictator Fidel Castro shortly after the win.

In the immediate aftermath of his win, a video circulating online shows López’s handlers giving him a mobile phone and informing him that Castro regime figurehead Miguel Díaz-Canel was calling to congratulate him. Amid effusive praise from the titular “president,” López responded by repeatedly thanking him and stating, “mission accomplished.”

“We committed since we left the Plaza of the Revolution [in Havana] that we would commit,” López said, “I’m happy to be able to show the world how great we are.”

One of the handlers around him — notably all white men, unlike López — can be heard whispering in the video, “patria o muerte, venceremos,” the official slogan of the Cuban Revolution, meaning “fatherland or death, we will overcome.” The man repeats the phrase several times, as to pressure López into saying it. López does not, resulting in the man yelling the phrase louder and exorting the group to shout in reply, “venceremos!”

A woman of color also appears as part of the group, but is recording the conversations, apparently a journalist working to document the moment.

The video ends with another male handler shouting, “Thank you to the Revolution, Mr. President!” and “Viva Fidel!”

The Castro regime has made the use of patria o muerte a priority in light of widespread anti-communist protests on the island rejecting the slogan by using its opposite, patria y vida, or “fatherland and life.” The latter comes from a song published in February by a group of Afro-Cuban artists bearing the same name and has become a rallying cry for the end of the 62-year communist regime.

“Patria y vida” was among the preferred slogans used during the protests of July 11, in which tens of thousands of Cubans are believed to have participated in as many as 40 cities nationwide. The protests have resulted in outsized violence against suspected political dissidents, including documented incidents of police shooting unarmed civilians in their homes, and summary trials of as many as 30 people at a time, convicted of dubious crimes like “disrespect” and “propagating an epidemic [coronavirus].”

While López’s independent statements appeared insufficient to handlers in Tokyo at the time of his call with Díaz-Canel, López has not hesitated to praise communism on prior occasions. In an interview with Granma, the official newspaper of the Communist Party of Cuba, López dedicated his historic fourth gold medal to Castro.

“I dedicate this one to Fidel. If we have been able to do this, it is became of him, who conceived of sport from the point of view of participation,” López told Granma. “I am a fruit of that wise decision. It has permitted us to go around the world honoring our flag, which is very powerful.” 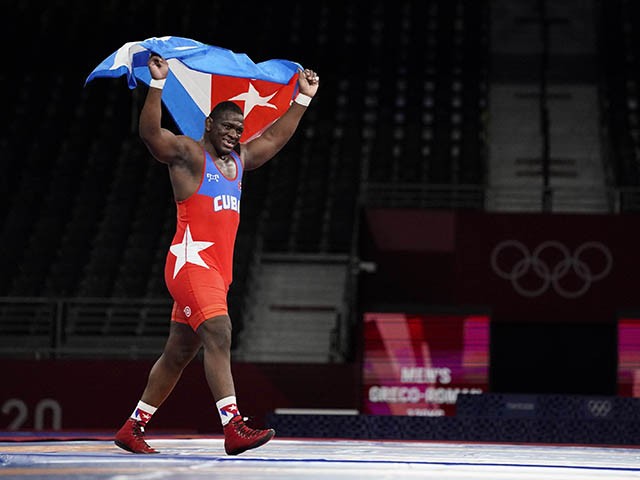 López’s statement echoed those of another athlete representing a dictatorship, Julio Mayora of Venezuela, who dedicated his silver medal in weightlifting to dead dictator Hugo Chávez.

“Give Hugo Chávez a happy birthday. Really, the gift is this silver medal, it is for President Hugo Chávez, “ Mayora said following his win in the 73-kilogram category. Like López, observers noted the presence of a handler during his interviews apparently ensuring that he properly showed deference to the authoritarian regime that had sent him to Tokyo – in his case, Venezuela’s minister of sport himself, Melvin Maldonado. Maldonado set up a call between Mayora and dictator Nicolás Maduro.

While not vocally praising the Bolivarian Revolution, Venezuela’s arguably most successful Olympian ever, long-jumper Yulimar Rojas, also has a history of praising Chávez and claiming her victories would be impossible without him. Rojas won a gold medal in the triple jump event this week, breaking a world record in the process.

Cuba’s stranglehold on the expressive freedom of its athletes has triggered a decades-long exodus from the island, many of them defecting under dangerous circumstances. The result has been a boon of talent for much of the rest of the world. At least 22 athletes of Cuban origin are competing in the Tokyo Olympics under other flags this year, including nations as far-flung as Poland, Azerbaijan, and Turkey. The male gold medalist in the triple jump, Pedro Pablo Pichardo, is an ethnic Cuban who brought the medal home to Portugal.

The list of 22 does not include the significant number of Cuban-Americans on the U.S. team. The flagbearer for the American Olympic team this year at the Opening Ceremonies is of Cuban origin: baseball player Eddy Álvarez. At least two other Cuban-Americans, Nick Martínez and Triston Casas, are also competing on the Olympic baseball team. Team USA also boasts a women’s judoka competitor, Angélica Delgado, of Cuban origin.