The Haitian prime minister’s office told the AP on January 3 a group of “bandits and terrorists” shot at Henry on January 1 as he exited a church hosting the ceremony. The armed men reportedly attempted to penetrate a security team escorting Henry out of the building while “hiding” behind the church’s walls. The attackers also allegedly “threatened” the church’s bishop by “surrounding” the house of worship, according to Henry’s office.

The prime minister’s spokesman described the suspects’ actions as “intolerable,” adding that Haitian police had issued arrest warrants for the attackers. Haiti’s National Police told the AP on January 3 its forces had “secured the area” in Gonaives in which the attempted assassination took place on January 1.

At least one person was killed and several others were wounded in the shooting targeting Prime Minister Henry according to a January 2 report by the leftist Latin American propaganda outlet TeleSUR. Henry was unharmed in the attack. TeleSUR described an exchange of fire between “members of an urban gang” and Prime Minister Henry’s security detail, citing local Haitian media.

“The person [victim of the shootout], whose identity is unknown, was killed in the middle of the shooting between members of an urban gang in the Raboro sector [of Gonaives] and the security forces that protected Henry and other officials,” TeleSUR relayed.

Haiti’s prime minister referred to the incident in a statement posted by his official Twitter account on January 2 in which he thanked the bishop of Gonaives for presiding over the January 1 Haitian Independence Day Mass “despite the tense situation that reigned in the city.”

Henry alluded to a plague of violence currently prevailing throughout Haiti in a separate statement dated January 1 and posted by his Twitter account on January 2.

“Today, our enemies, the enemies of the Haitian people, are the terrorists who do not hesitate to use violence to kill people with all their might, or to kidnap, take away their freedom, to rape them. And do everything for money,” the leader wrote in Haitian Creole.

Prime Minister Henry was forced to abort a speech he was scheduled to recite on January 1 in Gonaives following the alleged attempt on his life. He previously canceled a planned trip to Gonaives in January 2020, also to mark the anniversary of Haiti’s independence from France, amid threats of violence against him.

Prior to the January 1, 2022, attempt on Henry’s life, a local gang boss in Gonaives “had made threats against Henry in local media,” Reuters reported on January 3.

“Henry has pledged to crack down on gangs that authorities have blamed for a spike in kidnappings and for blocking gas distribution terminals in a move that caused a severe fuel shortage in recent months and prompted the U.S. and Canada to urge its citizens to leave Haiti,” the AP noted on Monday. 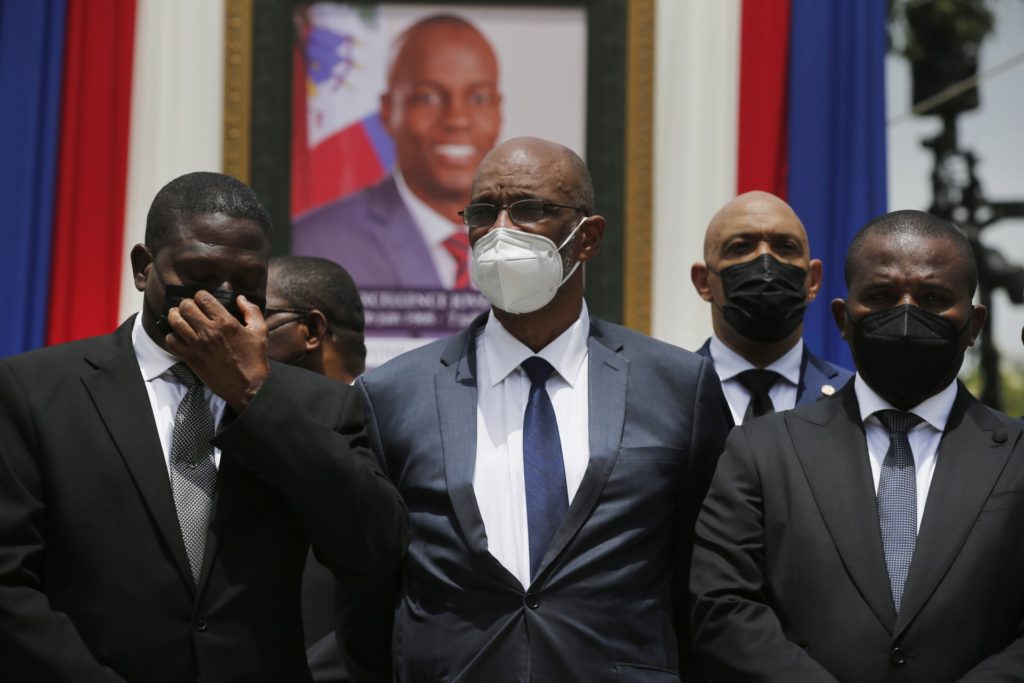 In this July 20, 2021 file photo, Haiti’s designated Prime Minister Ariel Henry, center, and interim Prime Minister Claude Joseph, right, pose for a group photo with other authorities in front of a portrait of slain Haitian President Jovenel Moise at the National Pantheon Museum during a memorial service for Moise in Port-au-Prince, Haiti. (AP Photo/Joseph Odelyn, File)

Henry was sworn in as prime minister of Haiti on July 20, 2021, less than two weeks after the country’s former prime minister, Jovenel Moïse, was assassinated by a group of unidentified mercenaries on July 7, 2021. Much remains unknown about the circumstances surrounding Moïse’s killing. Haitian security forces discovered Moïse’s lifeless body — reportedly with “12 bullet wounds and a gouged eye” — at his personal residence in the Haitian capital of Port-au-Prince. An investigation into the incident led by Haiti’s government remains ongoing, though it has encountered various setbacks. Haitian authorities say a foreign hit squad of at least 28 mercenaries, including former Colombian soldiers, were involved in the assassination of Moïse, 53.