Former Bolivian President Jeanine Áñez fainted during an appearance at a virtual court hearing on Thursday in a trial in which she stands accused of orchestrating a coup d’etat against Bolivia’s socialist government, the independent news agency MercoPress reported on Friday.

Áñez visibly collapsed a few minutes into Thursday’s hearing according to the Latin American news site Infobae, which reported that Áñez “was initially assisted by her daughter Carolina Ribera and her lawyer Norka Cuellar” who were by her side during the episode. The judge presiding over the case chose to postpone the hearing to February 21 in the wake of the defendant’s medical incident.

“Áñez is charged along with former officers of the Bolivian Armed Forces of failing to perform her functions by having adopted decisions contrary to the Constitution and the laws, and of having assumed the presidency without complying with the procedures established for it,” MercoPress observed on February 10. 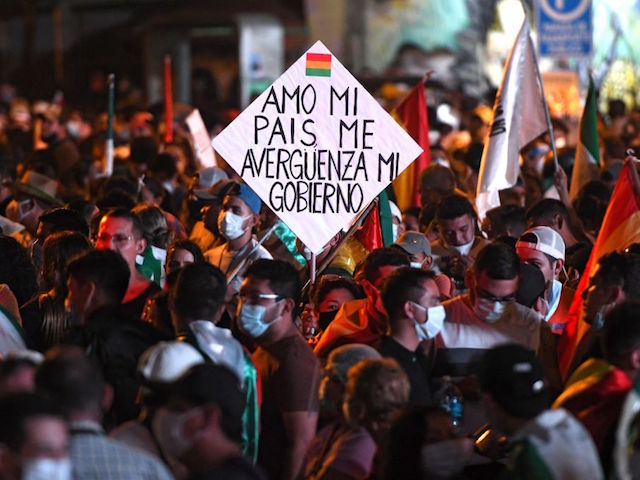 Opponents to the government of Bolivian President Luis Arce protest against the arrest of former interim president Jeanine Anez and her former ministers with a sign reading I love my country. I am ashamed of my government in Santa Cruz, Bolivia, on March 15, 2021. ((RODRIGO URZAGASTI/AFP via Getty)

In reality, Áñez – then a senator – assumed the presidency because the Bolivian constitution demanded it of her following the voluntary departure of socialist leader Evo Morales and all other individuals above Áñez in the line of succession in November 2019. Áñez was the only person eligible to assume the country’s presidency at the time, the Associated Press recalled. Morales fled the country after the Organization of American States (OAS) found significant evidence of fraud and voter intimidation in the presidential election a month before, which Morales ran in despite being constitutionally banned from doing so.

Áñez continued in the role through November 2020 and did not run in the next presidential election as a gesture of goodwill. She was immediately arrested after Luis Arce, the candidate for Morales’ Movement Towards Socialism, won the election, on charges that her ascent to the interim presidency after Morales chose to abandon the country was a form of “coup.”

“Arce then vowed to pursue those he accused of staging a coup,” the news agency recalled in October 2021.

Morales fled Bolivia on November 11, 2020. The action followed weeks of violent protests in Bolivia over Morales’s controversial election to a fourth term in office in October 2020. Bolivian police arrested Áñez on March 13, 2021, for her alleged “coup” involvement.

She was subsequently charged with a wide variety of unsubstantiated allegations such as terrorism, sedition, and conspiracy. Bolivian Attorney-General Juan Lanchipa additionally charged Áñez with genocide in August 2021 “over protesters’ deaths during violence between supporters and opponents of Morales — as well as between protesters and the security forces — that left 37 people dead in November 2019,” according to AFP. At the time, nearly every report of protester violence documented was tied to socialist Morales supporters.

Áñez attempted suicide in prison shortly after she was charged with genocide last summer.