Socialist Brazilian ex-president and current presidential frontrunner Luiz Inácio Lula da Silva is planning to marry his third wife-to-be on May 18 in an “ostentatious” nine-hour bash featuring high-end wines, a buffet with 11 types of cuisines, and a star-studded guest list.

Brazilian journalist Leo Dias revealed in his column on Sunday that the former president, who is currently vying for the top political office in the country once more against incumbent conservative Jair Bolsonaro, spent an estimated 100,000 reais (about $19,700) on wine alone, not counting various cocktails, champagne, and beer.

Dias had previously reported – citing an organization document from the lavish venue, Sao Paulo’s Grupo Bisutti – that Lula’s wedding would feature a lavish feast served as a buffet “with an impressive variety, with at least 11 islands of various gastronomic possibilities: Arabic food, pasta, meat, and a variety of appetizers.”

“Grupo Bisutti has several spaces for weddings, with unique infrastructure for such a special day,” the venue website reads. “The privileged location is another difference, as they are located in the Vila Olímpia region and close to the main churches of São Paulo. For couples who dream of having the ceremony in the same place as the party, the Group has two perfect places for this celebration, in addition to being possible to perform this ritual in all other spaces.”

Lula is running for president under the banner of the far-left Workers’ Party (PT), which he founded, campaigning on promises to relate to and benefit Brazil’s poor and attacks on Bolsonaro for not investing enough in government programs.

Translating Dias’ reporting into Spanish, the Argentine news network Infobae reported that the Brazilian journalist had revealed that Lula had “banned all employees of the luxurious locale to use their mobile phones” out of fear of leaked images or videos and that organizers were planning to erect special fencing to block vehicles not belonging to invited guests from being anywhere near the venue.

Lula served as president of Brazil from 2003 to 2011. His tenure was marked by major expenses in public projects, including infrastructure, a massive government healthcare program, and securing hosting duties for the 2016 Rio de Janeiro Summer Olympics and the 2014 FIFA World Cup. Both sporting events cost millions in public funding and led to widespread protests and police strikes, which in turn drove crime.

Lula was also president during the establishment of a nationwide corruption operation known now by the name of the law enforcement action against it, “Operation Car Wash.” Police found dozens of politicians implicated in the scheme, in which politicians would create public works projects, then sign contracts with private corporations to fulfill them. The government officials would agree to overpay for the projects, costing the Brazilian taxpayers, and the private contractors would kick back some percentage of the excess cash to secure future deals.

Lula da Silva was arrested in April 2018 for allegedly purchasing a luxury beachfront property with Operation Car Wash funds. He was sentenced to 12 years first, then 25 total in prison for corruption, preventing him from participating in the 2018 presidential election that Bolsonaro won. The Brazilian Supreme Court, packed with appointees tied to socialist presidents, freed him in November 2019, annulling the sentence and allowing him to run again. 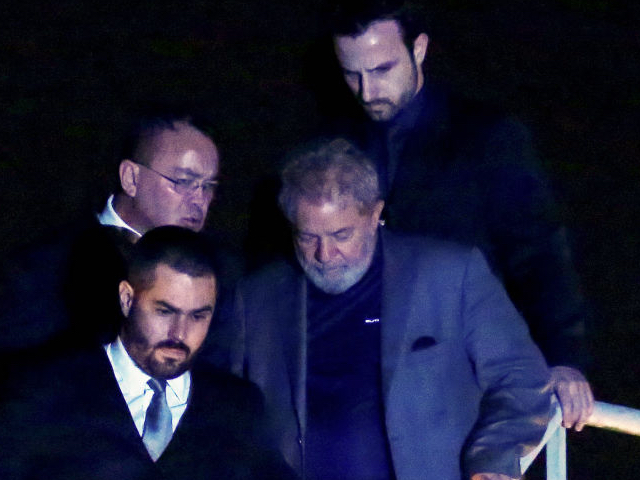 One of Lula’s first announcements minutes after leaving prison was confirming his relationship with Rosângela “Janja” da Silva (no relation), a 55-year-old sociologist (Lula is currently 76 years old).

“I achieved the feat of romancing a girlfriend while in prison,” Lula boasted to a crowd of supporters upon leaving jail, introducing Janja.

A friend of Lula’s, economist Luiz Carlos Bresser-Pereira, had told reporters after visiting the former president in prison in May 2019 that Lula was “in love and his first project when he gets out of prison is to get married.” The Brazilian newspaper Estadao reported in 2021 that Lula and Janja began their romance in 2017, the year Lula’s second wife Marisa Letícia Lula da Silva died.

Lula most recently mentioned his upcoming nuptials in a conversation with left-wing American publication Time magazine, proclaiming, “When you lose your wife, you think, well, my life has no more meaning. Then suddenly this person appears who makes you feel like you want to live again. I’m in love as if I were 20 years old, as if it were my first girlfriend.”

The Time interview alarmed some former Lula supporters in the international leftist community, as he took the opportunity to condemn Ukrainian President Volodymyr Zelensky and blame him for Russia’s ongoing war against his country – an unpopular position on the modern left, though Russian strongman Vladimir Putin funds some of the most oppressive left-wing regimes in Latin America.

At home, Lula maintains a dwindling lead against Bolsonaro. Once thought to have the ability to defeat the conservative Bolsonaro in a landslide, the latest polls show Lula with, at most, a seven-point lead. Lula’s campaign team has expressed, albeit anonymously, concerns that Bolsonaro’s political team is especially adept at using social media to galvanize voters. Social media played a negligible role in Lula’s 2003 presidential win.

Bolsonaro has gained significant ground campaigning on family values and faith issues, aiding the economy and opposing coronavirus-related civil rights restrictions and free speech, attacking the Lula-friendly Supreme Court for using its power to arrest Brazilians, including a lawmaker, for political opinions posted on social media.