The Ministry of Health of Brazil announced on Sunday that it would officially end the public health emergency in the country caused by the Chinese coronavirus pandemic – the same day World Health Organization (W.H.O.) Director-General Tedros Adhanom Ghebreyesus insisted that the pandemic was nowhere near ending.

Brazil announced a public health emergency shortly after the W.H.O. officially decreed the global spread of Chinese coronavirus a pandemic in March 2020; the W.H.O. has faced international criticism for making the move so late, especially following the revelation that the government of Taiwan had attempted to alert the U.N. agency of a contagious respiratory disease spreading in Wuhan, China, in late 2019. The W.H.O. “mostly ignored” the warning, the Taiwanese government told Breitbart News at the time.

As the largest country in South America and one with deep business ties with China, Brazil has been one of the most severely affected countries in the world by the pandemic, documenting nearly 31 million cases and 665,000 deaths since the pandemic began. Brazilian health officials have confirmed slightly under 500,000 cases in the past month. Conservative President Jair Bolsonaro, while greenlighting the emergency declaration, has received years of international condemnation for opposing “lockdown” mass house arrest and business shutdown policies and urging Brazilians to carry on as normally as possible for much of the pandemic.

Bolsonaro has repeatedly insisted in the past month while campaigning that he was the “only head of state” to oppose lockdown policies and that Brazil’s economic health outside of states where governors imposed lockdowns are evidence of his wisdom in doing so. Brazilians will go to the polls in October. Bolsonaro is seeking re-election against far-left ex-President Luiz Inácio Lula da Silva, recently released from prison after being convicted of corruption during his first stint in office.

“Given the easing epidemiological situation and the advance of the vaccination campaign, this Sunday (22), the Public Health Emergency of National Significance (ESPIN), caused by the [Chinese coronavirus] pandemic, came to an end,” an official decree by the Ministry of Health, published on Sunday, reads. The Ministry, it explained, had ordered an end to the emergency declaration in April, but gave local and regional governments one month to adjust to the return to normal.

The Ministry of Health clarified that an end to the emergency declaration did not rescind Emergency Use Authorizations granted to various coronavirus vaccine products currently used in the government’s national campaign. Corporations manufacturing vaccine candidates and other products related to the pandemic have received a one-year Emergency Use Authorization extension before having to properly apply to the governing health agency for approval of their products.

In the immediate aftermath of the end of the emergency, the Ministry added, the most immediate changes would be an end to mask mandates in airports and airplanes and the return of food service to flights. 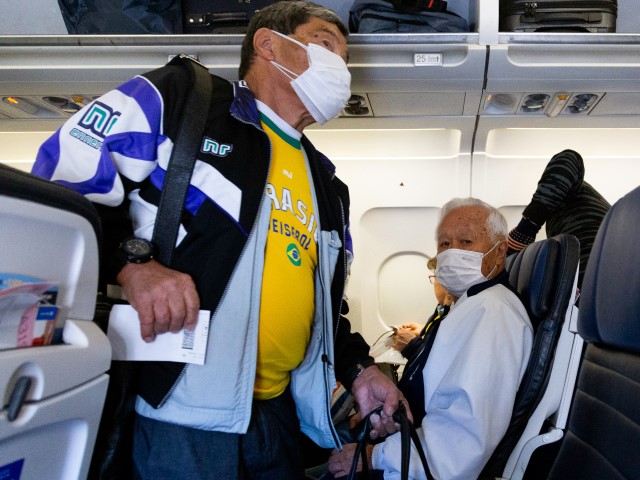 Passengers wear protective face masks in a airplane before take-off at the Phoenix International Airport on March 14, 2020 in Phoenix, Arizona. The man in the aisle is wearing a Brazilian jersey. (Carol Coelho/Getty Images)

Brazil appeared to be moving towards easing coronavirus restrictions early in the year with the resumption of Carnaval, the annual festival that precedes the Catholic Lenten period that many consider to be among Brazil’s most important cultural hallmarks. Reserved local festivals had occurred for the past two years but without the large throngs of tourists and revelers in colorful costumes that mark the occasion.

The end of the public health emergency in Brazil was announced on the same day that W.H.O. chief Tedros, who is not a medical doctor, implored the world not to stop treating the pandemic as a priority.

“So, is it COVID-19 over? No, it’s most certainly not over,” Tedros said during the opening remarks at the annual World Health Assembly, using the “stigma-free” name for Chinese coronavirus that the W.H.O. has imposed on the world. “I know that’s not the message you want to hear, and it’s definitely not the message I want to deliver.”

Tedros lamented that “testing rates have plummeted” so even documented increases of cases in some parts of the world are likely much smaller than reported.

“It’s not over anywhere until it’s over everywhere,” Tedros insisted. 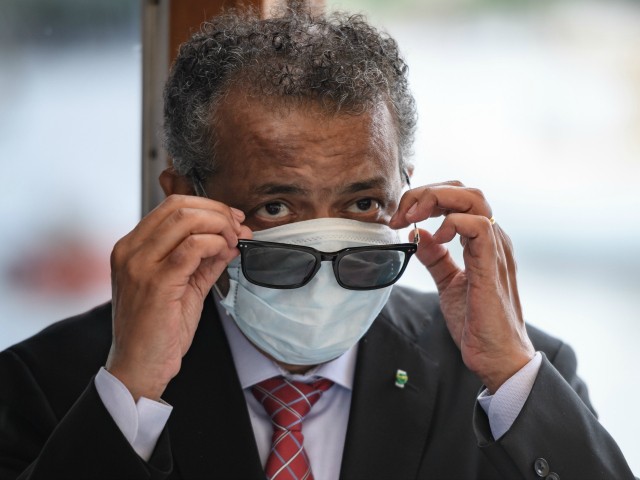 Bolsonaro’s Minister of Health, Marcelo Queiroga, is in Geneva for the World Health Assembly. He spoke at a panel about international rates of heart disease on Monday, asserting that his government’s current priority is to reduce the factors that elevate risk of heart diseases and other conditions – such as smoking, lack of exercise, diabetes, and hypertension.

Tedros is expected to make a bid, for the second year in a row, to greatly expand the W.H.O.’s power. The W.H.O. did little in the early days of the pandemic to limit the spread of Chinese coronavirus out of Wuhan and has been consistently unable to challenge the Chinese Communist Party – from failing to put together a competent investigation into the origins of the disease to triggering outrage from the communists for lightly disagreeing with their ongoing mass lockdowns of civilians. W.H.O. supporters and Tedros himself have consistently promoted the possibility of a “global pandemic treaty” to empower it to fight through bureaucracy and stonewalling during the next outbreak.

“The ongoing chaos of this pandemic only underlines why the world needs an ironclad global agreement to set the rules of the game for pandemic preparedness and response,” Tedros said last year prior to the World Health Assembly. “The world has treaties to manage other threats. Surely countries can agree on the need for a binding pact on the threat of pandemics.”

Experts believe nearly every world power is opposed to such a treaty, which would likely cause significant sovereignty problems if, for example, the W.H.O. declares a pandemic occurring in a country without the consultation of its government. As no text for a “global pandemic treaty” currently exists, many observers have expressed concern regarding its potential content.

Bolsonaro has been among the loudest voices against such a treaty. At a campaign stop on May 15, Bolsonaro indicated that he believed a global pandemic treaty would make it impossible for him to prevent the W.H.O. from imposing lockdowns in his own country, over his government.

“You know why?” he asked. “Because I was the only head of state in the world that did not adhere to the lockdown trend. I said we had to take care of seniors and people with comorbidities and today, studies, especially those outside of Brazil, show that I was right.”

Brazil did endure lockdowns because it is governed under a federalist system, so individual governors could impose emergency policies even as the president disagreed – a point Bolsonaro emphasized.

“What was the state that locked down the most in Brazil? Sao Paulo. Which state had the most people die per 100,000? It was Sao Paulo. That’s a sign I was right,” the president said.

While the circumstances at the World Health Assembly do not appear to be ripe for the passing of a pandemic health treaty this year, the countries convened are expected to discuss an amendment to the agency’s International Health Regulations (IHR) presented by the administration of President Joe Biden that would allow the W.H.O. to declare outbreaks in countries without having to “consult with and attempt to obtain verification from the State Party in whose territory the event is allegedly occurring.” As the IHR already exist as international law – as opposed to a theoretical pandemic treaty – and the amendment will be part of W.H.O. state discussions, the potential sovereignty issues it presents are more acute than those of the hypothetical treaty.