Brazil’s Federal Police requested authorization from the nation’s Federal Supreme Court this week to formally indict President Jair Bolsonaro with a Chinese coronavirus-related crime, accusing Bolsonaro of having disseminated false information about coronavirus vaccines and for discouraging the use of masks.

The charges come as Brazil officially opens its presidential campaign season this week, in which Bolsonaro is campaigning by heavily promoting his opposition to coronavirus lockdowns and emphasis on protecting people’s livelihoods.

The coronavirus crime accusations follow an investigation opened at the request of Brazilian Senator Omar Aziz, who presided over the senate’s “COVID-CPI,” a legislative commission that sought to investigate allegations of irregularities committed by Brazil’s federal government in the handling of the Chinese coronavirus pandemic.

The commission was created in April 2021 and concluded its work in October of that year, recommending nine criminal charges against Bolsonaro for his handling of the coronavirus pandemic and accusing him of having committed “crimes against humanity.”

Five of the nine charges were shelved by Brazil’s prosecutors on July 27.

Brazilian President Jair Bolsonaro once again blasted the global “hysteria” over the Chinese coronavirus in a public address Tuesday, urging his people to get back to normal life and work as soon as they possibly can. https://t.co/mzq7st1BXh

The Brazilian Police’s accusations against Bolsonaro are centered around a video that Bolsonaro posted on social media in October in which he allegedly claimed that there was a link between coronavirus vaccines and a risk of developing AIDS. The video was taken down by both Facebook and YouTube shortly after it was initially published, with YouTube issuing a temporary suspension on Bolsonaro’s account.

On October 27, Bolsonaro gave an interview to Brazil’s Joven Pan News, where he argued that he did not make up a link between Coronavirus vaccines and AIDS but, rather, that he was quoting information published by the website Exame Magazine.

“I showed an article from Exame magazine. I didn’t invent it,” Bolsonaro said.

After Bolsonaro’s video was taken down, Exame, which Bolsonaro said he quoted the information from, updated the post clarifying that there is no proof of the relationship between Coronavirus vaccines and AIDS.

According to Brazil’s O Globo newspaper, federal police consider that Bolsonaro’s words incited viewers to not comply with Brazil’s health norms pertaining coronavirus vaccination and, as such, fits the elements of the criminal misdemeanor of “causing alarm to third parties, announcing non-existent danger,” for which the South American nation’s penal code stipulates a prison sentence of three to six months, or the imposition of a fine.

The police report, which O Globo cites, also accuses Bolsonaro of having discouraged the use of masks against coronavirus in the now-deleted October 2021 video, where, according to the report, Bolsonaro allegedly claimed that the use of masks had been responsible for many of the deaths that occurred during the 1918 Spanish flu pandemic.

As Bolsonaro’s social media accounts removed the videos in the immediate aftermath of police challenging his statements, they are not available at press time.

Breitbart News could not find a transcript of the comments, as Brazilian police are treating their dissemination as a crime. 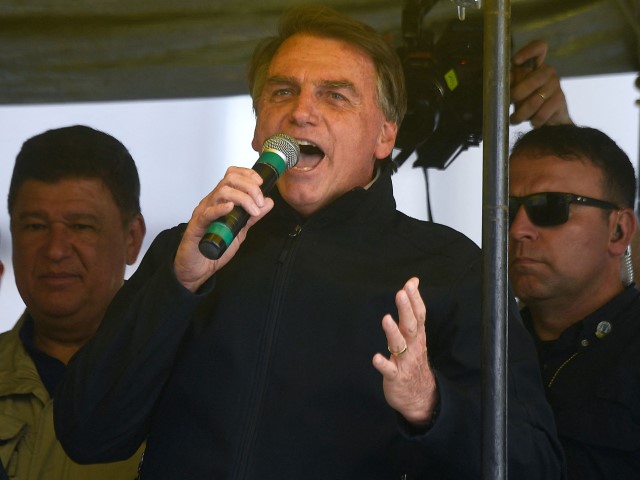 A copy of the police report published by the Brazilian news website Poder360 on Wednesday reads:

Bolsonaro, who has been reluctant to wear masks in public, was ordered by a Brazilian federal judge to wear a mask in public in June 2020; the court ruling was dismissed one week later. The president repeatedly violated the national mask mandate, receiving fines for failing to cover his face.

The federal police’s request also asks for permission to depose Bolsonaro to continue the investigation process. Bolsonaro refused to publicly comment on the matter on Wednesday.

The police’s motion against Bolsonaro was carried out one day after Bolsonaro launched his presidential reelection campaign for the upcoming October 2 elections. Bolsonaro is one of the election’s frontrunners alongside socialist ex-president Luiz Inácio Lula da Silva, who was allowed to run for president again after Brazil’s Supreme Court overturned the multiple convictions on charges of corruption against Lula in 2021.

Brazil’s Supreme Court has not responded to the police’s request as of the time of publishing.