Cuba’s figurehead “president” Miguel Díaz-Canel landed in China on Thursday, meeting with dictator Xi Jinping in Beijing on Friday to discuss cooperation between socialist countries, economic development, and their mutual distaste for America.

Díaz-Canel, who is subordinate to the ruling communist Castro family, landed in Beijing following stops in Algeria, Turkey, and Russia, the latter of which he used to encourage Russian companies to invest in his artificially impoverished nation. 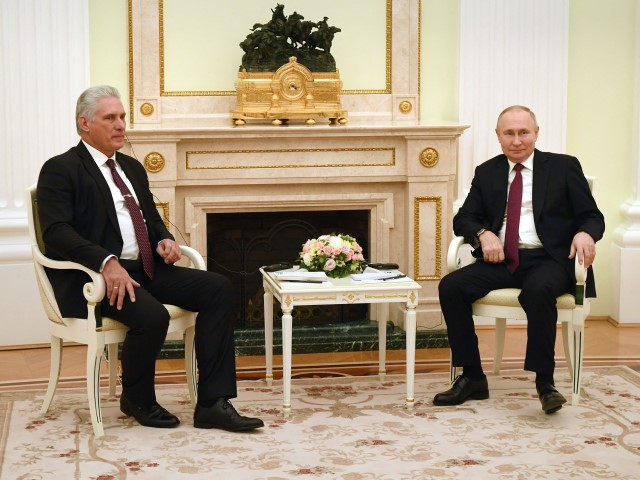 Cuba is currently facing what has now become a nearly two-year-old civil uprising that began on July 11, 2021, when an estimated 187,000 people around the country joined protests calling for the end of communism. At its peak this year, the Cuban resistance organized as many as 11 protests a day in August, long after international attention on the anti-communist movement faded. Protests have been exacerbated by the Communist Party’s violent repression of political dissidents, including the mass imprisonment of children, and various devastating events, such as the passage of Hurricane Ian, which left the entire island without electricity, and a massive fire at a fuel depot in northern Matanzas in August. 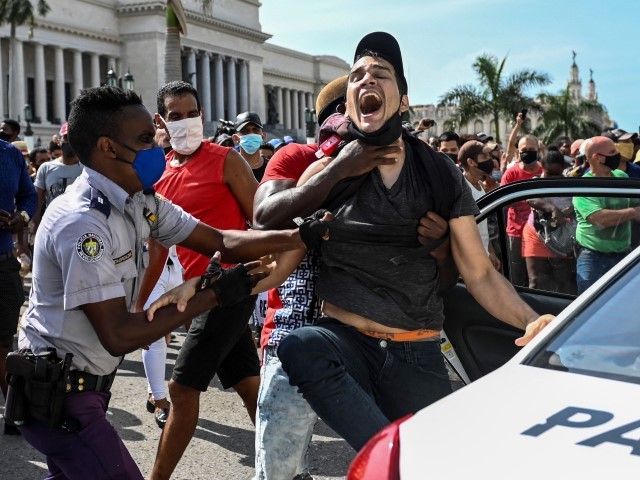 A man is arrested during a demonstration against the government of Cuban President Miguel Diaz-Canel in Havana, on July 11, 2021. Thousands of Cubans took part in rare protests Sunday against the communist government, marching through a town chanting “Down with the dictatorship” and “We want liberty.” (YAMIL LAGE/AFP via Getty Images)

The Castro regime will be celebrating 64 years of totalitarian control of the nation in January. It continued to blame minor economic limitations imposed on U.S. companies by the American government for the entirety of its economic and humanitarian woes.

At 90 miles’ distance from America, Cuba offers China easy access to the Western Hemisphere for geopolitical and economic benefits. Cuba is a member of China’s Belt and Road Initiative (BRI), a debt-trap plan in which China offers poor countries predatory loans to later erode their sovereignty, and some reports have indicated that Chinese security agents have trained Cuban counterparts in how to repress public dissent.

Cuba is also a loyal partner of China’s on the world stage, voting in China’s best interests at the United Nations by helping tank any attempts to investigate or condemn China’s ongoing genocide against Muslim-majority communities in occupied East Turkistan.

China’s Xinhua News Agency confirmed on Friday that Díaz-Canel met with Xi Jinping, the first Latin American leader to receive an audience in the Chinese capital since October’s Chinese Communist Party Congress. Like Cuba, China has faced a growing, incessant wave of civil unrest that marred the Congress, an event held every five years to cement Xi’s stranglehold on power, with peaceful protests against the national ideology.

“Cuba is the first country in the Western Hemisphere that established diplomatic relations with the People’s Republic of China,” Xi reportedly said, according to Xinhua, in his meeting with Díaz-Canel. “Our ties have become an example of solidarity and cooperation between socialist countries, as well as an example of sincere mutual assistance between developing countries.”

Xinhua emphasized that Xi promised to support the Cuban Communist Party’s campaign against America, without naming the country itself.

“Xi said China will continue to firmly support Cuba in defending its national sovereignty and opposing external interference and blockade,” the state news agency noted, a reference to America’s weak “embargo” on the island and unsubstantiated allegations by the Castro regime that protesters are “mercenaries” somehow paid by the U.S. government or its allies. Xi also used the opportunity, the report concluded, to press Díaz-Canel to support China’s “Global Security Initiative,” a vague plan Xi debuted in April that would effectively disable countries’ abilities to unilaterally use their militaries to defend themselves.

Chinese Foreign Ministry spokeswoman Hua Chunying shared photos of Friday of Xi and Díaz-Canel being greeted by Chinese soldiers and meeting alongside their respective partners. Like Xinhua’s coverage of the meeting, Hua’s remarks omitted any details regarding the results of the conversation, any particular economic or political agreements in discussion, or other concrete items.

“The [Chinese Communist Party] and the [Cuban Communist Party] should expand communication, exchanges, and mutual learning, aiming to construct socialism well, conforming to their respective national conditions,” Hua said in a statement accompanying a photo of the two leaders on Twitter, a social media platform most Chinese citizens cannot legally use.

The Chinese Foreign Ministry did not address the visit in its regular briefing on Friday, according to the English-language transcript of the briefing the Chinese government posted to the ministry’s site.

The official newspaper of the Cuban Communist Party, Granma, noted in its coverage of the visit that it occurred at China’s invitation.

“For us it is an honor to be invited as the first country in Latin America to visit China after the successful celebration of the twentieth Congress,” Díaz-Canel reportedly said upon arriving.

The figurehead leader posted a photo of himself walking out of his airplane in Beijing, shaking hands with masked Chinese officials while the Cuban official was apparently exempt from China’s totalitarian coronavirus protocol.

“We come in response to an invitation from the esteemed President Xi Jinping, a great friend of Cuba,” Díaz-Canel wrote on his account. “Intense, productive, and surely thrilling hours await.”

Granma emphasized “friendship” and ideological ties in its coverage of the meeting, suggesting that Díaz-Canel had traveled across the world seeking to reaffirm “solidarity” between communists, not to benefit Cuba in any way.

“Cuba and China today constitute reference points – although each country does it within their own characteristics – regarding the construction of socialism,” Granma claimed. “Between both nations there is a will that definitively and firmly unites them: contrary to the most complex international contexts both have cultivated and defended friendship, and throughout over 60 years they have known how to construct deep nexuses of cooperation in various spheres.”

Granma held up alleged cooperation in “biotechnology” as an example, but did not state that Díaz-Canel would seek to expand any known agreements in that field between Beijing and Havana.

Díaz-Canel is nonetheless expected to seek some financial agreements with the world’s second-largest economy, particularly give the dire situation that his regime has created on the island. The Chinese state propaganda outlet Global Times noted in an infographic on the meeting that China is Cuba’s largest trade partner and the two expanded their trade volume last year by 7.2 percent. China claims that Cuba is its second-largest trade partner in the Caribbean, despite Cuba not having any significant exports.

China’s ambassador to the island, Ma Hui, suggested economics was at the top of the list of concerns in Díaz-Canel’s visit in remarks to Xinhua published on Thursday, as the symbolic leader arrived in Beijing.

“The two countries have seen expanded cooperation and exchanges in sectors including energy, agriculture, bio-pharmaceuticals, science and technology, education and culture,” Xinhua paraphrased the diplomat as saying. “Bilateral trade is also expanding, Ma said, adding that Cuban exports of rum, honey and sea products continue to gain ground in the Chinese market.”