The overseas tax rates facing U.S. multinational tech-companies are at least 25 percent lower than what the companies pay domestically, according to a new report from WalletHub.

The tech companies, including Apple, Cisco Systems and Google, pay lower overseas tax rates than their non-tech U.S. peers, such as Boeing or Johnson & Johnson, says WalletHub, which is a personal finance website launched by Evolution Finance for consumers.

The site developed ‘The S&P 100 Tax Rate Report’ to help customers understand the impact of corporate taxation what is a reasonable tax burden corporations should bear.

WH found a wide differential between the highest and lowest state, federal, and international tax rates paid by the Standard & Poor’s list of 100 major companies, as disclosed in their 2014 annual reports versus the prior year.

Lead analyst Jill Gonzalez commented that, “The one method that a lot of multinational corporations are using to pay lower, total taxes is offshore transfer payments.” She added, “That’s done especially by these tech companies by creating foreign subsidiaries to make raw materials or parts in countries with low tax rates.” 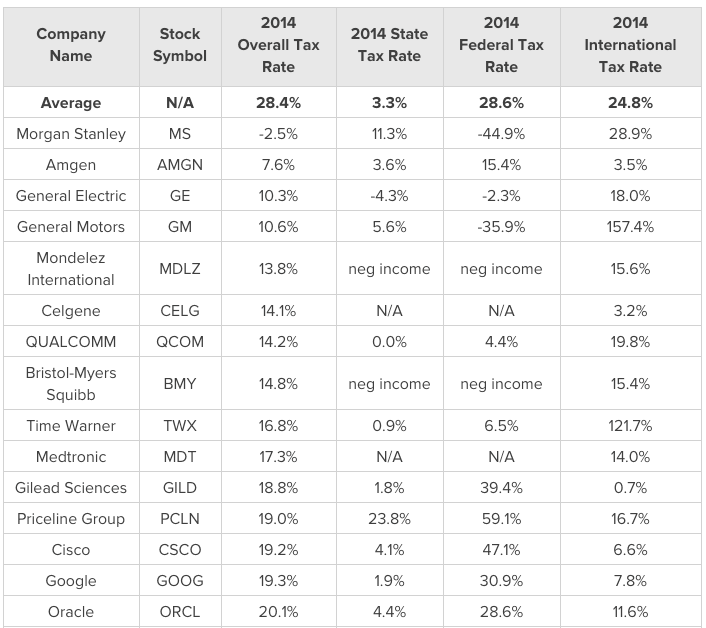 It’s no secret that the U.S. has the highest corporate taxation rate among developed nations, so it should come as no surprise that companies seek tax havens abroad in countries. For example, Ireland has attracted investment by lowering the combined corporate tax rate to 12.5 percent. That’s one-third the unmodified rate of 39.1 percent paid by companies in the United States.

The WalletHub report highlights that one major advantage of being a multinational corporation is the ability to choose where and when to pay taxes on profits earned by the company or its subsidiaries firms.

The lowest taxpayers on the list all had substantial offshore operation, including Allergan, Amgen, General Electric, General Motors and Mondelez International. Morgan Stanley ranked as the only company paying no taxes, but that was due to suffering losses in prior years.

After the analysis, Ms. Gonzalez concluded that most American “companies are paying more than their fair share of taxes.” She believes that the United States’ tax rate is too high and that our system of double taxing foreign profits when they are repatriated home explains why American companies keep $2.1 trillion in foreign profits offshore.