TEL AVIV – The parents of a Palestinian terrorist who stabbed and murdered two rabbis in Jerusalem last week made a “pilgrimage” to the site of the attack, with the terrorist’s mother posing for a photograph while making the victory gesture.

Muhammed Halabi is credited with kicking off the latest wave of Palestinian terror attacks when he stabbed two rabbis and a child, killing the men, in Jerusalem’s Old City last October. Israeli daily Israel Hayom reported on June 16 that Halabi’s parents paid respects to their son, who was killed by Israeli security forces at the scene of the attack, by visiting the place where he carried out his deadly act of terror.

A photograph of his mother with both hands making a “V” sign was posted on Facebook. See below: 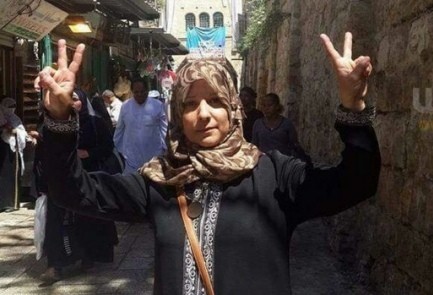 Halabi has been honored numerous times by Palestinian society.

Al-Quds University in the West Bank, where Halabi was a student of law, held a special event in his honor in which the parents of the dead terrorist were handed his diploma. The Palestinian Bar Association, which is funded by the European Union and the United Nations, announced that it would grant Halabi his law degree posthumously. The head of the association also visited the family’s home to deliver condolences on behalf of the legal community.

The Palestinian Authority also named a road after Halabi, with one official saying at a rally in his honor that he “represents an example and role model for generations of young.”

Breitbart Jerusalem reported that a football tournament in Ramallah was named after him as well as another PA- and Fatah-sponsored sporting contest called the “Martyr Muhammad Al-Halabi Table Tennis Tournament.” The terrorist also had a youth center erected in his name in the West Bank town of Jenin.

Around Christmastime, the Fatah student movement at Birzeit University got into the holiday spirit by placing a Christmas tree on campus festooned with images of terrorists including Halabi. It was the second such tree at Palestinian universities.

Halabi’s family home, which was demolished by the IDF in accordance with Israel’s policy of deterrence, had a memorial erected nearby by the PA featuring Halabi’s name and picture atop a map of Israel with the words “Greater Palestine” written on it.

Various Palestinian groups have been raising funds to rebuild the family’s home. It was decided that the family deserved significantly upgraded living quarters in a neighboring village, with the new space spanning about 3,870 square feet and currently undergoing renovations.

Maor Zemach, who heads the organization Lach Yerushalayim, called upon Defense Minister Avigdor Liberman to do more towards deterring the families of terrorists from glorifying violence.

“It is just unacceptable that families of terrorist travel freely in Jerusalem and commemorate the murders perpetrated by their sons as if these attacks were acts of heroism,” Zemach said.

I ask that the new defense minister make the right decision and make sure families of terrorists who are not residents of Israel are denied access to the heart of Jerusalem. This will send a message that Israel will not tolerate any incitement propagated by family members and will not allow their sons to become heroes.