TEL AVIV – In its obituary for former prime minister Shimon Peres, The New York Times decided to rewrite the history of the Second Intifada, blaming then-opposition leader Ariel Sharon for kicking off the wave of terrorist attacks by visiting the Temple Mount.

Media watchdog HonestReporting.com, which first reported the misinformation, noted that blaming the outbreak of the Intifada on Sharon’s September 2000 visit to Temple Mount is “one of the most pervasive myths appearing in the international media.” 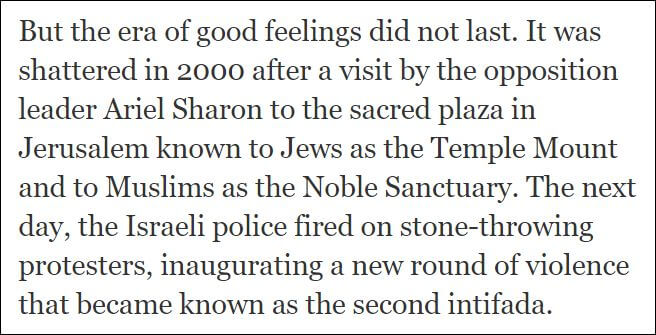 Interestingly, the term “shattered” was omitted from an updated version and more details were added about prime minister Yitzhak Rabin’s assassination and Peres’ defeat by Benjamin Netanyahu in the 1996 elections.

The NYT failed to acknowledge the changes in the updated article.

Either way, the crux of the argument remains the same. The new paragraph still includes the correlation between Sharon’s visit and the outbreak of violence, stating:

“Conflict between Israel and the Palestinians accelerated in 2000 after a visit by the opposition leader Ariel Sharon to the sacred plaza in Jerusalem known to Jews as the Temple Mount and to Muslims as the Noble Sanctuary.”

However, as HonestReporting.com notes, Palestinians themselves do not think that Sharon was the instigator of the Second Intifada.

Whoever thinks that the Intifada broke out because of the despised Sharon’s visit to the Al-Aqsa Mosque is wrong. That was only the straw breaking the Palestinian people’s patience. This Intifada was planned in advance, ever since President [Yasser] Arafat’s return from the Camp David negotiations, where he turned the table upside down on President [Bill] Clinton.

On the personal level, I miss him very, very much. [Our daughter] Zahwa also misses him, you can’t imagine. She didn’t know him. She knows that Arafat sent us away before the [Israeli] invasion of Ramallah. He said: “You have to leave Palestine, because I want to carry out an Intifada, and I’m not prepared to shield myself behind my wife and little girl.” Everyone said: “Suha abandoned him,” but I didn’t abandon him. He ordered me to leave him because he had already decided to carry out an Intifada after the Oslo Accords and after the failure of Camp David [in July 2000].

American diplomat Dennis Ross recounts how Israel had called on Washington to warn them that they had evidence the Palestinians were “planning massive, violent demonstrations throughout the West Bank and the next morning, ostensibly a response to the Sharon visit.”

Washington subsequently urged Arafat to stem the violence, but the Palestinian leader, according to Ross – “did not lift a finger to stop the demonstrations, which produced the Second Intifada.”

In addition, the Mitchell Report investigating the Intifada, which was submitted to then-president George W. Bush, found categorically that “The Sharon visit did not cause the Al-Aqsa Intifada.”