Photos released by the Islamic State group purport to show that its jihadists are again using small unmanned drones to attack targets in the area of Mosul where IS is in the midst of a battle with the Iraqi army.

The use of drones was allegedly renewed after about a month during which the group avoided deploying them in combat. In the photos released by ISIS on the group’s Telegram account, its small unmanned aircraft can be seen attacking Shi’ite militia targets on the outskirts of Mosul (above and below). 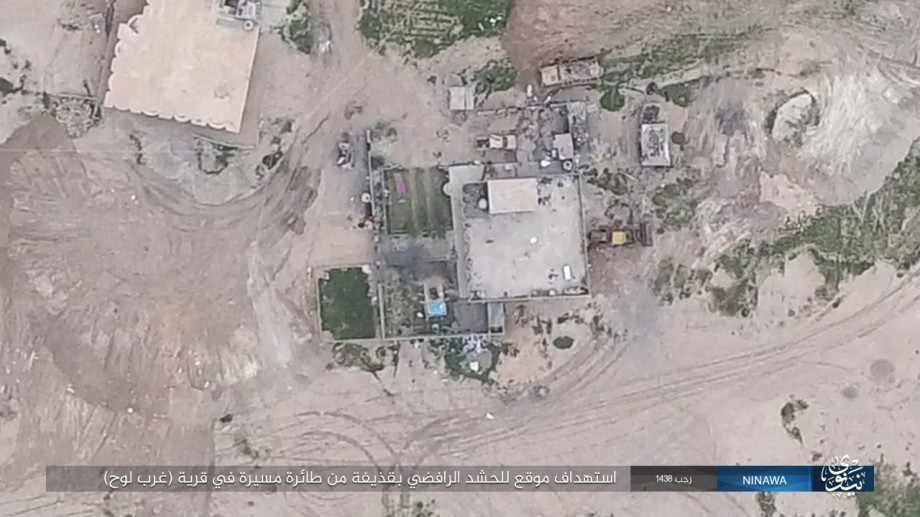 The redeployment of IS drones comes as the group finds itself being pushed back toward the Old City of Mosul, a zone without many open areas where the aircraft can operate.

Meanwhile, reports circulated on Iraqi social media citing Shi’ite activists saying the U.S. has supplied the Iraqi army with equipment designed to neutralize and disrupt the use of IS drones.

In February, the Iraqi army claimed that it had raided a drone factory near Mosul.

The Islamic State is taking to the skies as the fight for Mosul wears on. Over the past several weeks, the extremist group has been flaunting its use of unmanned aerial vehicles against Iraqi army and Kurdish forces in and around the city. Propaganda videos feature dramatic aerial footage of the precision attacks, and they have produced their intended effect, receiving heavy coverage in mainstream media outlets. So far, the Islamic State has deployed this technique only in Iraq and Syria.

That’s likely soon to change, though, considering the attention the group’s drone attacks have been getting and the prevalence of drones in the West. Drone attacks are coming. But they do not necessarily portend death from above.

For the past decade, unmanned aerial vehicles have been a cornerstone of America’s campaign against Islamic insurgents in the Greater Middle East. Predator and Reaper drones crisscross the globe firing Hellfire missiles on U.S. enemies. Other countries have operational drone fleets, but few match the might and ubiquity of America’s.

But journalists on the front lines in Iraq have seen a disturbing new trend – Islamic State using retail quadcopters to drop their own munitions with surprising accuracy. Mosul is the frontline in the fight against ISIS as well as the frontline in a new arm’s race. One that pits the tiny drones of the Islamic State against the budding anti-drone technology of the West.

To be clear, Islamic State’s commercial quadcopters rigged with grenades and manufactured missiles is nothing compared to the power of a Predator firing off Hellfire missiles with pinpoint accuracy. But that’s cold comfort to a civilian killed by a handmade explosive dropped by a quadcopter over the streets of Mosul.