The banner was hung at a reception for new students at the Dura branch of Al Quds University and featured photos of the founders of a number of terror groups, including Hamas’s Ahmed Yassin, Palestinian Islamic Jihad’s Fathi Shiqaqi, Abu Ali Mustafa of the Popular Front for the Liberation of Palestine and Black September’s Salah Khalaf, monitoring group Palestinian Media Watch reported.

The banner also featured images of former Palestinian Liberation Organization head Yasser Arafat and his deputy Abu Jihad, who as head of the organization’s military wing orchestrated terror attacks that claimed the life of at least 125 Israelis, the Palestinian Authority daily Al-Ayyam reported.

Speakers at the reception included Fatah official Jamal Muhaisen, who has delegitimized Israel’s right to exist and supported the use of terror in order to defend sites that are holy to Islam.

The Al Quds banner also featured the logo of the university’s branch of Fatah’s student movement with the slogan: “From the sea of blood of the Martyrs (Shahids) we will create a state,” as well as a PA map presenting all of sovereign Israel as “Palestine.” 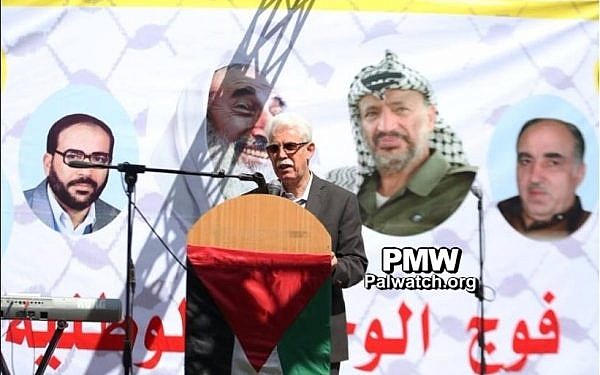