OXON HILL, MD — Panelists at the annual Conservative Political Action Conference (CPAC) attempted to disband some of the biggest misconceptions that many Americans have about the Israeli-Palestinian conflict on Thursday.

“What’s happening today is the result of the British and the French rewiring the Middle East history in the 20th century and about 100 years of Arab rejectionism,” Aylana Meisel of the Tikvah Fund said.

The panel was moderated by Genevieve Wood of the Heritage Foundation. Yehoshua Oz of the Jerusalem Institute for Strategic Studies was also on the panel.

“There has never been a state of Palestine or a country of Palestine,” Meisel said. “The terms Palestine comes from when the Romans were controlling the area and occupying the area.”

She continued, “There has never been a nationality called Palestine,” adding that the name was created as a larger tactic in the Arab world’s war on Israel. 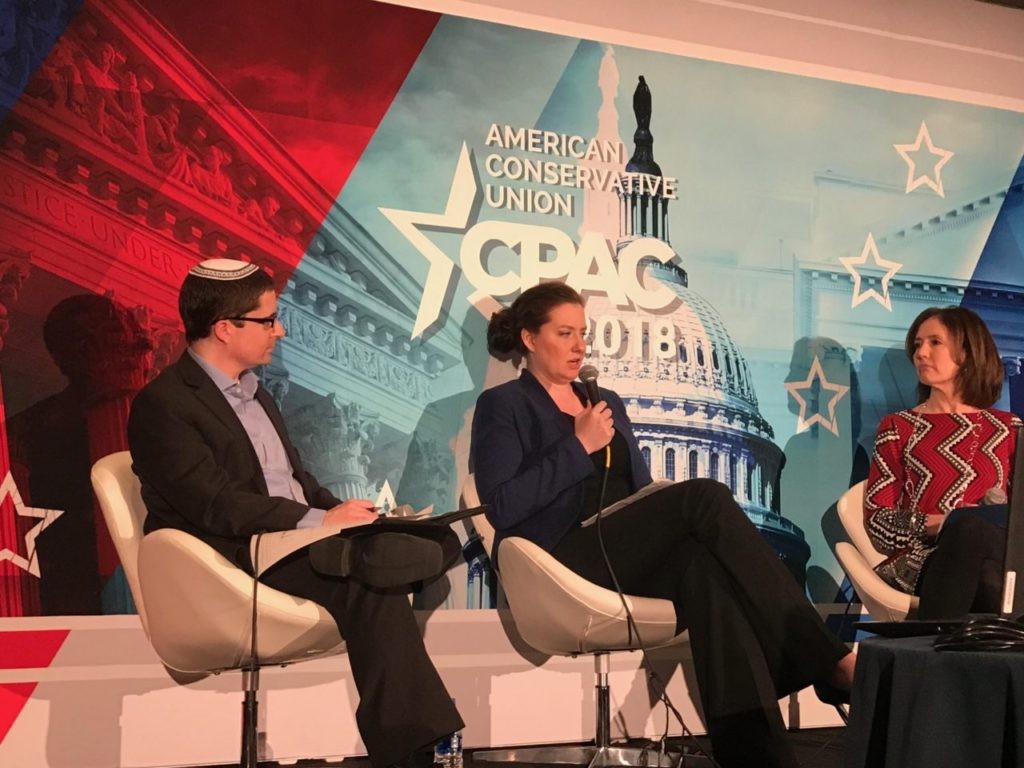 She said the Palestinian issue started to rise in the 1960s, and it was in response to the Jewish presence.

Oz focused on a few central ideas to provide the context in which Israel should be regarded, saying, “it’s all about context,” as he pointed to two maps on a projector screen.

He said the first concept is about who has a right to the land of Israel. “I would argue that Israel has a right to this land, which the people, and I think their connection, is indisputable.” He added, “it’s very clear that the Jews have a long-standing connection to the land, and this extends into the legal realm and historic realm.”

“There are 193 member nations in the U.N. and only one nation has had its right to exist questioned on such a regular basis,” he said of the U.N. attitude toward Israel. Contrary to the news media’s portrayal of the Jewish state, “Israel is projecting power and stability in a region where there is very little,” Oz said.

Meisel noted that, during the mid-19th century, an “economic boom” was triggered by an influx of new Jewish immigrants, which resulted in many Arabs moving in too. She said the Palestinian’s “refugee status is hereditary. It’s the only population in the entire world that falls under this classification.”

Oz, who resides in Israel, spoke of what life is like there on a daily basis.

“Most times, we don’t feel it on a daily basis. Life goes on. The overall security situation in Israel is very good,” he said. However, he noted that, “in the last year, there were about 37 rockets that were shot from the Gaza Strip into Israel.”

He said Israelis have mere seconds to run for shelter when this happens. “That’s one phenomenon that Israelis have in the back of their minds. I think that’s happened roughly 20 times in the past month or so,” he said of the rocket attacks.

“Israel plays an important role, especially for Jews and of course for Christians,” Meisel said. At a time when Christians are being persecuted in the Middle East, Israel has served as a beacon of hope for them.

Quoting Martin Luther King Jr., Oz said, “injustice anywhere is justice everywhere.” To that, he added, “I believe that Israel is a just cause and if you don’t stand up for it, there are repercussions.”