WASHINGTON, DC — Israeli and American leaders from the Jewish and Christian communities spoke at a packed event on Monday at the historic Sixth and I Synagogue in downtown D.C. which focused on combating the de-legitimization of Israel through the embrace of Judea and Samaria.

Yishai Fleisher, the international spokesman for the Jewish community in Hebron, was the master of ceremonies for the event, which featured products that are affected by the boycott, divestment, and sanctions (BDS) movement including dates from the Jordan Valley, halva from Ariel, wines from Psagot and Shiloh, Carni Eldad’s book “Yesha is Fun,” and Saboneto soaps and Argon oil. Partners for the event included the Jordan Valley Regional Council, Yesha Council, Binyamin Regional Council, Hebron, Ariel University, One Israel Fund, Christian Friends of Israeli Communities, Judea and Samaria Chamber of Commerce, and of course the Ministry of Strategic Affairs.

“The time has come to embrace the 650,00 people who live in Judea and Samaria,” Fleisher said. “The time has come to find an alternative to the two-state solution … we are not going to give away our land anymore. We don’t believe in land for peace. It’s been tested and it’s failed.”

Rabbi Shmuley Boteach gave a passionate speech. He said he would not accept that the Jewish people should “forfeit their ancient inheritance which defines their national identity and allows them to be a great light unto the nations. My God! My God! Do we really want for our Palestinian brothers and sisters the forfeiture of Yehuda and Shomron so that a Hamas government can be elected and innocent Palestinian girls who have a boyfriend will be put to death by their brothers, or by their cousins, for the sin of falling in love?”

Boteach continued, “This isn’t about whether we agree with people’s lifestyles, or don’t agree. We know the Biblical laws. This is about whether people are hung from cranes, murdered, beheaded, put in cages and burned to death. Is that the future we want for our Palestinian brothers and sisters under Hamas?”

He said the Holocaust was a genocide that was “one too many” and then went on the list the genocides in Rwanda, Cambodia, Kosovo, and Armenia among others. “And that genocidal, tyrannical government that took over in Gush Katif, that brutalizes the Palestinian people and sees in a Palestinian child nothing but a walking, bullet-proof vest and for a terrorist to wear during a war with Israel.” He added, “Our Palestinian brothers and sisters are created equally in the image of God. Israel is the light.”

Boteach added, “We have taken no one’s land and we are under no —- to give any land.”

Sholomo Keshet and Eliav Diekshtein of Saboneto displayed their unique soaps at the event. Keshet started the company five years ago to help their son, Elnatan — who was born with Down Syndrome — with the opportunity to work. It is located in Kochav HaShachar, Israel. 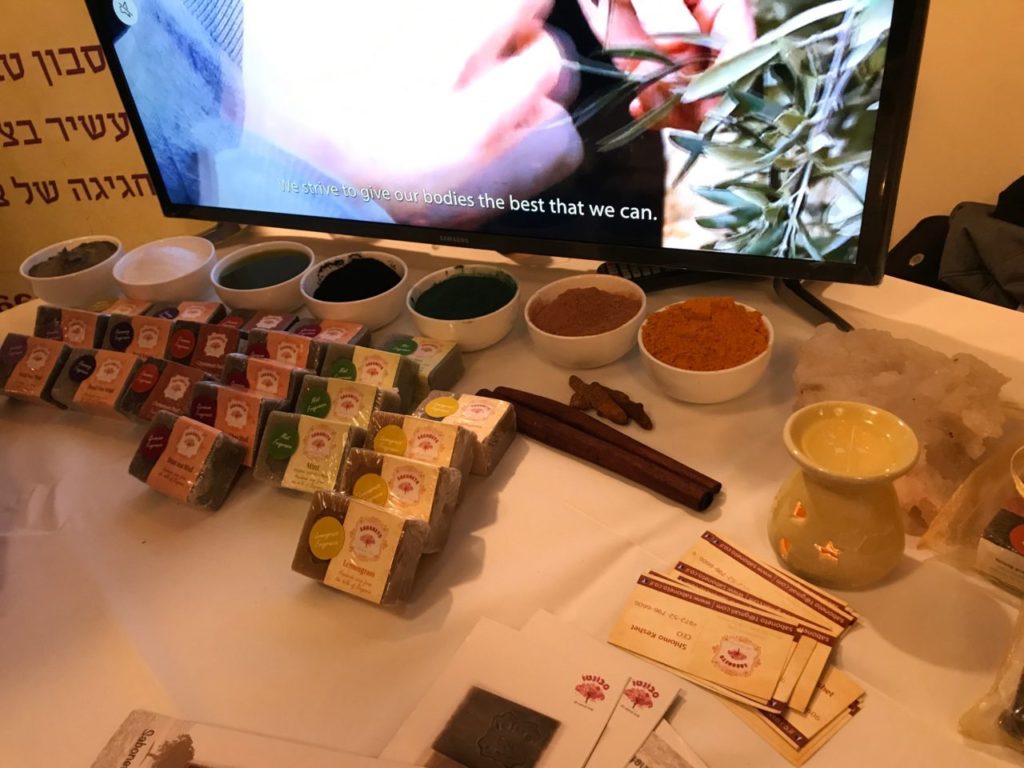 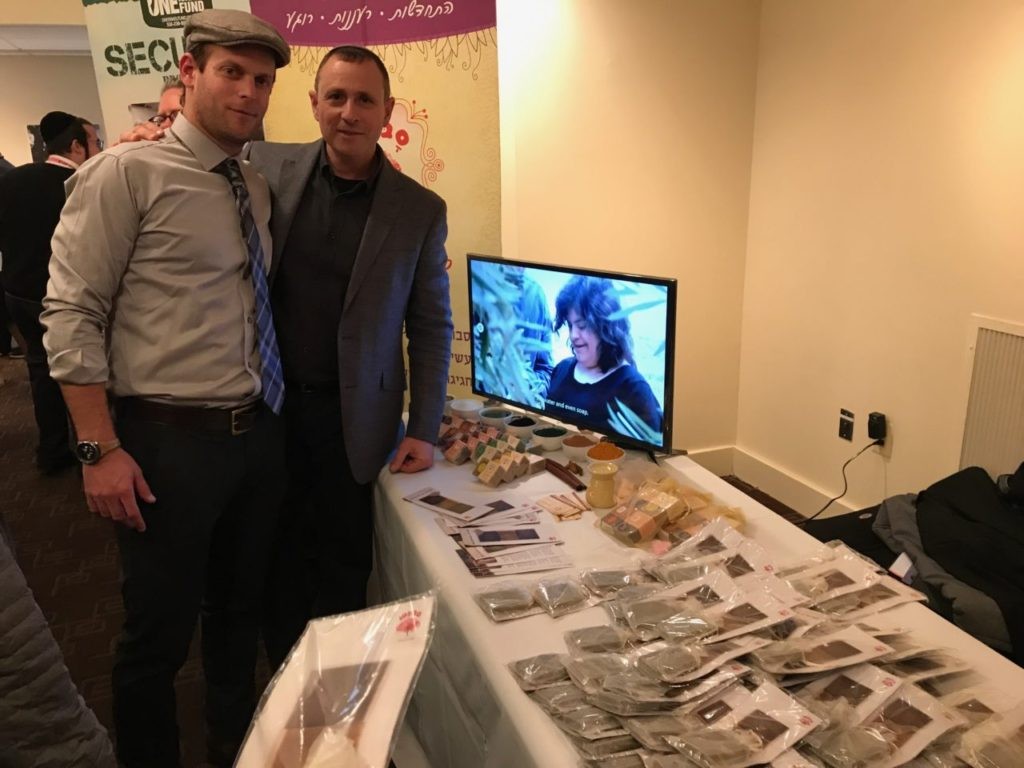 Asked if the anti-Israel BDS movement has affected his business, Diekshtein said, “yes. Of course.” Asked how they are combatting this effort against them, he said, “we are trying to sell more. That’s all.” One of the main reasons they were at the event on Monday was to acquire more clients in the United States. “This is one of the reasons that we are here. We except to develop ourselves even with what the BDS movement is doing because we believe that we build positive things. And we believe if you build positive things, you win against the bad things. That’s all.”

“I think it is time to apply the Israeli law in Judea and Samaria,” Naftali Bennett, who has served as Israel’s Minister of Education since 2015, said. “I could say the reason for this is very simple: ‘Because it’s ours.'”

He said that while he understands not everyone will agree with that argument, there is a logical argument which is:

We have been living in a temporary situation in the last 50 years… it has lasted for way too long. The Jordanians have signed away any interest in coming back into the region. The British have handed over the mandate saying that they understand that they made a big enough mess in the region and want somebody else to come and clean it up. And even the Ottomans and the Turks have their hands full dealing with their own issues, that we shouldn’t fear they are coming back to the region. All these reasons amount to a desperate need to apply the Israeli law in Judea and Samaria immediately.

Dr. Yuval Steinitz, Israel’s Minister of National Infrastructure, Energy and Water Resources said, “Israel cannot survive without Judea and Samaria.” Steinitz is also in charge of Israel Atomic Energy Commission and a member of the Security Cabinet. “It’s impossible from a strategic point of view to defend Tel Aviv and Jerusalem from the coastal plains of Judea and Samaria are in the hands of the Palestinians,” he said.

Ayelet Shaked the minister of justice for Israel’s Knesset, said the paradigm of the two-state solution is no longer relevant. “I see that now people understand that the gap between Israel and the Palestinians is much too wide to be bridged and that you need to think out of the box.” 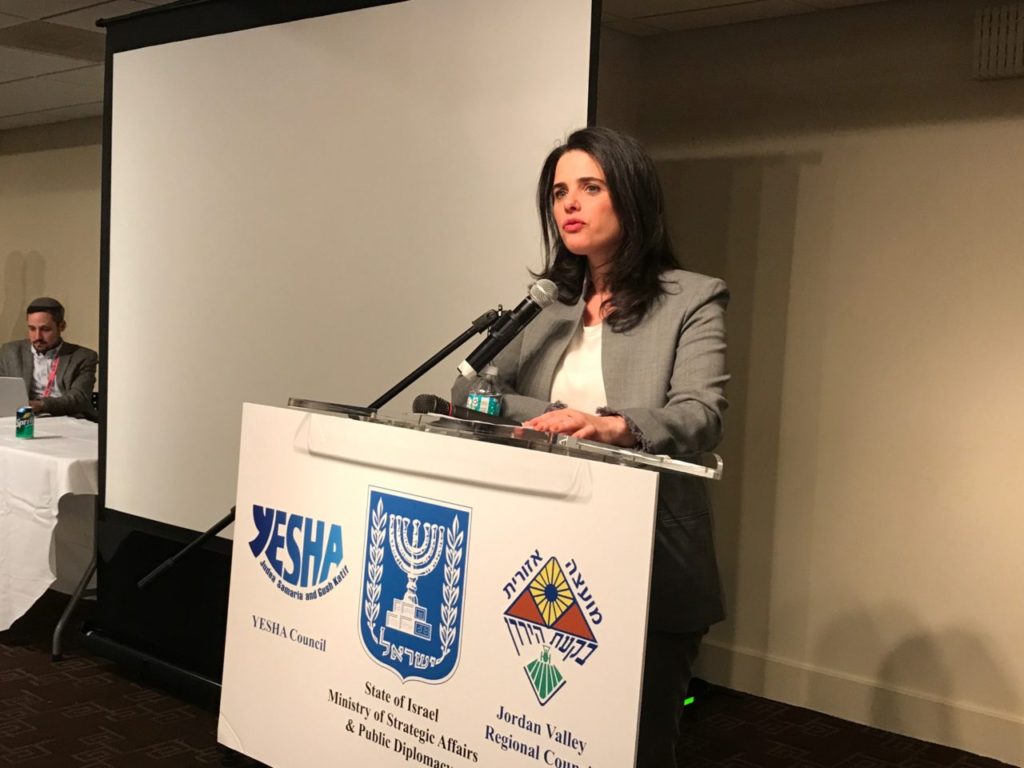 She added, “this president, by the way, is a brave president and thinks out of the box. The fact that he is going to move the embassy to Jerusalem is amazing … He is just applying the American law. The American law is, by the way, a consensus of Democrats and Republicans. They all think the embassy should be in Jerusalem but up until now no one did it. So we definitely congratulate President Trump. He is a great president and we will be more than happy to host him in May in Israel.” Shaked said, “I heard that the Prime Minister [Benjamin Netanyahu] invited him to open the embassy. It will be a huge, huge event.”

Joe Wilson (R-SC) also spoke at the event, saying, “We know that if they do succeed, this is just the beginning. … we know the BDS movement is just about Judea and Samaria. It’s about the entire Jewish State.”

On Tuesday, Wilson spoke on the House floor about House Resolution 728, a bill he introduced that condemns the U.N. Human Rights Council for unfairly targeting Israel.

Today, I spoke on the House floor about H. Res. 728, my bill that condemns the UNHRC for unfairly targeting Israel. I also discussed my participation at the AIPAC Policy Conference and thanked Israel Prime Minister Benjamin Netanyahu for his visit to Congress.

Michael D. Evans, the president and founder of the Friends of Zion Museum in Jerusalem, spoke of Christain support for the Jewish state at Monday’s YESHA event. “We are Bible believers and we say Judea and Samaria is Biblical land,” he said. “The majority of Zionists in the world are not Jewish. They are actually Christian zionists. Evans noted that the last words that Jesus spoke were, “you shall be a witness unto me in Jerusalem, Judea and Samaria.” He added, “We support you. You are not alone. Be encouraged. This is not just your fight. This is our fight also. God bless you.”