TEL AVIV – At least 10 of the 16 Palestinians said to have been killed during Hamas-planned violent riots along the Gaza border were known terrorists, the IDF said Saturday.

The army published a list of the terrorists along with their positions in various terror groups – with eight of them coming from Hamas. They were killed during riots in which rocks, firebombs and Molotov cocktails were hurled at Israeli soldiers from a crowd of some 30,000 Gazans attempting to storm the border fence. There was at least one instance of live fire as a rioter shot at IDF troops.

The “March of the Return” was initially billed as a “non-violent” protest that organizers promised would take place a half-mile away from the border fence, with no attempts to breach it. 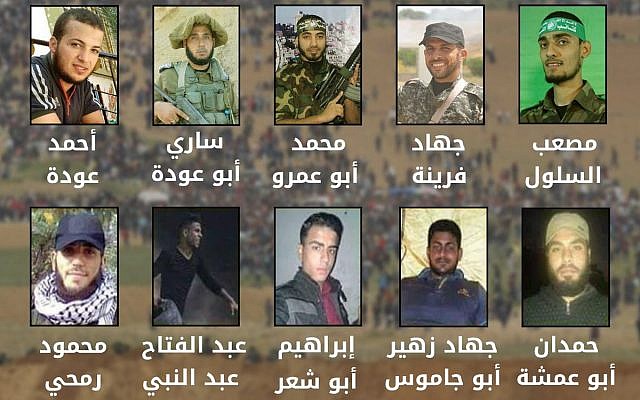 Only rioters who explicitly used violence against IDF soldiers or were seen damaging or breaching the security fence were targeted, the army said.

Hamas admitted that five members of its military arm, the Izz ad-Din al-Qassam Brigades, were among the dead but also claimed they were simply participating “in popular events side-by-side with their people.”

At least one of the fatalities, Sari Abu Odeh, was part of Hamas’ elite Nukhba force and another, Muhammad Abu Amro, was working on underground terror tunnels.

Funerals for 14 of those killed were attended by thousands, with mourners waving Palestinian flags and calling for “revenge” with shots fired into the air.

At one funeral, mourners chanted for the Arab and Muslim world to intervene against Israel on their behalf.

IDF Spokesman Brig. Gen. Ronen Manelis said on Saturday that there had been “a violent, terrorist demonstration at six points” along the fence.

Manelis added that Israel “will not allow a massive breach of the fence into Israeli territory” and added that if violence continues, “we will not be able to continue limiting our activity to the fence area and will act against these terror organizations in other places too.”

Friday’s “day of rage” coincided with both Passover eve and Palestinian Land Day, which marks events in 1976 that reflect the Palestinians’ struggle to own the land. The protest will be ongoing until Nakba Day – the day of “catastrophe” that marks the establishment of the State of Israel.