“Two Israelis and two Palestinians killed in West Bank violence,” is the title of The Guardian’s article.

A screenshot of the online version of the headline is below: 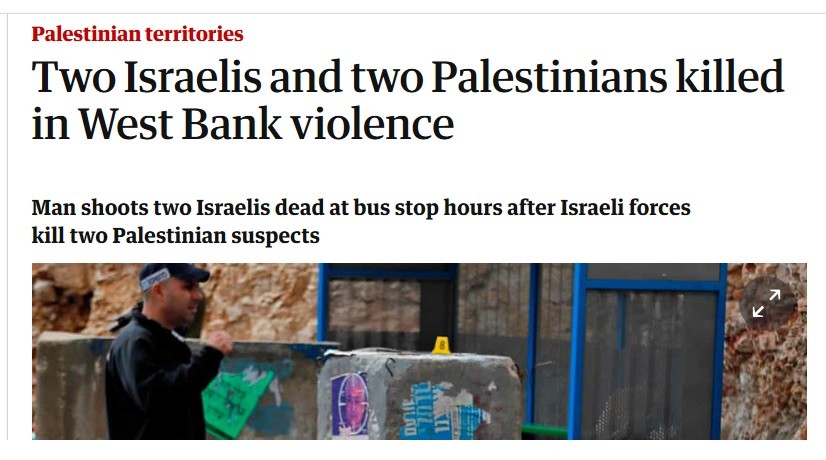 The two Israelis referenced were both killed when a Palestinian terrorist opened fire at a bus stop near the West Bank Jewish outpost of Givat Assaf earlier today. A third Israeli was gravely injured in the assault.

It would later be reported that the two victims were identified as off-duty Israeli soldiers — Staff Sgt. Yovel Mor Yosef, 20, and Sgt. Yosef Cohen, 19.

At the time of The Guardian article’s publication, it was not known whether the victims were soldiers or civilians, as the article itself makes clear:

“A Palestinian opened fire at a bus stop killing 2 Israelis, severely injuring 1 & injuring others at Asaf Junction, north of Jerusalem,” the Israeli military said on Twitter on Thursday. An army spokesperson was unable to confirm reports that the assailant had targeted Israeli soldiers.

Meanwhile, the two Palestinians referenced in the headline as being “killed” alongside the two Israelis were both terrorists wanted for deadly attacks who were reportedly killed while attacking or attepting to attack Israeli security forces conducting arrest raids.

The Guardian article reported further down:

One of the Palestinians was Salah Barghouti, a 29-year-old accused of shooting at Israelis on Sunday at a bus stop near the Ofra settlement. That attack wounded seven people including a woman who was seven months pregnant.

The other Palestinian killed by Israeli forces overnight had been suspected of shooting two Israelis dead two months ago. Ashraf Naalwa, 23, was killed when forces tried to arrest him near Nablus, Israel’s Shin Bet security service said.

On its Twitter handle, the Israel Defense Forces spotlighted the offending Guardian article:

2 Israelis: our soldiers guarding a civilian bus stop when a Palestinian terrorist shot them.
2 Palestinians: terrorists who opened fire on innocent Israelis, murdering 3 civilians, including a 4-day-old baby.

The Guardian piece has not been updated as of this writing.